I quantum chemistry literatute one can find a statement about projection of the angular momentum on internuclear axis:

The angular momentum vector for rotation about the bond will lie along the bond axis. This vector represents the component of the total angular momentum vector along the internuclear axis. As in the atomic case, quantum mechanics restricts the values of the component of the total angular momentum vector along a given axis to integral multiples of (h/2p). The quantum number in this case is denoted by the Greek letter $\lambda$. It is analogous to the quantum number m in the atomic case. The possible values for $\lambda$ are $0,1,2,3,\ldots$ The molecular orbitals are labelled according to the values of the quantum number $\lambda$. When $\lambda = 0$, they are called $\sigma$ orbitals; when $\lambda = 1$, $\pi$ orbitals, etc. This is analogous to the labelling of the atomic orbitals as $s, p, d, \ldots$ , as determined by their $\ell$ value.

But I can't find any sources for the proof or strict mathematical treatment of this statement. 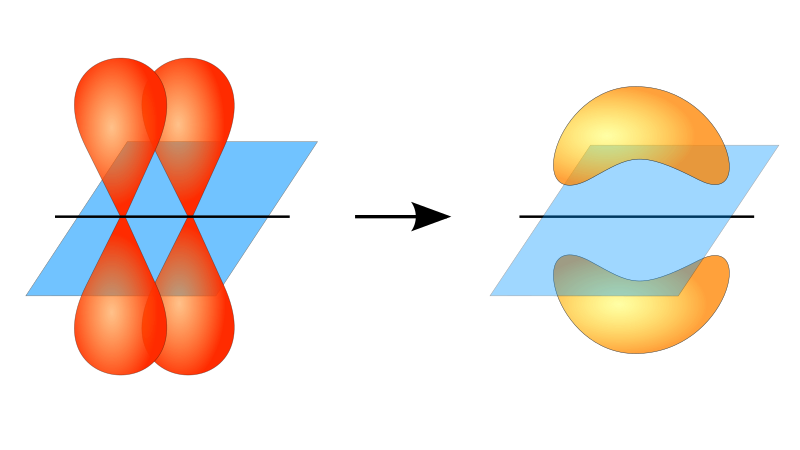 As we know for $p$ orbitals, it describe the state with angular momentum $l=1$, and $m_z = 0$ ($z$ axis perpendicular to the plane in picture) and the direction along internuclear axis undefined for individual $p_z$ orbitals. How can one show for simplest model MO - LCAO $\pi = c_1 p_{z_1} +c_2 p_{z_2}$, the projection of the angular momentum on internuclear axis should be $1$?

Not the answer you're looking for? Browse other questions tagged angular-momentum orbitals quantum-chemistry or ask your own question.