There is a lot of helpful information (and some great animations) on Daniel Russell's page with Acoustics and Vibration animations.

And the reflected wave amplitude is given by

Some of the bouncing of the waves is shown in this diagram: 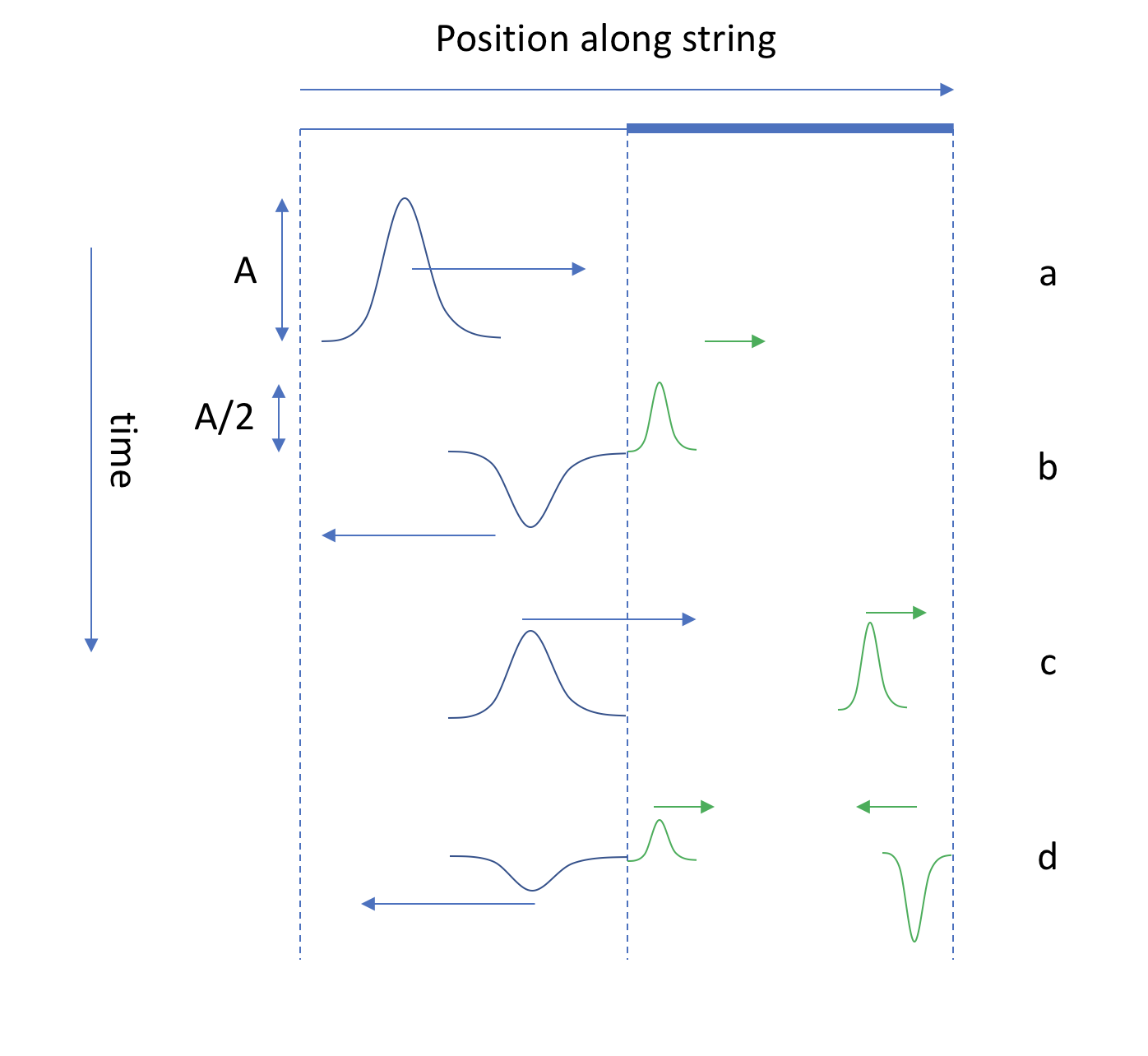 At (a), a single pulse it traveling to the right. It partially reflects at the boundary, and a pulse of half the amplitude (and 1/3 of the wavelength) continues to the right, while the remainder is reflected and inverted at (b). At (c), the wave on the left has returned, while the one on the right is still traveling to the right. Another transmission/reflection happens, and you get an even smaller fraction of the wave on the left and a second pulse on the right at (d). If you continued this diagram, you would see that the motion on left and right is an infinite summation of waves of different amplitudes and timings; a steady state solution can only exist for certain frequencies, which we will compute below.

This diagram is what it would look like if you could give a short "kick" to the left end of the string, and watched the waves propagate. As these pulses travel back and forth, it will usually happen that the higher frequencies are damped and you are left with a standing wave. In principle you can do the same diagram with sine waves, but it would quickly look very mess - so let's go to the mathematical treatment instead:

It is known that the propagation velocity of the wave is proportional to the inverse square root of the mass per unit length; so if you have half the string at density $\rho$ and the other half at density $9\rho$, then the wave travels 3x faster in the thinner part of the string - and there should be more waves in the thick part.

To draw this, you need to find a function that is continuous in both amplitude (so string doesn't break) and the first derivative (otherwise there will be infinite acceleration at the "kink" until it's smooth again). This means that to the left of the center, it's of the form

(Using the $\sin$ basis function like this we enforce the boundary conditions at x=0 and x=2L).

Continuity of amplitude implies that

and continuity of first derivative:

Now we can solve for the wave number $k$ and the ratio of amplitudes in the two halves of the string. Putting $A_1=1$ for simplicity, we can divide the two equations by each other and find that

I am not smart enough to solve that equation - but Wolfram Alpha is. It gives me

Here are plots of 4 different harmonics calculated from the above: 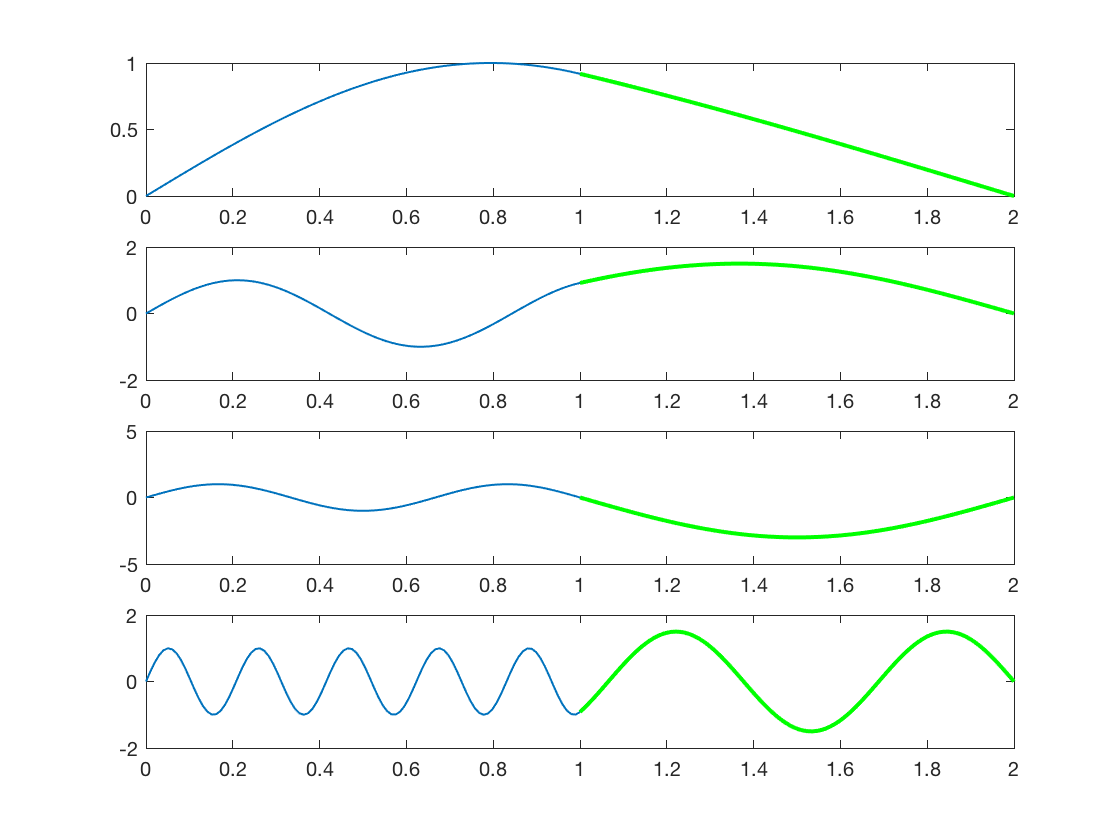 Interestingly, for the trivial mode where there is a node at the junction, the ratio of amplitudes of the waves needed for continuity is different (3:1 vs 1.5 : 1). Not sure why that is.

Disclaimer: it's possible there was a mistake in my math above... but I'm pretty sure that the principles are sound.

Thinking about standing waves in terms of reflections from the discontinuity in the middle is a recipe for confusion. Here’s an easier solution.

Let's assume that I observe standing waves at a frequency $f1,f2,f3$... what would be the shape of the string. It can't be simple one loop,two loops, three loops respectively, as the wavelength of the wave changes when we go from one side to the other.

Since second part is nine times as dense than the first part, and tension in both strings is same, clearly,$$ v_1 = 3v_2$$

So wavelengths in the parts will be related as $\lambda_1 = 3\lambda_2$ as frequency of the wave will remain the same throughout the string. So the string, in its fundamental frequency, will look something like:

Now let's look at this:

(By being in phase I mean they will oscillate on the same side of the string, and I assume you meant the same)

This is because $W_1$ will undergo a $\pi$ shift in phase when reflected at junction $B$. Also, by the time $W_2$ will travel from B to C and back to B, $W_1$ will have traveled from B to A and back three times. The $W_2$ reflected at C will undergo $\pi$ shift, and hence when it enters the first part at B, it will be in phase with the initial wave.

Hope that made sense. Otherwise, let me know in the comments..

I basically conclude that a standing wave comparable to that in a homogeneous string is not possible. Here is the explanation:

For a wave on a string, the fundamental vibration frequency (the lowest frequency which will result in a standing wave) is: $$f_1 = {\sqrt{T\over{m/L}}\over2L}\quad \tag1$$ from Ref, where $T$, $m$, and $L$ are the rope section tension, mass, and length.

Higher vibration frequencies $f_2$, $f_3$... (called harmonics), which are integer multiples of the basic frequency, are achieved here by increasing tension in multiples of $T$. At these frequencies where standing waves are visible, the visible wave is the sum of waves travelling to the left and to the right along the string (see animation, where yellow is a sum of blue (moving left) and green (moving right)).

If your string has two or more sections with different mass per unit lengths, then in order to achieve a standing wave at a particular frequency:

We can fulfill conditions 1 and 2 it seems, provided the string sections are vibrating at different harmonics. In your question, where one section has 9 times the linear density of another, so:

If you choose to visualise the motion of the waves using the wave amplitude equation:

$y = A\sin({\omega t + \phi})\tag2$ from Ref, where $y$ is the vertical position where two rope sections meet, $\omega$ is the angular frequency of the vibration and $\phi$ is the phase/shift angle of the wave (constant), you reach the same constraint since:

Not the answer you're looking for? Browse other questions tagged classical-mechanics waves frequency string or ask your own question.