Collider physics; what is a jet residual?

I'm looking at a list of jet parameters (in a .root file). One of them is called JetResidual. It's there alongside parameters like JetEta and JetMass.

Does that parameter have a common meaning? It dosn't seem to appear much in jet tagging papers.

If anyone had a source that contained definitions of common jet parameters that would be really useful.

This is a CMS paper Jets at CMS and the determination of their energy scale. It concerns energy corrections of jets. The monte carlo simulated events are used as the interest is to get the energy that will represent a gluon or a quark, which hadronizing into a jet will manifest in the detectors. Using the simulations to correct for detectors and event overlaps to start with.

I will quote the part relevant to the term "residual":

As these jets of particles propagate through the CMS detector, they leave signals in components such as the tracker and the electromagnetic and hadronic calorimeters. These signals are combined using jet algorithms to form a reconstructed jet. However, the energy of the reconstructed jets does not correspond to the true particle-level energy, which is independent of detector response. The jet energy corrections relate these two values; the detailed understanding of the jet energy scale is of crucial importance for many physics analyses, and it is often an important component of their systematic uncertainty.

These analyses show that the previous calibration steps are working as expected and only minor differences in the jet energy scale between simulation and data are observed. As depicted in Figure 2, these differences are of the order of 1% in the central detector region and below 5% in the region up to |η| <2.5. However, these small remaining differences are explicitly corrected for in data in the residual correction step, which completes the jet energy correction chain.

As a result of the calibration procedure, the energy scale is known to the percent level over a wide range of the available phase space 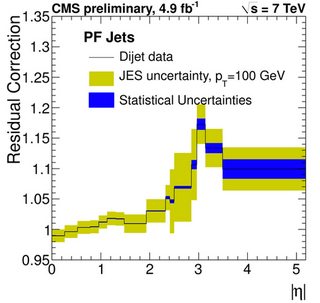 where eta is the pseudorapidity.

So the residual is the necessary extra correction applied between energies measured through the instrumentation and the energy in the theoretical model, after the corrections for the detectors and event overlaps have been applied.

You should read the paper, but these methods are for this particular detector and experiment. The term residual is a mathematical term meaning "left over", and it will depend on the specific analysis on what the term refers. In this case it refers to extra small corrections needed after the detector biases and events overlaps are corrected for.

Not the answer you're looking for? Browse other questions tagged particle-physics terminology software large-hadron-collider or ask your own question.