Every book I have read gave example where two things are going parallel or opposite of me. But I've never found any example with an angle.

You could always break the question into two perpendicular directions

Horizontal Direction:
$ (v_2 \cos A -v_1) $ is the velocity of your friend in the horizontal direction relative to you.

Vertical Direction:
$ (v_2 \sin A) $ is the velocity of your friend in the vertical direction relative to you.
Nothing changes as your entire velocity is in the horizontal direction.

which diagrammatically is as follows with $g$ as the ground. 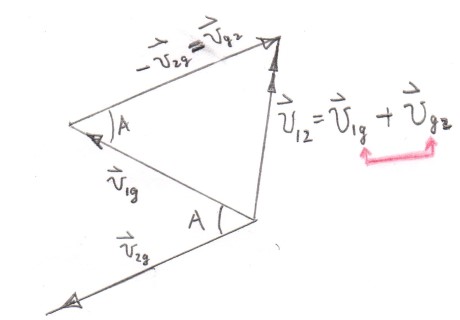 Not the answer you're looking for? Browse other questions tagged homework-and-exercises kinematics vectors relative-motion or ask your own question.

1
Time when two particles will meet