In a discussion with my astrophysics lecturer, we ended up talking about virtual particles. One of the most astonishing phenomena he pointed out was the fact that annihilation of virtual particles produces no light, even tho real particles clearly do. We then started thinking of the Casimir effect, where you close down two plates, Casimir plates, so close to each other that a force arises (the space is tiny, barely enough for 1 electron). The main reason is due to virtual particles appearing on the different sides of the plates.

Now let's take a positron that is on the other side of the plate and has no way of interacting with it's pair electron inside, what would happen if it were to annihilate this virtual positron with a real electron? Would you get light and if so how much of it would you get?

Here is a clear illustration of what a virtual particle is:

Only lines entering or leaving the diagram represent observable particles. Here two electrons enter, exchange a photon, and then exit. The time and space axes are usually not indicated. The vertical direction indicates the progress of time upward, but the horizontal spacing does not give the distance between the particles.

It is an internal line in a Feynman diagram , it has the label of a particle from the standard model table, , it has the quantum numbers of the particle, BUT is off mass shell, i.e. its mass is not the mass in the table. A virtual particle is a useful tool to keep count of quantum number conservation and the Feynman diagram is a recipe for writing down and calculating the integral which will give the interaction cross section for the incoming particles with given four momenta to come away as outgoing real on mass shell particles.

The main reason is due to virtual particles appearing on the different sides of the plates.

You must be talking of the static casimir effect as described here: 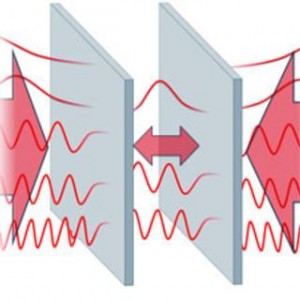 According to the concepts of modern Physics, vacuum is not really an empty space devoid of any material existence. It is filled with electromagnetic waves of varying wavelengths having a substantial amount of energy associated with them.

When two parallel mirrors are placed in a vacuum, the gap between them being smaller than the wavelength of these particles, the latter cease to exist in this space. Hence, the vacuum pressure in the gap becomes far lesser than the pressure in the surroundings, resulting in a force which pulls the two mirrors together. The Casimir effect thus produced is also known as the static Casimir effect.

Note that the wavy lines in the graphic represent real photons permeating all space , real means that their four vectors are on mass shell, i.e. mass zero, and they carry energy= h.nu, where h is the planck constant and nu is the frequency of the wave. Photons do exert pressure because they carry momentum, and this attractive effect is explained by the reduction in the real photons due to the existence of the thick plates and the small distcance. Note REAL photons . (virtual photons can have no single wavelength because they are off mass shell).

Now let's take a positron that is on the other side of the plate and has no way of interacting with it's pair electron inside, what would happen if it were to annihilate this virtual positron with a real electron? Would you get light and if so how much of it would you get?

You are confusing loop virtual pairs of e+e- with this explanation of the Casimir effect which is on real photons outside, diminished in numbers between the plates. There are no positrons or electrons running around, even in vacuum.

Vacuum fluctuations of e+e- pairs need energy to manifest into real e+e- that can be measured.

It is true that Hawking radiation is expected to occur as a result of the existence of vacuum fluctuations, but these can only manifest into on mass real particles by interacting with a field or a real particle. An e+e- pair has at least the invariant mass of 2m_e whereas a virtual loop has zero energy, thus energy conservation would be violated by free appearing disappearing real particles. The loops separate and generate the radiation by taking energy from the gravitational field of the black hole. 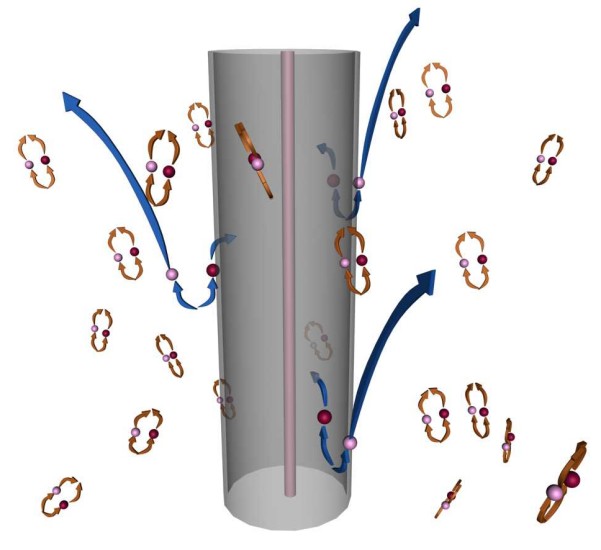 An illustration, not a calculation. The open loops take energy from the gravitational field of the black hole.

Not the answer you're looking for? Browse other questions tagged virtual-particles pair-production casimir-effect or ask your own question.

5
Are "virtual particles" is just an analogy?

0
Trying to visualize virtual particle behavior near "real" particles
2
Why won't this Casimir effect perpetual motion machine work?
7
Why does an electron react differently to a virtual photon in the interaction between two electrons and between an electron and a positron?
2
How is the dynamic Casimir effect different from normal radiation from accelerating charges?
3
Solving a Casimir configuration, the U - bracket
0
Real particles gets replaced by virtual ones all the time?