Gravitational potential at the center of a uniform sphere

Feynman in second Messenger Lecture said that potential at the center of ball with small radius $a$ is equal to average potential on surface of ball minus $G$ times mass inside the ball divided by $2a$. You can see it on the picture. I don't understand that. I had an idea that it is from Taylor series of potential at the centre, but I can't figure it out. Can you help me? 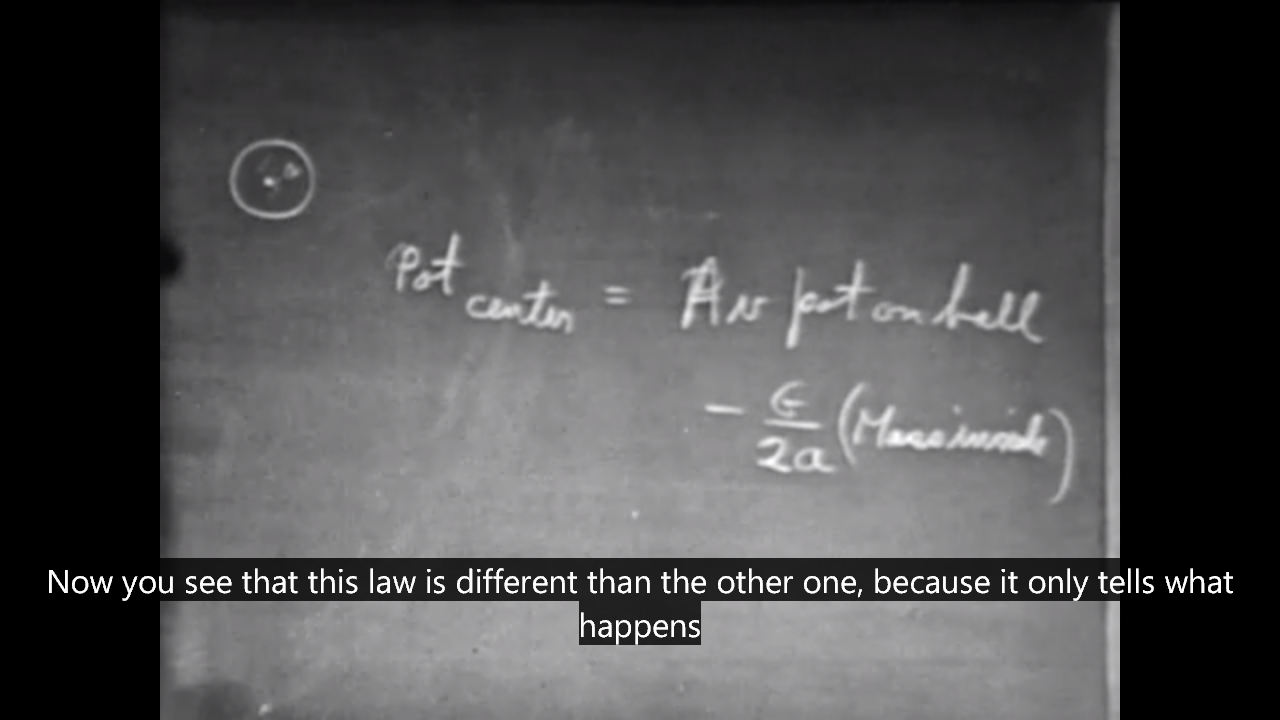 Feynman's talking about a ball, which means that he is talking about a solid sphere, with uniform density, which I shall call $\rho$. You can apply Gauss's law for gravity to then calculate the potential.

where F is the g-field, A is a surface area and M is the mass enclosed by our Gaussian surface.

Let's say that our ball has radius $a$. We can imagine a Gaussian sphere, of radius $r < a$ which encloses some mass $\rho V$ where V is the volume of our Gaussian sphere (we can use multiplication instead of integration here because it's a uniform sphere). Call A the Gaussian area and by symmetry, $\int FdA = FA$, so that we can write, for our Gaussian sphere:

The above result holds only if the field due to matter outside the sphere is the same at the center and on the surface. If not the work done will depend on where on the surface you move to, since every point on the surface is not equidistant from external matter. If the ball is small enough, a criterion which Feynman mentions, then there's not much difference between different points on the surface or at the center, so you can approximate the field as constant on the ball.

Feynman's answer does not refer to a sphere filled with uniform mass density. It is a completely general statement about the potential at the center of a (small enough) sphere given an arbitrary mass distribution. It is a different way of stating Newton's law of gravitation. It can be derived from the differential formulation of Newton's law (ΔΦ = 4πG ρ) with the help of the full-space Green's function G(r,r')=-1/(4 π |r-r'|).

Not the answer you're looking for? Browse other questions tagged newtonian-gravity symmetry potential or ask your own question.

4
When to use method of images in Electrostatics?
2
Calculating the potential of 2 spherical perfect conductors with the image method
4
A confusion regarding an example in The Feynman Lectures
1
What is the gravitational/electric/inverse-square field inside a cylinder?
1
Potential inside a hollow sphere (spherical shell) given potential at surface
1
How can be $\frac{1}{4\pi R^2}\int_{S}V_{ext}(R)da= V_{ext}(0)$ physically explained?
0
About the electric field inside a capacitor