Let's assume that the existance of the graviton is proved theoretically or it is detected by the LHC and there is found a way for Pilot Wave Theory for it to account to special relativity via the constructive quantum field theory. Is there a way for any interpretation to be proven theoretically(because they all make the same experimental predictions) correct(Copenhagen,many worlds, pilot wave (my personal favourite)etc. (thus creating a Theory Of Everything)?

Is there a way for any interpretation to be proven theoretically

No. The word interpretation and the concept of "proof" are incompatible. One can prove a theorem in an axiomatic mathematical theory, and write "quod erat demonstrandum." Physics theories use axiomatic mathematics and impose extra axioms called "postulates", "laws" "principles" to choose a subset of the mathematical solutions that fit the data; modeling the data is the objective.

You are enumerating different physics models which use different mathematics to fit the data , and you are assuming they all fit the data well, with equal accuracy within errors . If this ever becomes true, there is no way to chose between the mathematics, and call that "real". The only comparison tool would be simplicity of calculations.

Here is an example of using complete sets of functions to mathematically model a photograph. 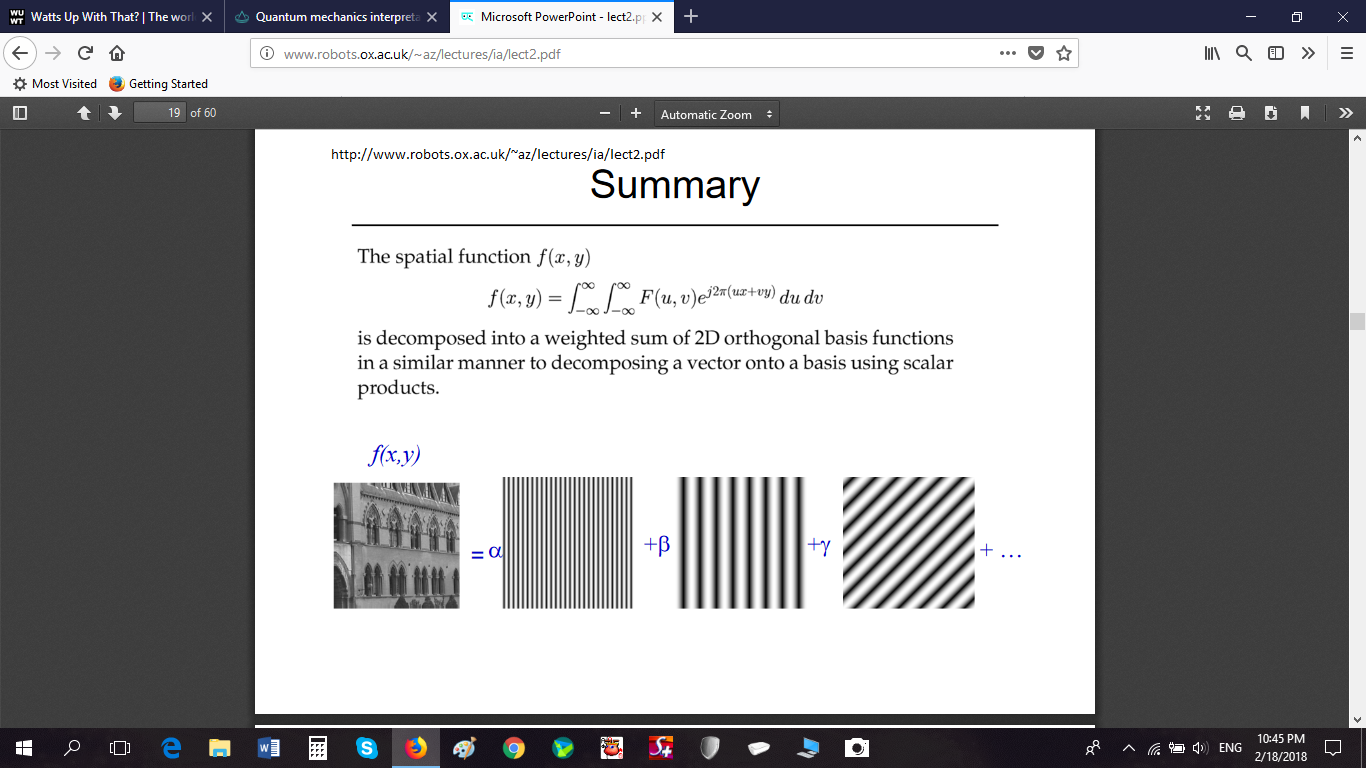 The photograph is the data which is modeled by the mathematics in a series expansion using fourier transforms and summed on the right. The physical theoretical model.

One interpretation is given by these α β γ ... that build up the photograph, based on fourier transforms.

Suppose another set of complete functions did the same mathematical job as well as the α β γ above, call them a b c d ..... Do you see a way of proving one as correct/real and the other as false/unreal as long as the exact photo is reproduced?

In physics it is the data that always check a mathematical theory. If two theories explain equally well the same data, the only choice is simplicity of calculations, not "correct" because they are both correct in describing the objective, the data.

There is not currently any experimental prediction that distinguishes the various interpretations. That is, they all predict the same thing, but employ different concepts to do so.

They differ mainly in how they suggest further developments can be made, and in how well they integrate with the concepts employed in other physical theories and other scientific fields.

For example, Pilot Wave Theory reasserts causality, whereas the Copenhagen interpretation rejects causality. Physicists have tended to have a pet interpretation to which they personally subscribe, but differences in preference (and the reasons for adopting one interpretation over another) essentially come down to matters of taste rather than scientific proof or robust reasoning.

Not the answer you're looking for? Browse other questions tagged quantum-mechanics quantum-field-theory particle-physics quantum-interpretations theory-of-everything or ask your own question.

8
Can a super-positioned human be used to differentiate between the Copenhagen interpretation and many-worlds?
2
In Bohmian mechanics, how does the particle's position affect where a particle is detected?
5
Does QFT prevent preparation of an entangled particle pair as in EPR experiment?
10
Is Bohmian mechanics really incompatible with relativity?
5
Does the various interpretation of quantum mechanics have any impact on how we interpret quantum field theory?