Plane wave focused by lens to a point

I want to mathematically recover the situation in the following picture, that is a plane wave which is incident on a (thin) lens, such that the outgoing beam focuses to a finite spot size at a distance equal to the focal length of the lens.

I have plot it on Mathematica, just looking at the $x$-axis so $y = 0$, I get a constant curvature in the correct direction but never a focus: 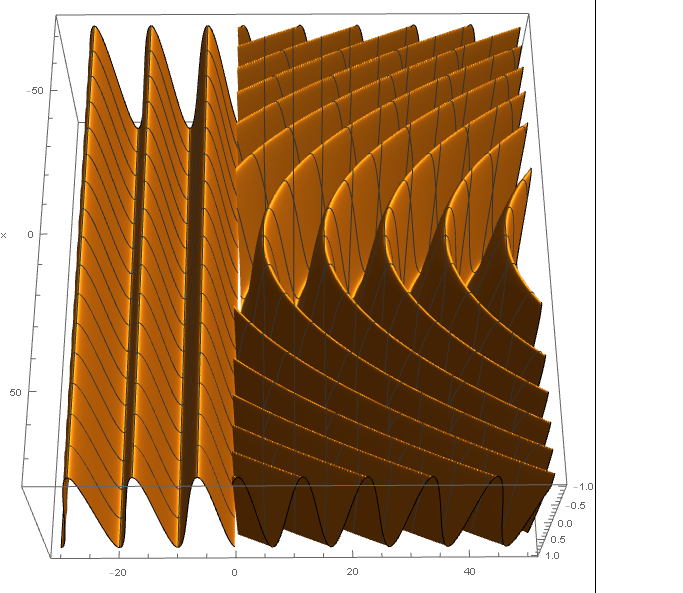 (the horizontal axis is $z$, the direction of propagation)

I checked for very large $z$ and it never goes to a spot.

Is this because I am using the thin lens approximation?

The equations you write are not those of a focussing wave (I think you're missing an $i\,\pi$ in your exponent for the $x$ variation for $z>0$). There is no way for the wavefront curvature to change with $z$ in your equations, thus no focussing. You need to model the effect of diffraction on your wavefront.

The easiest way to model diffraction is to assume a Gaussian intensity variation in the input, instead of a plane wave as you have done. You simply have to have the spotsize large enough to model the beamwidth you are dealing with. Then you impart the thin lens phase mask so that the field at $z=0$ which is immediately to the right of the lens output has the $x$ variation:

One can model the effect of diffraction on a field variation like this by taking heed of the following formula for the propagation of a generalized Gaussian beam in a homogeneous medium:

Note that the above is not the exact scalar diffraction operator; it makes a paraxial approximation that the transverse component $k_x$ of the wavevector is small compared to $k$; alternatively, that the beam's numerical aperture is small (less than about 0.3, depending on the accuracy you need).

Otherwise, you need to calculate the exact diffraction integral, which I outline below.

You begin with the Helmholtz equation in a homogeneous medium $(\nabla^2 + k^2)\psi = 0$. If the field comprises only plane waves in the positive $z$ direction then we can represent the diffraction of any scalar field on any transverse (of the form $z=c$) plane by:

To understand this, let's put carefully into words the algorithmic steps encoded in these two equations:

Here is a short, well tested Mathematica code of mine to implement the above. In the following $f$ is a square array of complex values of the input field, $d$ the axial ($z$) distance we wish to diffract the wave, $k$ the wavenumber and $Dx,\,Dy$ are the widths of the simulation domain in the $x$ and $y$ directions. It is easy to modify this code to cope with one transverse direction.

Ok, so first I'll note that if you're interested in thinking about how the phase fronts of optical waves propagate through free space and are modified when passing through a lens then that means you are interested in Fourier Optics. I highly recommend Fundamentals of Photonics by Saleh and Teich to learn about this question and more.

It's sounds like your goal is to simulate the phase pattern of a beam of light as it hits a lens and then propagates towards its focus. To understand how to do this we need to work out some initial details.

If the field we are describing is a plane wave travelling directly in the $z$ direction then you have already given us the answer. As the wave propagates it picks up phase at a rate of $2\pi$ radians per distance $\lambda$. This is ratio is captured by the wavevector $k = \frac{2\pi}{\lambda}$. We can then calculate $f_1(x,y)$ as a function of $f_0(x,y)$ by

However, the next questions is where we start to get at the question in the OP. How must we change this picture if the wave is travelling at some angle $\theta$ with respect to the $z$ axis. Note, we do not change the direction of the $z$ axis, just the direction of the wave. Suppose the wave is pointing in the $+x$ and $+z$ directions but is still in the plane $xz$ plane. That is, we something like

What does this intuitively tell us? The phase factor intuitively tells us how much phase we pick up if we travel directly in the $z$ direction. If $k_x = 0$ and the wave is pointing directly in the $z$ direction we pick up a full $2\pi$ radians for each $\lambda$ we move to the right. However, as $k_x$ increases we pick up less and less phase as we travel to the right. This is because we're not moving in the exact direction of the wavevector. In fact, in the limit that $k_x = k_0$ we pick up NO phase as we travel right. This is because the plane wave is now pointed directly in the vertical direction. We will call this function the transfer function of free space. It tells us how $f_0$ transforms into $f_1$ depending on the value of $k_x$ and denote it by $T_{FS}(k_x)$.

Ok, we have one major piece to answer your question. We need one other piece and then we can put them together. We again need to think about what is the field due to this tilted plane wave on the plane at $z_0$. It is not too hard to answer. We get (see for yourself)

The first two terms here are constant complex numbers on the whole plane. However, the final term is a phase which varies sinusoidal in the $x$ direction with spatial wavelength given by $k_x = \frac{2\pi}{\lambda_x}$. (Note that we should think of $k_x$ as the spatial angular frequency of this function). We are see the projection of the periodicity of the plane wave onto the $z$ plane.

Ok now here comes the big kicker on which all of Fourier optics is based.

Imagine We had many plane waves (all with the same frequency) with differnt amplitudes and phases impinging upon and through the plane at $z_0$. Each one of these plane waves would contribute a modulation at a DIFFERENT spatial frequency. Let's describe the complex amplitude of the plane with transverse wavevector $k_x$ by $\tilde{F}(k_x)$. We can then write the total field as

Ah, this is what we were looking for! We see the spatial amplitude of the field at $z_0$, $f_0(x,y)$ is exactly the spatial Fourier transform of the function $\tilde{F}(k_x)$ describing the coefficients of the plane waves travelling with different wavevectors $k_x$

This is particularly great because know each of these different plane waves complex amplitude will propagate through free space, each one will get multiplied by $T_{FS}(k_x)$ for the corresponding $k_x$.

How does this all relate back to the problem at hand? Well, I just said that given a bunch of plane waves with amplitudes $\tilde{F}(k_x)$ that you can calculate $f_0(x,y)$. By Fourier inversion the opposite is true. Given a known field $f_0(x,y)$ you can calculate the plane wave which must be added up to create that field.

In your problem we consider $f_0(x,y)$ to be the field directly after the lens (which you have correctly calculated in your first paragraph but you have a typo in your last equation, there should be no $\lambda$). That is,

This will make the simulation a bit more complicated than what you've done so far but it should be possible. Using the correct program it should be possible to numerically simulate without too much trouble.. You can get analytic expression for the Fourier transforms but you need to make some approximations at various points.

There's probably more to be said here but I feel I've said enough already. I hope this can be helpful

*Why are the limits on the integral $-k_0$ to $+k_0$? Well, in a plane wave no component of the wavevector can exceed the total length of the wavevector, $k_0$, so $k_x$ is bounded by $-k_0$ and $k_0$. It turns out this is the limitation that leads to the fundamental diffraction limit on how small you can focus a beam of light (using far-field propagating plane waves). However, the diffraction limit is a topic for a different post. As a teaser, if you allow the components of the wavevector to become complex then you can have some of the other components exceed $k_0$. However, the expense is that the fields with these complex wavevectors will decay away exponentially. This is a statement of the fact that, using the near field, you can extract higher spatial resolution information.

You can never focus a finite-width beam down to spot because of diffraction (Rayleigh Criterion).

7
Optics Paradox?
1
Effect of slits and a lens
1
Phase delay in a thin lens?
0
Back Focal Plane After A Convergent Lens
0
If you have 2 lenses, is it better to place the stronger lens first or the other way around?
0
The sides of a spoon as concave/convex mirrors
1
Conjugation relation of an oil immersion objective
0
Interference pattern due to a thin prism and a lens
0
Deriving the thin lens formula from the lens maker formula