Each of the big theories of modern physics have a somewhat more "classical" equivalent, that is

I'm not 100% sure that they all agree 100% with all modern experiments (in particular the Lorentz aether theory was designed with electromagnetism in mind and might not work out with other fields), but they have the benefit of agreeing with the other theory at least as far as science was concerned when they were abandonned.

Can these theories work together in a decent facsimile of modern theories? That is, is it possible to define general relativity as a tensor field theory acting on some Lorentz aether, QFT as a Bohm-type theory on the Lorentz aether, and so forth? Or has this line of thinking never been explored due to being incredibly stupid?

Remember that Einstein himself was willing to admit the Lorentz aether theory - once all its expected mechanical features had been eliminated!

Relativity itself is still considered a "classical" theory. The struggle in the early 20th century was getting old-guard physicists like Lorentz to accept that this aether was not behaving in the way that any familiar, particulate mediums behave (where a wave is built atop a series of colliding particles, billiard-ball style), and instead the medium has to be seen in a wave-only fashion (without being further subdivided into colliding particles).

Really, what QM seems to show since, is that the true situation is the other way around from how the classical physicists had it - that particles seem to emerge from and be built atop waves, and it is the wave that is more fundamental. But waves (and fields) were already familiar concepts to classical physics - if there had been any resistance to accept them in the first place, dispute had died out by the end of the 19th century.

But I'm digressing, and to answer your question, yes, speaking in a very general way here, all modern physical theories that are hyped as overturning key features of the classical mindset, can still be conceived in a way that is consistent with it.

Even though we are all apt to perceive the meaning intuitively, defining exactly what "classical" means in this context can be a little tricky.

For Bohm for example, the key feature was determinism, but there are a spectrum of assumptions like this in "classical" scientific theories which many 20th century physicists have tried to jettison and do without. Which is why the "classical" versions of modern theory, like Bohm's have tended to seem to be theoretical stragglers, rather than being considered mainstream.

One big difference between classical and modern physics (from what I know) is that determinism doesn't effect on Quantum Mechanics. If for example, we have a particle and you know all about it (like velocity, position, mass,...), you are able to know not only the future, predict what will happen, but also where it comes from. In Quantum Mechanics there is no such thing like that, for example with the Schrodinger equation: 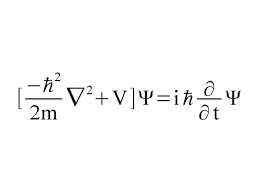 is a wave function. You have also the principle of uncertainty, that works with probability, so classical and modern physics could be in accord in few things, but not at all.

Not the answer you're looking for? Browse other questions tagged quantum-mechanics general-relativity special-relativity aether bohmian-mechanics or ask your own question.

4
The Higgs field a new Luminiferous aether?
1
Why dark matter and general relativity?
10
What is the experimental evidence that suggests space-time is curved?
24
Dependence of spin on classical vs non-classical physics?
2
QFT = QM + SR? for everyday people