This is problem 1463 from the Russian magazine Quant. Unfortunately my Russian is not good enough, so I apologize if the translation of the problem contains errors.

Problem. Inside a flat charge capacitor with distance between the plates $d$ a weakly conducting slab of thickness $h<d$ and resistivity $\rho$ is inserted. The area of the plates and the slab is $S$ (as always it is assumed $d\ll\sqrt{S}$). The capacitor is charged to potential $U_0$. Then the plates of the capacitor are short circuited. Find the maximal current across the slab.

I obtain a completely different answer $I_{max}=U_0 S/\rho d$ and think that their solution is flawed.

Let's show that their solution doesn't make any sense. In the official solution they draw the picture

where $C=\varepsilon_0S/(d-h)$ and $R=\rho h/S$, claiming that it is equivalent to the initial system. Then they say that after the short circuit the capacitor $C$ (which initially has been charged to voltage $U_0$) will discharge through resistance $R$. This means that it will take approximately time $RC$ for the capacitor to discharge.

Let's return to the initial system. We are free to assume that $\rho\to\infty$, $h\to 0$, so that $R$ is finite. Technically, this means that the slab is a very thin insulator placed inside the capacitor. So when the capacitor is short circuited, plate charges will disappear instantly due to current spike in the short circuit. This contradicts the official solution, where it takes time $RC$ to discharge the capacitor.

Q: So which of the answers is correct?

My solution is as follows:

The charges on the faces of the slab can not change abruptly, but the charges on the plates of the capacitor will change abruptly as a result of the short circuit. So the words "right after the short circuit" here means that we are considering the system when this spike of current across the wire connecting the plates has quickly adjusted the plate charges. 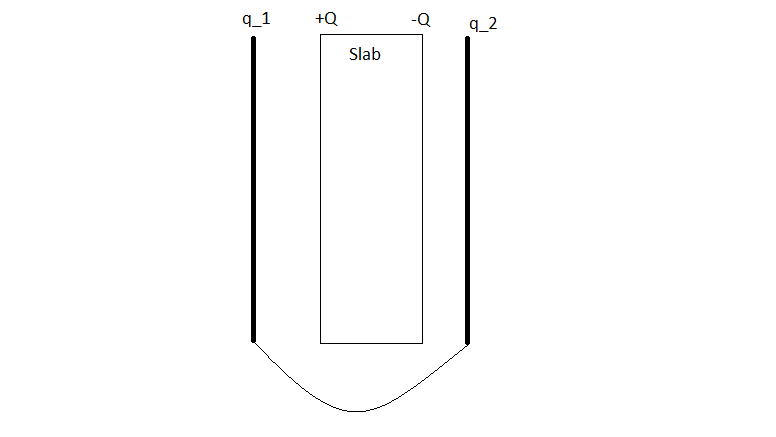 After giving it some thought, here is a new answer:

The answer from the book is incorrect. Your derivation is correct.

They probably made the same mistake as I did in my other answer, which I now believe is incorrect. The mistake I made is that I ignored the capacitance of the resistor.

I thought it would be easier to see the system as two capacitors with a resistor in between. However it only makes things more complicated. It is thus easier to follow your derivation using Gauss' law. Still, in this answer I will show that also when you consider the system to consist of two capacitors with a resistor in between, the answer you obtain differs from that in the book.

When a voltage is put over a resistor, there is a small surface charge at the interface between the leads and the resistor. This surface charge is given by:

Our total system thus consists two capacitors formed by the gaps between the slab and the plate, one ideal resistor in between them and parallel to this resistor, the capacitance of the slab.

When the total system is charged there will be a charge

At that point the gap capacitances will have a charge of

while the paracitic capacitor has charges.

Note that in reality the surface of the slab acts as a capacitor plate for both the gap capacitance and the paracitic capacitance. The total charge on this surface does not change during the initial charge transfer.

This is the same answer you found using Gauss' law, which in this case is much more simple. The answer in the book is thus incorrect.

The distance of current flow must be within the material containing the electrons you wish to move. You don't get a current without electrons*

I can see your line of reasoning but lets break it down a little and show you where you're going wrong.

The crux of your problem comes from thinking about a free charge between the capacitors (I imagine) a common problem set. In this case you would have electrons to move all along the distance $d$. However in this case your electrons are confined to your solid slab, $S$. Your current can only come from those electrons.

Your equation: $$I_{max} =U_{0}\frac{S}{\rho h}$$ Is describing the current from a volume of electrons with surface area S and depth h.

In case you're unaware of the background your equation is a rearrangement of the standard $V=IR$, with resistivity defined as $\rho = R \frac{A}{l}$ where $A$ is the area perpendicular to current flow and $l$ is the distance it has to flow. Rearranging we get your $I=\frac{V}{R}=V\frac{A}{\rho l}$. Since $l$ is a property of the material within which your electrons are flowing it is fixed to being a length within your slab, ie the distance $h$.

Feel like I may have laboured the point there but hopefully it got across.

*Or other charged particles.

The answer from the book is correct.

You can consider the system to consist of two capacitors (the two gaps between the slab and the plates), with a resistor in between.

When a voltage source is connected both capacitor will be charged, until the sum of the voltages over the capacitors equals the voltage of the source.

When the source is removed and the leads are shorted, we obtain a situation of two charged capacitors in series, placed in series with a resistor. The capacitors will discharge through the resistor.

The initial voltage over the resistor will be the sum of the voltages of the capacitors. This sum will be $U_0$. The initial current will thus be.

Note that the current through both capacitors is the same. Therefore the buildup of charge is identical for both. Therefore,if we start with a neutral system with uncharged capacitors, we will allways have $|q_1| = |q_2| = |Q_1| = |Q_2|$.

I now believe this answer to be incorrect.

Not the answer you're looking for? Browse other questions tagged homework-and-exercises electromagnetism electrostatics electric-circuits capacitance or ask your own question.