Explanation for possible interference on a home mirror?

This is one of the mirrors I used. 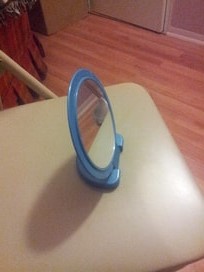 I couldn't take the picture, but the result looked like this image. 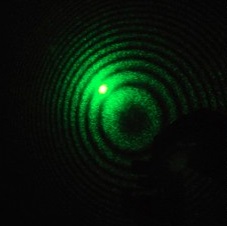 I am wondering if anyone has any idea of what could be taking place here.

In particular, these three points are the things that interest me:

Any ideas to any of the three points would be helpful.

Edit: My initial idea was that this was some sort of thin-film interference phenomena, but the three questions would still need to be explained.

I found two links that actually look like they answer my questions.

Edit 2: The links claim that these rings are an interference pattern coming from dust particles. I found that really hard to believe, so I decided to check this out myself.

I redid my experiment with two cases. For the first case I cleaned my mirror so nothing much was on it. For the second case, I took my vacuum cleaner and dumped whatever particles were left in the vacuum bin.

It turned out that in the first case, only the reflected beam was shown. In the second case, other extra rings appeared on the side and now they were much more visible. This works out exactly as expected according to the links.

This basically takes care of points #1 and #2 (although I haven't understood the derivations in the links yet), but point #3 still leaves me puzzled. I'll have to look into this further and maybe redo this again.

I think the reason why you think the reflected beam is not polarized is because it's so strong your polarizer filter is not strong enough to block it.

Have you tried using two filters at 90 degrees to see if you can stop the reflected beam? That should work regardless of the polarization.

Not the answer you're looking for? Browse other questions tagged optics everyday-life reflection interference home-experiment or ask your own question.

4
How does this trick with mirrors work?
8
Wavefront RMS errors, mirror surface roughness and Gaussian beam scattering
15
Fully destructive interference
2
Observing Two-Beam Interference at Home
11
When light reflects off a mirror, does the wave function collapse?
1
Interference of 2 particular waves in Newton's rings experiment
1
A Question About Thin Film Interference
2
Interference between incident and reflected light rays in thin films