Calculate impact force when time is not mentioned

We can clearly see that there is no mention of time difference.I know that we can calculate Force(F) from change in momentum.

My question is, is there any way to calculate the impact force when time is not present in description. 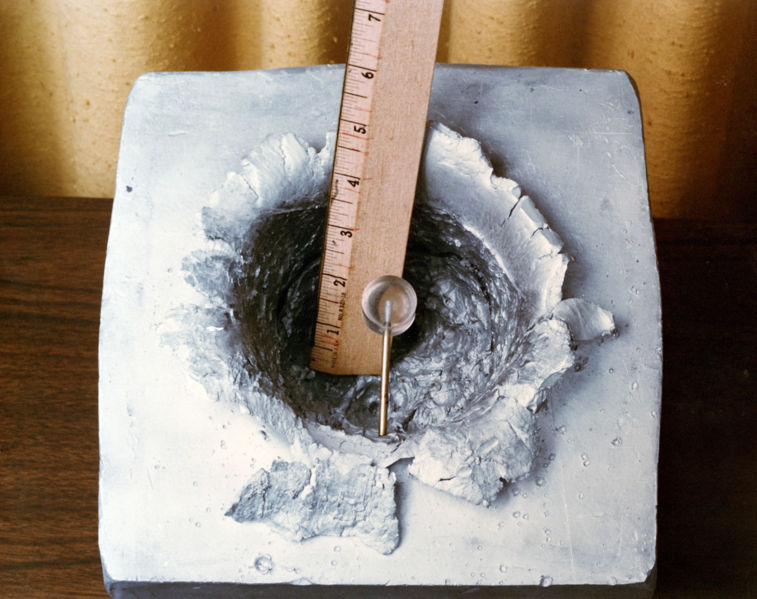 During an impact like this, the force acting is complicated because it varies a lot while the impact is happening. So when you talk about "impact force" you are actually referring to a mean force of the process. A simple way to calculate this mean force consists in making use of kinetic energy and work.

Assuming that we are in the reference frame of the ISS, the object (of mass $m$) is approaching with velocity $v$. Therefore its kinetic energy is given by: $$ E_k=\frac12mv^2 $$

Knowing that the alluminium plate is well fixed to the station, we can immagine that the impacting object won't modify the station's velocity, since its mass is too big with respect to the object's one. This means that all the kinetic energy owned by the object is dissipated during the impact. Energy is dissipated in many ways, through friction or heat for example: we can't really take account of all this effects, but what can do is consider that the object has penetrated the alluminium plate by a distance $h$.

So, if we assume that a constant force $F$ is acting during the impact (that mean force above), we have that the work done by this force is simply: $$ W=Fh $$

From the previous considerations, we know that all the kinetic energy was converted into this work, so it follows that $E_k=W$. Now we have an equation for $F$: $$ F=\frac{mv^2}{2h} $$

I would have thought that a "timeless" problem like this was more naturally an energy problem, but then you can simply divide an energy equation by distance to get a force equation. So I would suggest $\frac{1}2mv^2/s$

Not the answer you're looking for? Browse other questions tagged newtonian-mechanics forces momentum time collision or ask your own question.