What is an extreme deep field image (XDF) and how is it captured?

NASA recently took this Extreme Deep Field image (XDF) that is the area of only small fraction of the dia of moon and contains 5,500 galaxies. Nasa says this was capture by extreme long exposures so it can capture the smallest of galaxies. My question by increasing exposure times how can we know this is the deep space image because a galaxy might be right next to us but really really small and it would only show in these deep space image. Is there any other technology uses to determine this picture really captures galaxies that are 13.2 billion years old. How do we know this is really the deep space? Also can someone through light on some technicalities like the earth is moving and since we are focusing on really really small are, that rotation will cause blurs. If we take extreme long exposure it will make the easily visible stars extremely bright so it will again distort the picture. So my question is what id extreme deep field image and how is it captured over time? 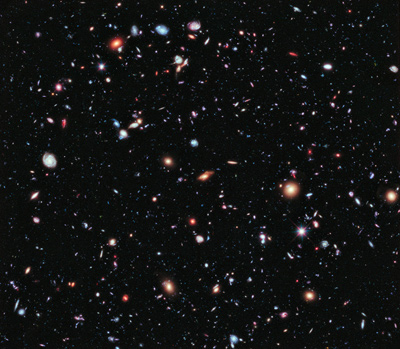 The main problem with seeing very distant objects is that they're very dim. So little light reaches us from them that we have to record data for days and days to make them distinguishable from the background noise. This is what has been done in the XDF.

It's not commonly appreciated just how many galaxies there are in the visible universe. The number of stars in a big galaxy like the Milky Way is a few hundred billion. The exact figure depends on how many really dim stars you count. This is about the same as the number of large galaxies in the observable universe, and if you count small galaxies as well the figure is several trillion. Again the exact figure depends on how many dwarf galaxies you count.

The distant galaxies in the XDF are too faint to measure a precise red shift, but the XDF measures the light over a range of wavelengths so it can get a measure of the galaxy's colour. This gives us an approximate red shift, and from this the distance can be calculated. You might object that galaxies may contain stars of different colours, but the red shifts are much greater than the range of colours within galaxies. In fact we can't see any more distant galaxies because their light has shifted too far into the infra-red for Hubble to see it. The Extremely Extreme Deep Field study will have to wait for the James Webb telescope to be launched.

You ask about focussing and the movement of the Earth, but the Hubble telescope is designed to compensate for this. It can also measure angles to stars with exquisite accuracy, so it's no problem to take pictures from ten years ago and combine them with pictures taken yesterday. Well, I say "no problem", I suspect the Hubble team would say it was a great deal of work! The point is it can be done.

I feel like this answer is a bit unfocussed, but then so was your question. Maybe this will help you refine your question to make it a bit more specific.

The adjective "deep" primarily means "a high resolution". The telescope just focused on a particular small region of the sky and took the sharpest picture it could.

There are no stars (from the Milky Way) in the XDF (or almost no stars, I am not sure) so the objects are bound to be far. In HDF, the "ordinary" Hubble Deep Field, one may find galaxies whose age is about 70% of the age of those in the XDF.

In all cases, the actual age of the objects is determined from the red shift – the multiplicative decrease by the well-known spectral lines. In HDF, they could find galaxies with red shift up to 6. I don't know the exact value for the XDF but it's larger than 6, perhaps up to 10 or so.

Using the Big Bang equations, the red shift may be translated to the distance and the age. (I will assume that the OP doesn't want to discuss conspiracy theories claiming that the huge red shifts mentioned above are due to something else than the cosmological expansion of the Universe.)

Not the answer you're looking for? Browse other questions tagged astronomy space imaging or ask your own question.

2
What are the odds of 2012 DA14 hitting a satellite or the moon?
8
Why do astronomers never put a scale on their photographs?
5
What is the area of the sky that is covered by the Hubble Ultra Deep Field image?
3
What is the average mass of galaxies according to Hubble Deep and Ultra Deep field observations?
1
What is the limit of the deep field exploration?
1
How did the hubble deep field took pictures of far away galaxies?
9
Is the universe a giant telescope?
4
How would a nuclear explosion really operate in outer space?