Why do rotons correspond to the minimum of the dispersion curve? 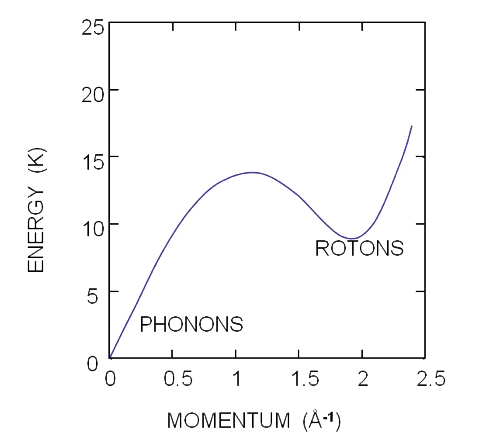 The dispersion curve for superfluid helium-4 is given above. To my knowledge, the first paper that was able to argue that the curve should take this shape from first principles was Feynman's 1954 paper (although I could be wrong).

This curve gives the energy for quasi-particle excitations of given momenta. The smallest energy excitations are phonons, i.e. sound waves. This is understood.

The paper argues that the energy of an excitation is

where $p(\vec r_1 - \vec r_2)$ is the probability per unit volume of finding a helium atom at position $\vec r_2$ given that an atom is present at $\vec r_1$. Therefore, the shape of the dispersion curve is an artifact of the distribution of helium atoms in the superfluid. (Please correct me if anything I said was incorrect.)

Having said that, I don't understand the relation of the minimum of E(k) to "rotons."

We are now pretty confident that rotons are in fact tiny vortex rings in the superfluid. The vorticity of the ring is quantized by the fact that the phase of a wave function is equivalent up to multiples of $2\pi$.

My main question is: What exactly does the minimum of this dispersion curve have to do with tiny vortex rings? Does it have anything to do with the group velocity of the excitation being 0?

Side question: Is there any microscopic picture of what a "maxon" is?

The name "roton" is historical, Landau originally thought that the roton corresponds to a separate branch of the dispersion relation, somehow related to vorticity. He later realized that this is not the case, but the name stuck.

Indeed, Feynman's variational ansatz shows that the roton minimum is continuously connected to the phonon, suggesting that the excitations are not fundamentally different. Note that the minimum arises from a maximum in the static structure function, suggesting that strong correlations between the atoms are important (There is no roton in conventional dilute gas BECs). Indeed, the strong maximum in the structure factor shows that helium is not at all like a dilute gas, but is a dense liquid, on the verge of solidifying. At the liquid-solid transition the short range order encoded in the structure factor becomes the long range order of the solid.

Of course there are vortex rings in liquid helium, and these have been experimentally observed. Indeed, there are papers on the interaction of vortex rings with phonons and rotons.

Not the answer you're looking for? Browse other questions tagged quantum-mechanics superfluidity or ask your own question.

21
What does an orbital mean in atoms with multiple electrons? What do the orbitals of helium look like?
11
Calculating the Berry curvature in case of degenerate levels (Non abelian Berry curvature): issue
2
Ground State of a Helium-like Atom with Electronic Interaction Replaced by Hooke's Law
0
Why is the interaction term in the helium Hamiltonian counted once?
6
Wavefunction vs Quantum Field (Conceptual Approach)
3
How do we imagine the transition between phonons and rotons?
1
Can you calculate the static lattice/potential energy given a phonon dispersion curve?
2
Symmetrisation of (fermionic) two-particle system without vs. with spin in wave function
10
Why do eigenvalues correspond to observable quantities?