Some doubts about Field Lines [duplicate]

Ask Question
Asked 3 years ago
Active 3 years ago
Viewed 114 times
-2
$\begingroup$
This question already has answers here:
Why does the density of electric field lines make sense, if there is a field line through every point? (6 answers)
Closed 3 years ago.

Take electric field lines as example. In EM textbooks it is stated that

My understanding is that field lines are not rigorous mathematically. So I doubt whether the above can always be true.

For instance, if we draw field lines according to rules 1 and 2, will it happen sometimes that you need to create new field lines or annihilate field lines artificially so that rule 2 is satisfied?

To kick things off: this

field lines are not rigorous mathematically

is just plain wrong. It is perfectly easy to come up with a mathematically rigorous definition of a field line: it is a curve $\mathbf c:(a,b)\to\mathbb R^3$ such that $$ \frac{\mathrm d\mathbf c}{\mathrm ds} = v(s) \mathbf E(\mathbf c(s)), $$ i.e. such that its derivative $\mathbf c'(s)$ is proportional to the electric field at $\mathbf c(s)$. (The factor of $v(s)$ is there to allow for unit-norm $\mathbf c'(s)$ if so desired.) There is nothing more, and nothing less, to the definition of field lines. It can happen that there are points at which field lines cannot be continued (including e.g. point charges), but that's really all in the game; if $\mathbf E(\mathbf r)$ is regular, then this cannot happen.

OK, so, that settles point 1. Point 2 is harder to deal with, and the answer depends on the configuration; more specifically, on whether the field is being examined in vacuum or in a region with nonzero charge. I've gone over much of this in my answer to Why does the density of electric field lines make sense, if there is a field line through every point?, but the short of it is that the density of field lines takes all of its validity from Gauss's law, $$ \nabla\cdot \mathbf{E}=\frac1{\epsilon_0}\rho,\ \text{or equivalently}\ \oint_{\partial\Omega}\mathbf{E}\cdot\text d\mathbf{S}=\frac1{\epsilon_0}Q_\Omega, $$ as well as the concept of a flux tube: a tube-like surface made up of two end-caps $S_1$ and $S_2$, such that all the field lines that start at $\partial S_2$ end at $\partial S_1$, and their union forms the rest of the tube (which is then parallel to the field lines at every point). 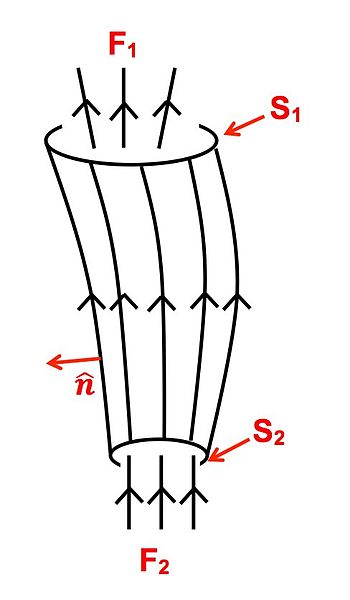 That last equation is the crucial bit: if you draw five streamlines going through $S_2$, then those five streamlines need to go through $S_1$, and that means that if $S_1$ is bigger than $S_2$ then the density of field lines has gone down ─ but so has the field! The flux (like the number of streamlines) is conserved, and if the surface increases, then the field strength needs to go down as well, in exactly the same proportion as the density of field lines.

That brings me, then, to your other key point,

will it happen sometimes that you need to create new field lines or annihilate field lines artificially so that rule 2 is satisfied?

to which the answer is not in a vaccuum, but yes if there are nonzero charges.

So, why don't we talk about that formalization much? Frankly, because it's not very useful. Streamline plots are useful qualitative aids in both situations, but if you want to use them in earnest for a quantitative or semi-quantitative analysis, then that's only really going to work in the divergenceless case. And, in any case, streamline views of electric fields are extremely limited since they handle superpositions of field very poorly, and in most situations you're better off seeing electric fields as vector fields rather than as collections of streamlines, which is the core place where the lack of focus comes from.

Not the answer you're looking for? Browse other questions tagged electrostatics electric-fields gauss-law vector-fields or ask your own question.

33
Why does the density of electric field lines make sense, if there is a field line through every point?