Spin of a neutral pion

I was going through the book High Energy Physics by DH Perkins. In the decay $\pi^{0}\rightarrow 2\gamma \ (photon)$, the possible spin components of the system of photons $S_z$ can be $0$ or $2$.

Since it decays to two photons, in the center of mass the photons will be back to back from conservation of momentum, i.e. zero rotational angular momentum. From the two allowed additions of the spin orientation of the collinear opposite momentum photons, one has to chose 0.

I have the 1982 edition, and it goes on to exclude an angular momentum between the two photons ( which I consider self evident by collinearity and the point particle definition of the standard model). 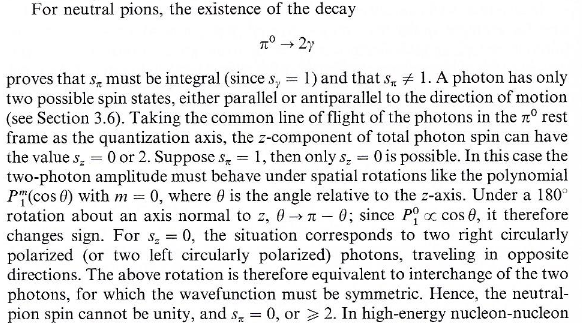 The argument explores the possibility that there exists an angular momentum in addition to the spin of the two photons and excludes it, thus the spin 1 of pi0 has to be 0 or or equal/larger than 2. i.e it excludes spin 1.

Not the answer you're looking for? Browse other questions tagged particle-physics quantum-spin bosons or ask your own question.