I'm trying to comprehend the discussion here about the internal energy of an ideal gas being only dependant to its temperature $dU=nc_vdT$. I have the feeling that there are some assumptions missing.

What I see from the proofs, for example here, is that they assume they can substitute any thermodynamic process with other incremental processes as far as the consequent process has the same start-end. To understand better what I'm talking about you may consider the conservatives forces where the total work done by the force is independent from the path. 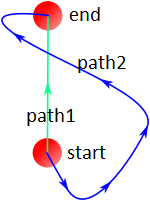 So my question is that if all thermodynamic process with the same start-end are homeomorphic? meaning that this is an intrinsic feature of a thermodynamic system. Or there are certain assumptions to be met? for example has reversibility anything to do here?

A few points that may help…

Not the answer you're looking for? Browse other questions tagged thermodynamics conservative-field or ask your own question.

2
Governing equations and boundary conditions for a steady-state compressible viscous flow in an axisymmetric annular orifice
1
Internal energy of an ideal gas?