How can we determine stable and unstable equilibrium points from a potential energy versus displacement graph? 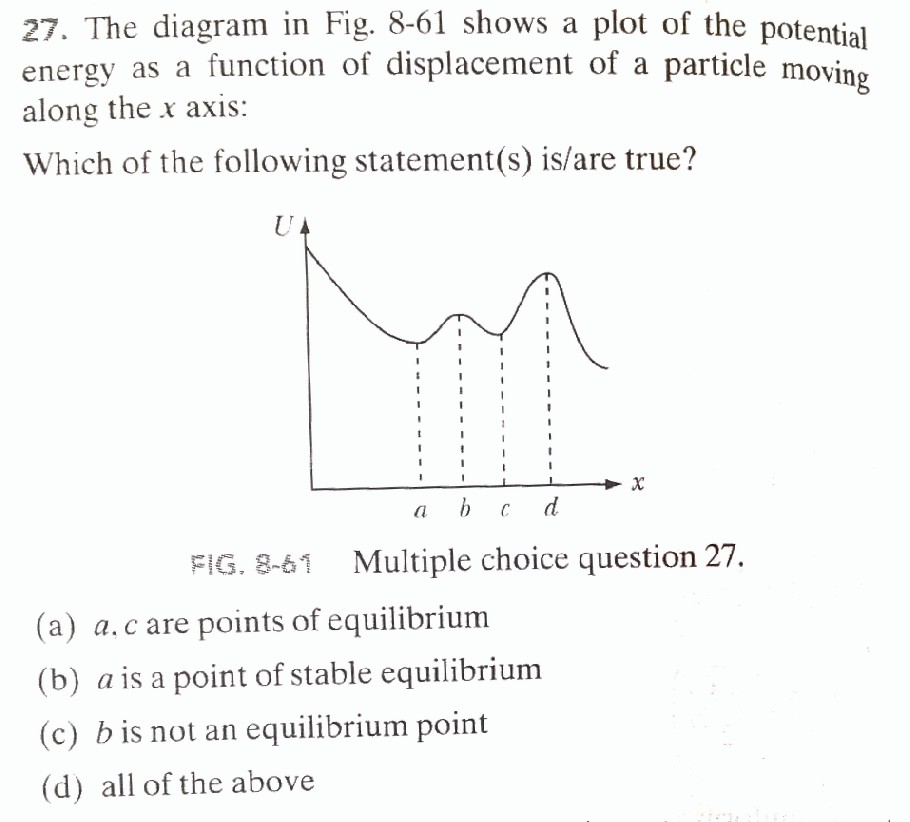 In this question, how can we comment on the position of stable/unstable equilibrium if we don't know the total energy of the system? We know force is zero at points 'a', 'b', 'c' and 'd' but there might be some kinetic energy at those points. Moreover, the answer given in the book is (d). But how can (c) be true?

Static equilibrium means that if you place an object at rest in that position then it will stay there. The kinetic energy of the particle is zero because it is at rest.

Option (c) is false. Points b and d are positions of unstable equilibrium. The book answer is incorrect.

Place a marple on a hill top and another in a valley crest. Which of these positions is stable? The marples can lie still at both, so they are at equilibrium at both positions. But which would we call a "stable" equilibrium? The valley, of course. Because at the slightest offsetting from the exact top-point it will roll away - so we call it unstable - while at the slightest offsetting from the exact bottom-point it will roll back - so we call it stable.

In general, objects want to move the way that decreases the potential energy (that's why objects fall down, if they have the chance, and not up).

Therefore, option c) is false. Point b is definitely a point of equilibrium, just an unstable equilibrium. If the text book says that c) is a right answer, then that must be a mistake.

The same will work when $H$ is not the total energy but is nevertheless conserved. Examples include beads on rotating hoops of various shapes. In these cases, $\sum_i \dot q_i p_i \ne 2T$ typically, and it is difficult to isolate a "potential", but one can sometimes identify an "effective" potential and proceed as before.

I'll try to focus on your concrete questions.

That's the only thing you need to know. Whatever the Energy is, it will ALWAYS be above the minimum of the curve you show. Does it matter the concrete value? Nothing changes if it is 2 or 2.1. This is a qualitative analysis.

So you can just think of Total Energy as an horizontal straight line (because it is the same along all positions), a horizontal line which lies above the curve's absolute minimum.

You only have yo suppose that it is "above enough", and that's all. The particle will be preferably moving around minima. If the energy goes down (due to friction or whatever), the particle will get confined around the minimum in which it was in the moment of the energy lowering. The movement will then be restricted to that area.

However, the other minima are still equilibrium points, they're just forbidden, but they will become allowed agian as soon as the energy rises again due to an external action.

And yes, point b is an equilibrium point too, it's just unstable.

Before moving on to your question - How can we use potential energy curve to find stable/unstable equilibrium points?, let's understand what is meant by stable, unstable and neutral equilibria.

The following illustration shows the three types of equilibria discussed above:

Determining whether an equilibrium point in a potential energy versus displacement graph is similar to the illustration above. Let's consider the following plot: 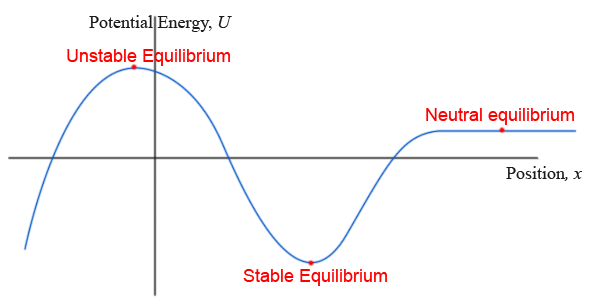 The points of equilibrium are where the slope is zero. Imagine the above plot to be a hill and in your mind place a ball at each of these points. Now, try to think what happens if you give it a slight push? Will the ball roll back towards the equilibrium or move away and doesn't come back to the initial point? Or does it happily stay at a position even after being slightly displaced? When you try answering these questions while keeping the general case of stable, unstable and neutral equilibrium, you can easily figure this out!

If you had any issues in understanding facts mentioned in this answer, I'd recommend you to read this post from Physics LibreTexts - Force and Potential Energy (pdf).

Not the answer you're looking for? Browse other questions tagged homework-and-exercises newtonian-mechanics potential-energy equilibrium stability or ask your own question.

7
What is the state of the equilibrium for a second derivative equal to zero?
2
Situation of Stable, Neutral and Unstable Equilibrium