What difference does Moment of Inertia cause?

Okay, let's assume that we have an incline which is at say, an angle $\theta$, not too big.

Now, we have a a bunch of different objects with all the same radius and the same mass. Let's say that the objects are a sphere, hoop, shell, and disk, so clearly the moment of inertias are different.

In addition, the incline is so rough i.e. $\mu$ is so big that all the objects will roll down the incline without slipping.

If the force acting on the objects if always $$\Sigma F_{net} = mg\sin\theta - mg\cos\theta\mu = ma$$ by Newton's Second Law, wouldn't the acceleration be the same in all cases?

I know there's something wrong with my reasoning, but I can't figure out what. Any help would be greatly appreciated.

The reason my reasoning is wrong is because friction is not always $mg\cos\theta\mu$ but instead this expression is for the maximum possible value of friction, which is not what the friction in the force equation is supposed to represent. Thanks to everybody for helping me understand this :)

the remaining calculations are this:- 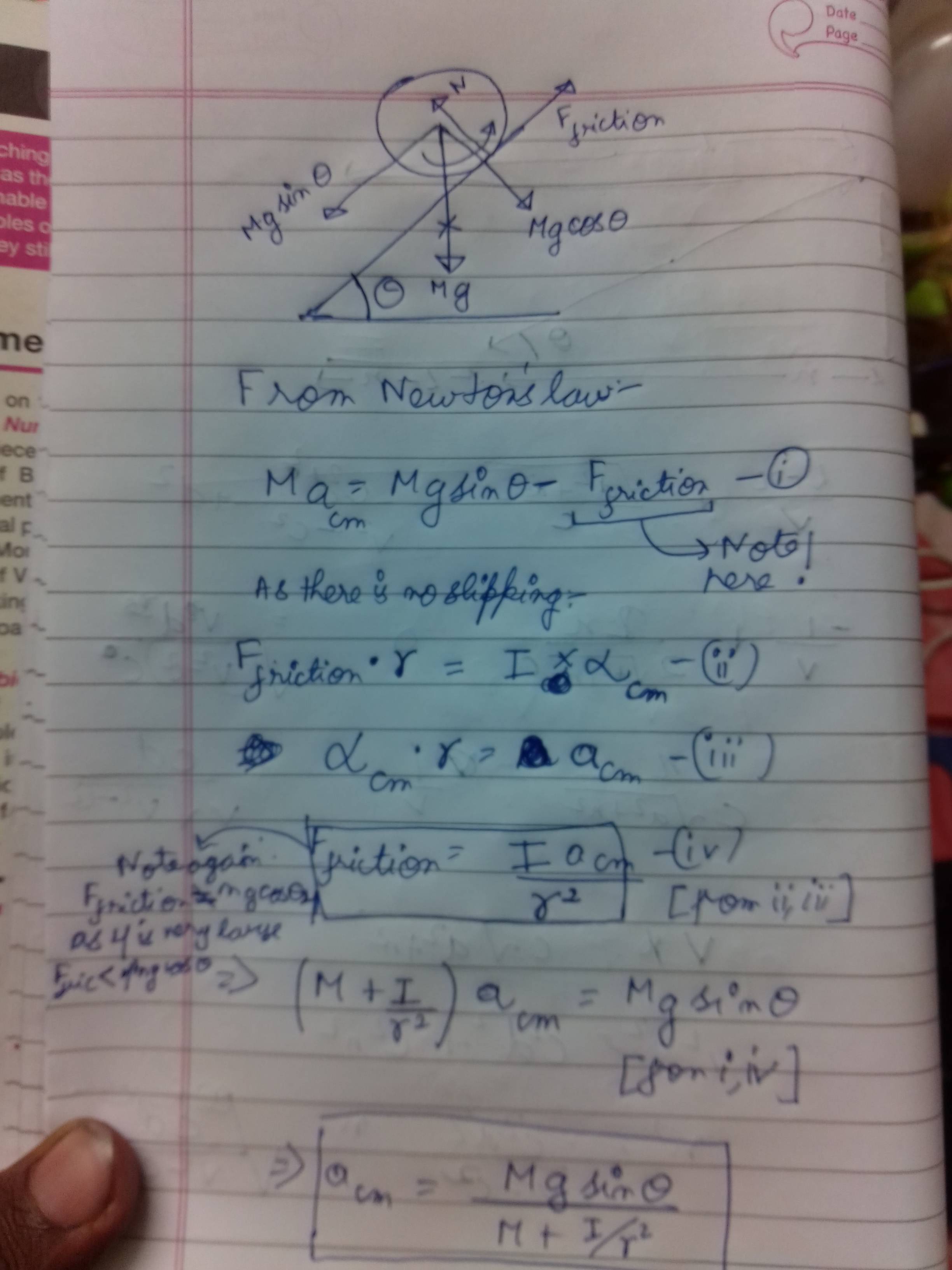 The problem you are having is that those so called "laws" are only for linear motions, and if you apply them to this particular case you will see that (as I have written as comment)

By following your argument, if the friction is so big that the objects are not slipping, when you calculate $F⃗_{net}$ you will see that they should also not accelerate at all because the net force acting on them is $0$.

and this does not result in any contradiction, it just tells us that the objects are not going to any linear motion.

And if you apply them to this case, you will again see that the objects has to move by rotating.

I'm little confused since the title and the main body of your question does not match, so I'm going to answer to the title also.

Moment of inertia in rotational motion is equivalent to the mass in linear motion, i.e given a torque/force both resist to the change in angular/linear velocity (i.e angular/linear acceleration).

In particular, since all the object in your example have the same mass (and for a fixed origin) if we assume that the torque acting on the object are the same, then the bigger moment of inertia is, the less the angular acceleration of the object will be.

Not the answer you're looking for? Browse other questions tagged newtonian-mechanics forces rotational-dynamics friction moment-of-inertia or ask your own question.

4
Conceptual rolling
1
Finding the frictional coefficient
2
What is the exact role of friction in rolling without slipping?
2
Free fall vs falling on incline of rotating bodies