Measurements in the phase space picture of quantum mechanics

In the Heisenberg picture, observables are described by self adjoint operators, that act on a Hilbert space. Given a state and an observable, a measurement is modeled in such a way, that all eigenvalues of that operator are the possible outcomes.

Now both descriptions are exactly equivalent via the Weil-Wigner transformation. That is there is a priori no reason to favor one over the other.

My question is: How is measurement and measurement outcome modeled in the $\star$-product phase space description of QM?

Conceptually, little has changed for 20 years to moot this outstanding Physics Today article on the subject.

Typically, in the iconic double-slit interference experiment, wave patterns on a screen are observed and measured, and compared with QM predictions, typically expectation values in position space. Through the strength of mathematical theorem, the predictions of Hilbert-space, or phases-space QM are identical, inevitably.

In phase-space quantization, one does the momentum integral to produce a space probability distribution, identically to that produced in Hilbert space, and the related expectation values derived in standard texts. They are always consistent with the uncertainty principle, at the heart of QM. This principle is straightforward to derive through commutator-based inequalities and the positivity of the norm in the Hilbert space formulation; and through even more intriguing $\star$-product inequalities and subtler mathematical features in the phase-space formulation. (That product was discovered by H Groenewold in 1946---Moyal does not appear to have known about it at the time.)

Edit to address comment . A discontinuous change in the wave function following measurement, is translatable, mutatis mutandis , as a discontinuous collapse/change in the Wigner Function, the celebrated Wigner transform of the density matrix. So, an enhanced "localization" of the wave function corresponds to a "squeezing" of the Wigner function. This Wigner function corresponds to the quasi-probability measure in phase space and is interconvertible to wave functions. It evolves "analogously" to wave functions through the Moyal equation--the analog of the von Neumann equation in Hilbert space. Here is its double-slit profile before travel to the screen and collapse, 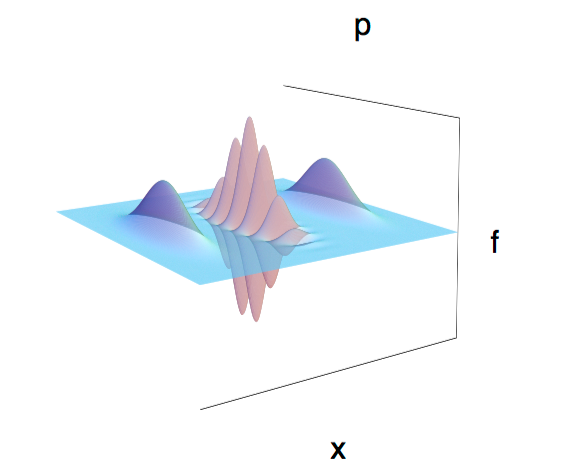 So, nothing in the measurement process would present any differently in this formulation.

Not the answer you're looking for? Browse other questions tagged quantum-mechanics measurement-problem phase-space wigner-transform deformation-quantization or ask your own question.