Why in an ideal gas as the volume increases, both the pressure and the temperature drop?

I was reading Fundamentals of Physics(Halliday, 10th ed.), chapter 19, when I saw a statement "Figure 19-15a shows our usual insulated cylinder, now containing an ideal gas and resting on an insulating stand. By removing mass from the piston, we can allow the gas to expand adiabatically. As the volume increases, both the pressure and the temperature drop." 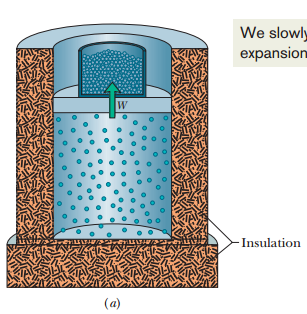 The first law of thermodynamic states that the change in internal energy of a system $\Delta U$ is equal to the heat input to the system $Q$ minus the work done by the system $W$.

You have the same number of molecules moving slower than before in a container which has a larger surface area thus the pressure is lower.

In a adiabatic process, there is no energy supplied to the system. So, when the gas expands adiabatically it is doing work, and the energy to do work can only come from it's internal energy which is why the temperature decreases.

A microscopic explanation may also be useful: when molecules are bouncing against the receding piston, the speed with which they bounce back will be lower. This means lower kinetic energy, a lower temperature.

The Combined Gas Law which is a combination of three other gas laws, states that

"The ratio between the pressure-volume product and the temperature of a system remains constant." (Wikipedia).

It is expressed mathematically as ${PV\over T} = k, \qquad\tag 1$ where $P$, $V$, $T$ and $k$ are the pressure, volume, temperature and a constant (with units of energy divided by temperature) for the particular body of the gas.

In your question, the process is adiabatic (no energy or mass transfer), so as volume increases to $V_2$, pressure will drop to $P_2$ in inverse proportion (amount of gas is constant) according to a sub-law of the Combined Gas Law called Boyle's Law, and the temperature drops to $T_2$, which we can be calculated using another sub law (Gay-Lussac's Law). This is an example of adiabatic cooling.

Not the answer you're looking for? Browse other questions tagged thermodynamics ideal-gas gas or ask your own question.