So I made a variation of this experiment, your answers to which, I hope would clarify some things about STR (for me at least). 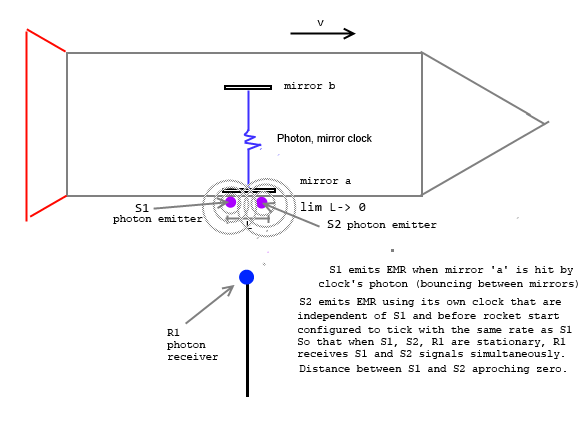 The rocket with two photon emitters S1, S2 is moving at constant speed V (close to light speed) relative to R1 photon receiver which we will consider "stationary". Outside the rocket the only source of EMR are S1, S2 photon emitters.

The difficult thing to overcome when first approaching special relativity is the idea of a "True" time.

You won't have a difference between when the S1 and S2 emit light because, to an observer on the ship moving at a constant velocity, they are both clocks measuring the same thing. To an observer at R1 the signals from S1 and S2 will also be identical, neither will agree with a clock that was in R1's frame of reference.

It gets confusing when comparing light clocks to mechanical clocks, etc. I hope this helps.

As you see above, Jack is at rest, meaning he has neither accelerated no decelerated, and thus has not changed his frame of reference. Jack uses 2 synchronized clocks to measure how much slower Jill's clock is ticking. The results are also noted above.

Jill takes off to the left, stops, and then accelerates to the same speed previously noted, and heads back to pass by Jack. From Jill's perspective, both her clocks still seem to be synchronized. However, from Jack's perspective, he sees that Jill's rear clock is ahead of the one at the front.

Now if Jill uses her two clocks to measure how fast one of Jack's clocks is ticking, the clock time offset between her two clocks will in turn have her measurements indicate that Jack's clock is ticking slower than her clocks, and do so even though Jack has not altered his frame of reference.

With this being the case, dozens of rockets that are identical to Jill's rocket, could have left jack and then returned and passed by him, but all do so at different speeds. They all, when measuring one of Jack's clocks, would in turn get different results. But there is only one Jack, not multiple Jack's.

I am not sure I have understood you well, but in SR an observer does not look at the moving clock (light clock) from side. Since you call it "unrealistic" I'd try to shed some light:

In special relativity an observer is not a single person or human being, who sits on a bench and observes moving clocks. Stationary observer is the whole reference frame, or the team of observers. These observers stay apart from each other at certain distance and each has a clock. These clocks have been previously synchronized by Einstein signalling method (there is also Reichenbah's, which is self - consistent). They record space and time coordinates of events in immediate vicinity, or straight in front of each of them.

Then this observer sends a beam of light from clock $C_1$ towards clock $C_2$ when clock $C_1$ shows 0. He assumes, that one - way speed of light is c (Einstein synchrony convention). Since he knows distance and speed of light, he synchronizes these clocks, so as they show the same time in reference frame $S$.

The animation below depicts light clocks.

Sure, from the point of view of "stationary" observer $S$ beam of light moves by hypotenuse, though in "moving" frame $S'$ beam of light jumps up and down.

25
Time dilation clock experiment: what would happen if the clock were flipped 90 degrees?