I realize that there is a lot of topic's mentioning this, but I think my question is rather new compared to many of them.

First of all, this is part of a school assignment, and our object is to replicate Young's double slit experiment. I am familiar that the original experiment isnt a double slit, but to get familiar with the basics, I will start with the double slit.

My project requires me to find a lot of information, so if anyone knows a good source of finding information in the subject, please let me know.

A double slit arrangement with each of the widths of the slits being very, very small produces this interference pattern.
It is a graph of relative intensity (y-axis) against position (x-axis).

A single slit of finite width produces a diffraction pattern.

Now if you have a double slit arrangement with slits of the width that produced the diffraction pattern above you get the following interference pattern.

You will note that the single slit diffraction pattern controlled by the width of the slits modulates the intensity of the double slit interference pattern.

Here is the sort of pattern that you might observe on a screen: 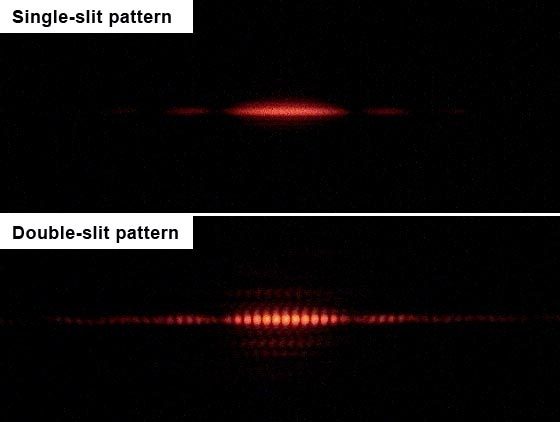 Now if the slit width is halved then the diffraction pattern due to a single slit of that width looks like this.

Using two slits of this width whilst keeping the slit separation (centre to centre) the same as before results in this interference pattern.

So the very first diagram is an interference pattern with two slits which are very narrow and hence produce a very broad diffraction pattern.

The third graph was produced using

The first term is the diffraction envelope and the second term the interference fringes.

There is more about how the angle $\alpha$ is related to the wavelength of the light, the slit width and the slit separation in this answer and in many textbooks and websites.

4
Intensity of subsidary maxima in a diffraction grating pattern?
1
Double Slit vs Diffraction Grating Intensity Graph
0
Actual double slit
0
Intensity graph for laser double-slit experiment?
0
Why does the fringe pattern of an interference pattern get darker as the anti-nodal lines increase?
0
How one explains the formation of this type of fringe pattern of double slit experiement with wavelength comparable to width?
0
In the Young's Double Split Experiment, how does the intensity of fringes vary with distance?
0
Why does intensity decrease from the centre fringe in slit experiments?
1
Question on Double slit diffraction
-1
Young double slit experiment
See more linked questions