Why is the solar noon time different every day?

If you check the local time for solar noon is different every day. Why is it so? Is it because Earth doesn't make a complete rotation in exactly 24 hours?

The following is an example of the solar noon differences (also sunrise and sunset), computed by the Python Astral module for the city of Guayaquil 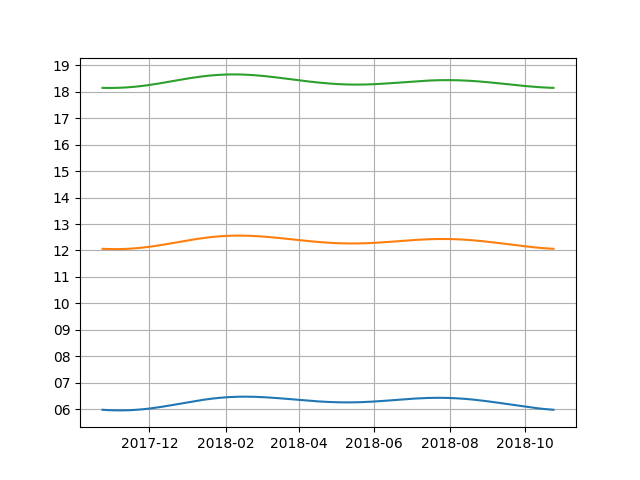 Here's how I explain this to my students. There are actually two suns in the sky. One is responsible for causing objects to cast shadows and is the daytime star we're all accustomed to observing. Let's call it the "true Sun" or the "apparent Sun." It, in effect, governs our lives. However, it has one main problem relevant to timekeeping, and that is that its speed along the ecliptic throughout the year varies. It's average (angular) speed is about $360/365$ deg/day or about $0.986$ deg/day. Now, this variation is important because if we want to use this Sun as a prime mover for timekeeping, we have to be aware of the variation. It means that an hour, which is defined as one twenty-fourth of the time it takes this Sun to go from the celestial meridian around to the celestial meridian again, varies in duration throughout the year when compared to the same interval measured with a timekeeping device that does NOT vary in rate. As for the cause of the variation, there are several factors at work here. One is the shape of Earth's orbit, which causes Earth to move at different speeds at different places in its orbit. Of course, we see this as differences in true Sun's speed along the ecliptic because we're on the moving Earth. Another is the fact that true Sun's path, the ecliptic, makes a $23.5^\circ$ angle with the celestial equator, which also causes seasonal variations in true Sun's speed along the celestial equator.

To get around these problems, astronomers invented the "mean Sun" for timekeeping, and it moves at a uniform rate (not a variable rate) along the celestial equator (not the ecliptic). Both it and the true Sun have the same average angular speed, taking one year to complete one trip around the sky (in different planes, however). Being fictitious, one can't actually observe mean Sun. Nevertheless, mean Sun is the prime mover that we use for all civil timekeeping. We can track its motion relative to the celestial meridian with a mechanical (or nowadays, digital) device called a "clock."

Now, the variations in the true Sun's motion causes it to sometimes be ahead of, sometimes lag behind, and sometimes be neck and neck with the mean Sun. This variation is called the equation of time and can be tabulated for any date.

When we say "noon" most people think of Sun being at its highest point in the sky, which need not be the zenith, but will ALWAYS be somewhere on the celestial meridian (yes, things get weird in the arctic and antarctic regions). However, "noon" really only applies to true Sun's motions. We keep time by mean Sun's motions, and a mean solar clock ALWAYS reads 12:00 when mean Sun is on the meridian. This moment, except for four days of the year, does not coincide with "noon" as embodied by true Sun's motions.

This is discussed in some detail in http://www.sundials.co.uk/equation.htm and the links therein.

The main cause is that the length of a day changes during the year. For example the Earth moves faster relative to the Sun at perihelion than it does at aphelion. This means the perion from noon to noon measured by a sundial is not the same as the period measured using one of the standard time schemes like universal time. The other significant cause of changes in tne day length is the the tilting of the Earth's orbit.

the answer is much simpler - the earth's orbit is an ellipse, not a circle . . so it is traveling faster when closer to the sun (january) and slower when farthest from the sun (july). The time from solar noon to solar noon is a sidereal day (23h56m, fixed to the stars) PLUS the time it takes to "compensate" for how far it has moved in its orbit. This is about 4 minutes, but it is a bit MORE when the earth is moving fast (january) and a bit LESS when the earth is moving slowly - thus the time from solar noon is a bit longer than 24 hours in january, and a bit shorter in july. This is why the solar noon time "wobbles" throughout the year.

A solar noon is defined when the Sun is at the zenith (directly above). Since the Earth revolves round the Sun, the point that is directly above would have changed because Earth is in a different point from the previous noon.

Solar noon becomes earlier and then back again more than once a year; it moves 18 minutes earlier from about Feb. 10th until May, then 12 minutes later by July , then back 23 minutes earlier by late October/early November, then forwards again by half an hour by Feb tenth. So the biggest change in Solar noon occurs between early November and mid February by 31 minutes. I hope that has answered questions, but it is also a question, because I don't know why direction of solar noon time changes 4 times a year; two per direction, and also why the largest difference is in between early November and mid February. If anybody can answer that I'd appreciate it. Also, what are the 4 days user 11266 is referring to the end of his answer?

6
Is there a simple yet accurate formula for where on Earth the Sun and Moon are directly overhead?
14
What accounts for the discrepancies in my calculations of year lengths?
7
What time scale is used by the JPL HORIZONS system?
5
Ephemeris calculations: Light time correction of the moon
1
Current length of the solar day?
1
Rotation rate of Mercury vs. a day on Mercury
3
Right Ascension for epoch 2000 - physical location?
16
Is Earth’s rotation slowing down or speeding up?
1
Why the solar term gaps differ up to 1 day?