Before us are two half-integer-spin particles. Their spin directions are parallel, aligned with the line connecting their locations. They are indistinguishable but for the fact we have affixed the label "A" to the one on the left and "B" to the one on the right. Both spins point to the right.

Now we wish to exchange the positions of the two particles and to do so we urge the two particles together along that line. But when they are close enough for their wave functions to start to overlap, the exchange force mechanism kicks in and the particles push back; they refuse to "pass through each other" as integer-spin particles would in this circumstance.

So we take particle B and reverse the direction of its spin vector so it points to the left, and is hence antiparallel to the spin of particle A, and then we urge the two particles together once more.

What will be the outcome in this case?

If you reversed the directions of the two spins, the spin part of the wavefunction is a singlet and it is anti-symmetric.

The total wavefunction (spatial * spin) needs to be overall antisymmetric for fermions, which means in your case the spatial part of the wavefunction is symmetric - there is the highest probability of finding the particles at the same position!

The Pauli exclusion principle states that no two fermions can be in the same quantum state.
In an atom, this means that no two electrons can share the same set of quantum numbers.

Let's take two electrons in a bound electronic state, be it the $H^-$ ion, as in the hydrogen atom with two electrons.
I am choosing this so that I can use the hydrogenic wavefunction for both electrons:

where the first part is the spatial and the second part the spin part of the wavefunction. This is assuming that spin and space don't talk to each other, so I can split the wavefunction, but it is not always true.
You can find a list of tabulated hydrogenic wavefunctions $|\psi_{n,\ell,m_\ell} (\mathbf{r})\rangle$ online.

If I have two electrons, the total wavefunction of the system will be:

This is where I need to introduce quantum statistics: electrons are indistinguishable particles. They are only characterised by their intrinsic properties such as mass, charge, spin, lepton number etc. but there is nothing that marks any one electron apart from another. It's like you have two identical twins, Bob and Brian. Bob has glasses. But as soon as you put glasses on Brian, they become once again indistinguishable. Same with removing the glasses. *

So I have to encode the fact that the electrons that I have above labelled as $1$ and $2$ could actually also $2$ and $1$ without changing the resulting physics in the slightest.

To do this, I create a linear superposition:

where the minus sign is there to ensure that fermions have an antisymmetric total wavefunction - i.e. they get an overall minus sign to the original wavefunction when you swap them $1\leftrightarrow 2$. The physical origin of this is quantum statistics.

Using the expression for $|\Psi(r)\rangle$ above, and letting the $1$ electron have an unprimed set of quantum numbers, and $2$ a primed, we have:

What happens if the two electrons occupy the same quantum state? I.e. same energy, angular momentum etc.? Then they would share the same set of quantum numbers. And $|\Phi \rangle = 0$, i.e. there would not be a system existing in such a state.

But all it suffices to prevent the difference from going to $0$ is at least one quantum number differing.
Electrons have spin quantum number $s = 1/2$, so $m_s = \pm 1/2$. If the two electrons have opposite spin, one is in $m_s = 1/2$ and the other is in $m_s = -1/2$, different quantum states, hence they are allowed to live wherever you want - only limited by the particular form of the spatial wavefunction.

A less rigourous argument just states that the total wavefunction $|\Psi\rangle$ for two particles is a function of both labels:

but if they are fermions, there needs to be antisymmetry upon exchange of labels:

and if you insist that your $|\Psi\rangle$ is the same before and after particle exchange, i.e. that they have the same set of quantum numbers, then you have $f = 0$.

To make your life easier, you can combine angular momenta so as to re-write $|\Psi\rangle$ from before into:

The spin part is obtained from adding the two spins:

You see that this spin part is anti-symmetric, which means that the spatial part will need to be symmetric in order to maintain an overall antisymmetry of the wavefunction.

If both electrons are in the same spatial state, because, for example, you are considering the ground state, then the spatial part of the wavefunction has to be symmetric. Since $\psi'$ and $\psi$, only marked by their quantum numbers, are the same. The ground state would just be $\psi_1 \cdot \psi_2$.
This is symmetric under exchange, which means the spin part has to be anti-symmetric, i.e. a singlet, i.e. the two spins have to be antiparallel.
Which is the foundation of Hund's rule and to how we fill atomic shells in the periodic table - max two spins per state, one $\uparrow$ and one $\downarrow$.

Another cute way of actually seeing the Pauli exclusion principle is to actually plot a symmetric and anti-symmetric combination of the wavefunctions.

As I said before, if both electrons were in the same spatial state, we could only build a symmetric combination. To see both cases we need to go to the case of one ground and one excited. 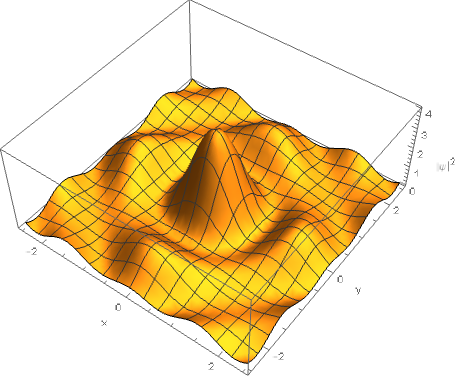 There is a maximum where $x=y$, i.e. where the "particles" (excitations of the infinite well) occupy the same position. 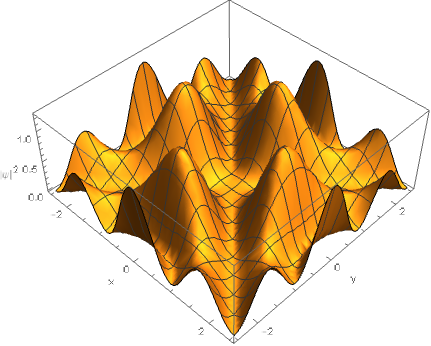 There is a no probablity of finding the particles at $x=y$, i.e. where the "particles" (excitations of the infinite well) occupy the same position.

if the spins are antiparallel, then the two fermions CAN occupy the same position if we wish them to

Yes. In a Helium atom, both electrons are described by the same wavefunction. This looks exactly the same (spatially) for both, which means they are occupying the same position. "Occupying" means that the wavefunctions perfectly overlap, since electrons are not point particles in quantum unless measured.

This can only work if their 2 spins are antiparallel. If you had a third electron, e.g. $He^-$ or $Li$, it would need to go to the next energy level (the next shell), which has a different $n$ and hence a different spatial wavefuntion $\psi_n$.

* : You could distinguish Bob from Brian if you know where they are seated, for example. This is why atoms in solids are distinguishable, because bonds make them localised - this acts like a label.

Free electrons never occupy the same location. Where one electron is, a second can't be. (BTW this is the reason we can’t find out more about the inner structure of the electron and it’s size. We tried to interact with electrons by the help of electrons in Rutherford’s gold foil experiments and have to understand that the electrons are sweeping simply away from the incoming electron beam.)

What we deduce in atomic shells is from Mendeleevs and Meyers periodic table. Coming from Bohrs orbiting electrons now we are talking about probalistic shapes in which the electrons still mobile. The spherical harmonicsin Cartesian coordinates gave half sphere and lobe shapes and it was stated that electron pairs are located in these shapes and are moving from one to the over half.

That is if we follow Diracs and Schrödingers relativistic wave equations. It would be a great thing to get equations where the electrons shapes are not going through the nucleus and each electron occupy the half sphere or lobe only.

So we take particle B and reverse the direction of its spin vector so it points to the left, and is hence antiparallel to the spin of particle A, and then we urge the two particles together once more.

What will be the outcome in this case?

For free electrons the question is meaningless because their electric charges do not allow them to get in magnetic or other interactions.

Not the answer you're looking for? Browse other questions tagged quantum-spin exchange-interaction or ask your own question.

3
Can two electrons have the same momentum and spin directions?
1
Quantum Spin intrinsic once inside a magnetic field

1
Does spin alone have any effect on the physical interactions of particles?
0
Why can't a spin-1 particle decay into two identical spin-0 particles?
0
Spin-½ and beyond: Measuring spin components other than ± ħ / 2: How to formulate the probability function?
0
Precise definition of exchange
0
Spin of 2 oppositely charged fused point charges
1
Spin and many particle systems
3
Spin of two identical particles
0
Why does spin determine particle statistics?