Where does the energy used to rotate the axis of a flywheel orthogonally go?

I have a wheel spinning away from me in the vertical plane. The angular momentum is pointing to the left. The axis of rotation is horizontal, and it is supported on either side by a bearing and the whole mount is on a turntable constrained to rotate about the Z-axis. Think of a free spinning bike wheel. It requires force to rotate the assembly due to the gyroscopic action of the flywheel but lets say I rotate it 360 degrees so that the direction of the angular momentum is brought back to where it was initially. Now, a force has been applied through an entire 360 degrees of rotation, reversing the direction of the wheels angular momentum twice. 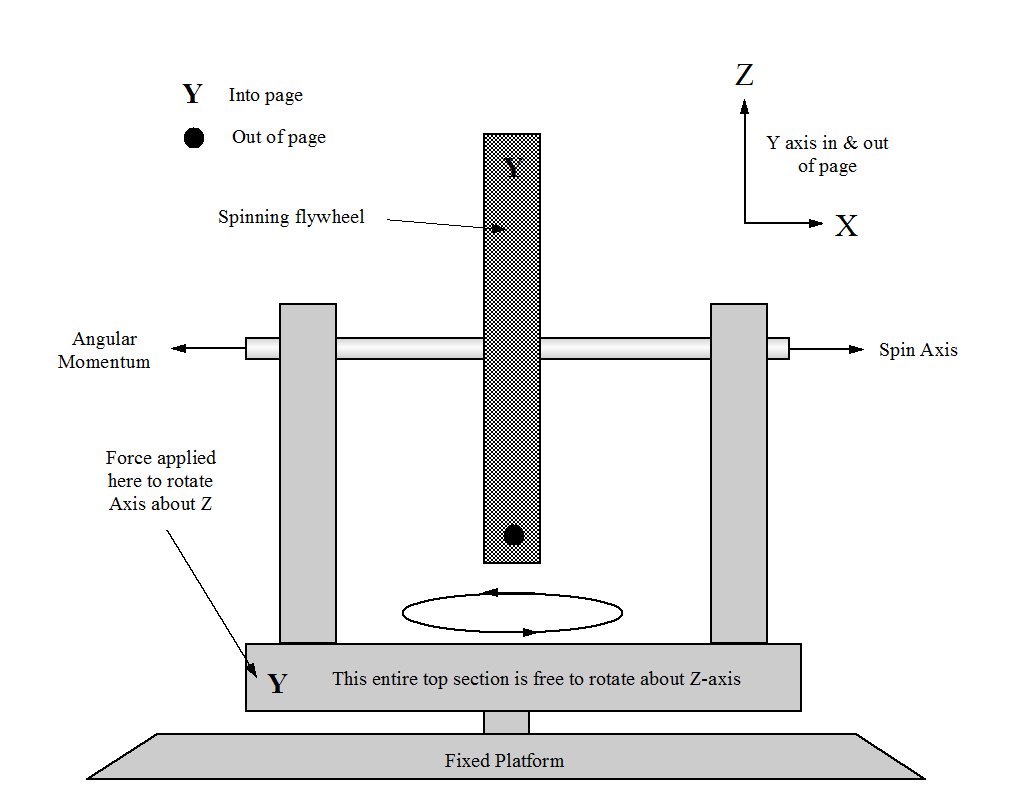 My question is WHERE has the energy gone ? What has it been converted to ? ie What evidence is there of work having been done ? (It seems that this energy just disappears, but we know that can't be.)

No net work has been done, and the energy of the system has not changed, because angular kinetic energy is $\frac 12I\omega^2$ and $\omega$ hasn't changed. (And neither has $I$.)

I think your trouble is in imagining that the force is applied through the whole 360 degrees of the rotation. Instead, you will apply a torque to accelerate the system, then an equal torque in the opposite direction to decelerate it. Between the acceleration and the deceleration, the system will rotate at a constant angular velocity about the $z$ axis. This is the angular version of Newton's First Law.

It feels like work has been done, because your arm is lossy, but if you could somehow pull the energy used to accelerate from some lossless energy store, then put it back during the deceleration, you'd come out even.

Ok, this question was very well posed and I think it deserves as high-quality an answer as we can manage. Here is my feeble attempt...

Most people who have manipulated a gyroscope observe that it seems to take more force to orthogonally rotate the gyroscope when it is spinning. What actually happens is that the original force they apply is redirected. This causes the person to instinctively apply a second corrective force to counter the redirection of the original force. This second force seems, to a person, to constitute additional work. In reality, the second force is only a static force, not a force through a distance, so it does not constitute actual “work”.

It is much like two people trying to move a car where the first person pushes on the rear bumper (the original force) and a second person tries to help by pushing on the car sideways (the second force). It seems like more total force is needed to move the car in this way, but so long as the car doesn’t move in the sideways direction that the second person is pushing it in, the second person does no additional work.

If one were to built the rig depicted in the excellent figure above, one would observe that the friction-less bearings supporting the shaft along the z-axis would apply the secondary forces, and that the effort needed to rotate the spinning gyroscope around the z-axis would not seem to be more significant.

Apparently this answer didn't do it for you. I will try from a slightly different angle this time.

There is a popular conception that spinning things gain "stability" as a consequence of their rotation. This is not wrong: if an object has a large angular momentum, and you want to change the direction of that momentum, it requires a large angular impulse (large torque, or a long time, or both).

The error comes in assuming that because a large torque is required, a large amount of work must be done. Work is the dot product of angular displacement and torque. If they're perpendicular, no work is done. And in this case, during the period that the flywheel axle is rotating around a vertical axis at a constant rate, they are perpendicular. You do not have to supply any torque about the vertical axis to maintain this rotation. All the necessary torque is supplied by the shaft mounts: there's an upward force on one of them and a downward force on the other.

Here is an analogy using linear momentum. Let's say you have a heavy block sliding frictionlessly on a track. Changing the direction of motion requires a force. If the track has a vertical loop in it, the direction of momentum rotates through 360 degrees. During that time, a large force was required to produce this change in momentum. The track supplied this force (it's the normal force). After traversing the loop, the block is traveling along the track at the same speed and in the same direction as it was at the beginning. So where is the evidence of the work done to rotate the block? There is no evidence because no work was done. The force was always perpendicular to the velocity. It's the same with the flywheel. The torque applied to the shaft of the flywheel during the rotation is about a horizontal axis, and is perpendicular to the angular velocity of the shaft mounts, which is about a vertical axis.

This is just a variation of your previous question. 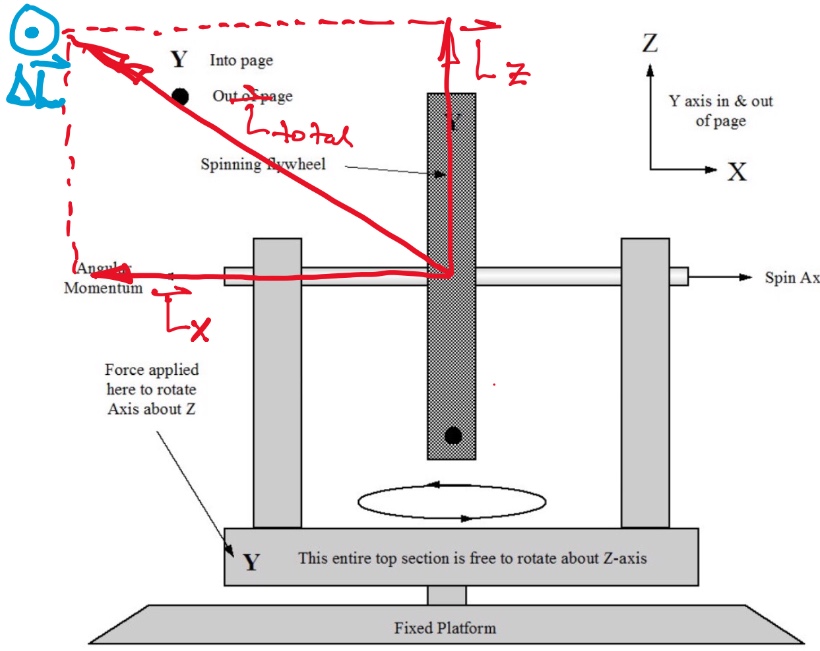 Here the change in angular momentum $\Delta \vec L$ is out of the screen and again you find that the displacement of the forces is at right angles to their direction, no work is done and the kinetic energy of the system does not change.

Not the answer you're looking for? Browse other questions tagged classical-mechanics energy angular-momentum energy-conservation or ask your own question.

5
How do I visualize the non-coaxial rotation of this device?
9
Where does the kinetic energy go?
3
Gyroscopic Force/Torque of a Constrained Wheel
0
Total angular momentum of a moving bike
0
Can/Does angular momentum apply a torque?
2
Is the parallel axis theorem valid for non-rigid bodies?
0
Confusion About Conservation Of Energy When Analyzing This Experiment
2
Why is angular momentum of object about its axis equal to that of a non-moving parallel axis?