Why is the distinction between Mott Insulators and Charge Transfer Insulators important?

Strongly-correlated metals often become insulators due to the repulsive Coulomb interaction, and the basic model here is the Mott-Hubbard Model:

Where $U$ represents the Coulomb energy cost of having two electrons on the same site/state.

For the charge transfer insulator, charges can move between individual sites within a unit cell (i.e. there are at least 2 orbital states for each unit cell $i$) with an energy cost $\Delta$. The charge transfer gap then represents the cost of moving an electron between the anion and cation within the unit cell. I assume this introduces another term in the Hubbard Hamiltonian that looks like: $$H_{CT}\propto\Delta\sum(\hat{c}_{C}^{\dagger}\hat{c}_{A}+\mathrm{h.c.})$$ Where $C$ denotes the cation, and $A$ the anion.

Often phase diagrams of $U$ and $\Delta$ are drawn like the one at the bottom of this post.

Why is the differentiation between the Charge transfer insulator and Mott insulator important? Sure, the physical origin of the gap $U$ and $\Delta$ require two different orbitals, but what difference does it make with regards to superconductivity, antiferromagnetism, etc.?

In other words, the Mott and Charge-transfer insulators are microscopically different, but who cares and why? 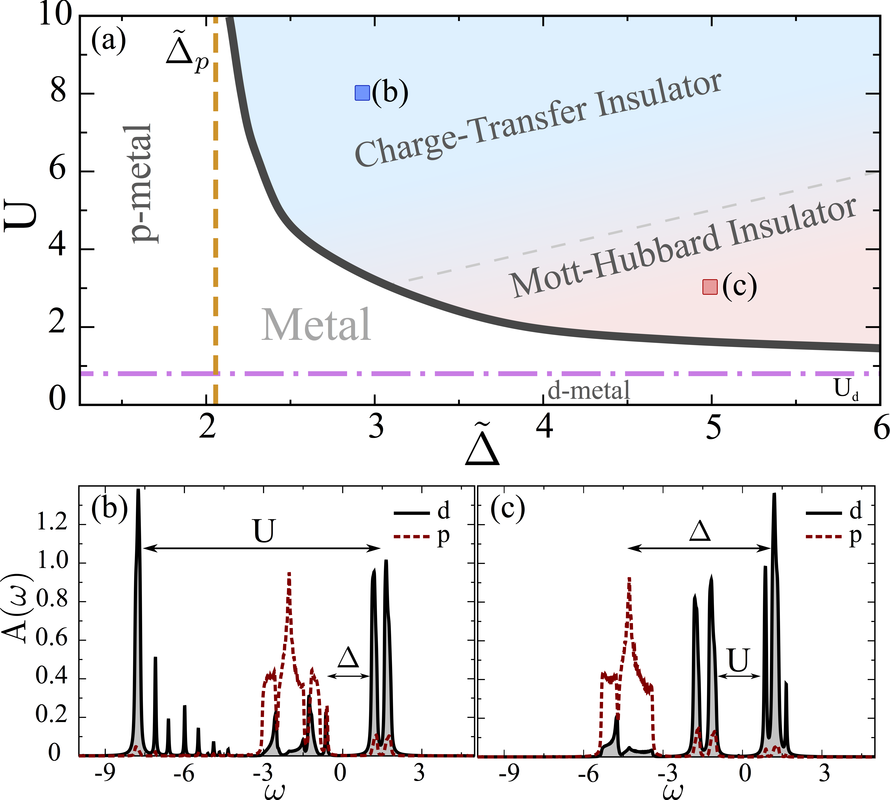 The issue is discussed in some detail in [1] , referring to perovskites as an example , applying second-order perturbation to the Hamiltonian $$\mathcal{H}=\epsilon_d\sum_{i,\sigma}d^\dagger_{i,\sigma}d_{i,\sigma}+\epsilon_p\sum_{j,\sigma}p^\dagger_{j,\sigma}p_{j,\sigma}+\sum_{ij,\sigma\sigma'}\left(t_{\left( pd \right)ij}d^\dagger_{i,\sigma}p_{j,\sigma'} + h.c.\right) \\ +U_{dd}\sum_i n_{di\uparrow}n_{di\downarrow}+U_{pp}\sum_j n_{pj\uparrow}n_{pj\downarrow}+U_{pd}\sum_{ij,\sigma\sigma'} n_{di \sigma}n_{pj \sigma'}$$ where $d$ refers to $d$ orbital holes in the metalllic ions and $p$ to $p$ oxygen holes. In perovskites the transition metal ions are separated by oxygen ions, so that there is negligible direct hopping between metal ions. Instead there is a significant overlap of $d$ orbitals of transition metals with $2p$ oxygen orbitals, so that hopping of $d$ holes from one metal ion to the other goes over the intermediate oxygens (ligands). Since oxygens are the only hopping channel, one may factor them out, recovering the standard Hubbard model. However tracking them through the $t_{pd}p^{\dagger}d$ term one sees that there are two hopping paths. The first one is $d^n\left(p^6\right)d^n \rightarrow d^{n+1}\left(p^6\right)d^{(n-1)}$, costing energy $U_{dd}$, where a $d$ hole hops from one ion to another and back via intermediate oxygen $p$ levels. The corresponding Heisenberg exchange constant is $$ J_1=\frac{2t_{pd}^4}{\Delta^2 U_{dd}}. $$ In the second case after first transferring a $d$ hole to the oxygen from a $d$ ion, $d^n p^6 \rightarrow d^{n+1}p^5$, one transfers to the same oxygen another $d$ hole from another ion, so that the intermediate energy is different from the first case, since we have two holes on the same oxygen. The corresponding energy is $\Delta=\tilde{\epsilon_d}-\tilde{\epsilon_p}$ i.e. the energy difference between oxygen and transition metal hole levels, or, more precisely taking into account the hole repulsion on the oxygen ions, $\Delta=\tilde{\epsilon_d}-\tilde{\epsilon_p}+U_{pp}$. This yields the exchange constant$$ J_2=\frac{4t_{pd}^4}{\Delta^2 \left(2\Delta + U_{pp} \right)}. $$ where the factor is 4 instead of 2 because there are twice as many hopping routes in the second case. The total interaction is
$$J_{tot}=J_1+J_2 =\frac{2 t^4_{pd}}{\Delta^2}\left(\frac{1}{U_{dd}} + \frac{2}{2\Delta+U_{pp}}\right). $$ Depending on whether the first or the second term in $J_{tot}$ is prevalent, one gets two different situations. In both cases, if $t_{pd} << \left(U_{dd}, \Delta \right)$, the ground state is a Mott insulator, but there is a difference in the lowest charge-carrying excitations. In the first case (pure Mott) the excitation creates an extra $d$ electron and an extra $d$ hole, leaving the oxygen unchanged. In the second case ( $\Delta < U_{dd}$, ZSA charge-transfer, prevalent in oxides of heavier transition metals such as Cu), we get a doubly occupied $d$ state and an oxygen hole (cf. Pieter's answer above). Now, if one hole-dopes the system, the extra holes would go in the MH case to the metal d orbitals, in the ZSA case they would go to the oxygens. In concrete situations this difference may be significantly affect a.o.t. the distribution of electron and spin density. Besides, materials on the left of the diagram above would have oxygen holes as charge carriers and "the properties in this regime may be quite nontrivial". Seems enough to care.

[1] 12.10 Charge-transfer insulators in Khomskii , Basic Aspects of the Quantum Theory of Solids Order and Elementary Excitations. 2010

If the cuprates would be pure Mott insulators, a doped hole would be on a copper ion, making this in a $3d^8$ configuration. According to Hund's rule, this would be a triplet, parallel spin. Instead, with a hole mostly in the ligands, a singlet can be the state with lowest binding energy. A singlet charge carrier, as Zhang and Rice wrote in 1987: journals.aps.org/prb/abstract/10.1103/PhysRevB.37.3759

Not the answer you're looking for? Browse other questions tagged quantum-field-theory condensed-matter solid-state-physics many-body quantum-chemistry or ask your own question.

0
Is there any difference between charge-transfer insulator and conventional (band) insulator?