Is coherent stimulated emission possible for particles other than photons?

By coherent stimulated emission I am referring to any process analogous to stimulated emission in lasers, where one particle interacts with an excited energy state, which leads to a second photon being emitted with the same phase, frequency, and direction as the first. Are there in particles other then photons for which this can happen?

I am curious for what particles it is even theoretically possible. I am not as concerned with whether it has been experimentally confirmed.

I remember reading that it is essential that the particle is a boson which makes some sense, is this true? Could it possibly work for composite bosons like mesons and He-4? Which elementary bosons other than photons could undergo stimulated emission?

There are "atom lasers", coherent states of propagating atoms that can be emitted from Einstein-Bose condensates. One can quibble about whether it is a laser since the 'L' is for light. In any case, it is experimentally demonstrated. While I have not seen any papers on alpha particles, helium atoms have been used.

Coherent stimulated emission seems to require bosons since it needs a large population inversion: fermions will not crowd into the same energy level, and hence decay from a population inversion will not produce coherence. The atom laser works because the BEC atoms become bosonic.

Are there any other bosons that could lase? I have a feeling it is unlikely to be practical for elementary bosons: W and Z bosons interact weakly (requiring a very dense medium) and quickly decay, gluons are colour confined, gravitons (beside being hypothetical) interact very weakly with matter. Maybe some mesons may be possible candidates inside the right kind of nuclear matter?

I remember way back , when proton decay was considered seriously ,

In particle physics, proton decay is a hypothetical form of radioactive decay in which the proton decays into lighter subatomic particles, such as a neutral pion and a positron.The proton decay hypothesis was first formulated by Andrei Sakharov in 1967. There is currently no experimental evidence that proton decay occurs.

The time frame is similar to the building of the first laser which was an exciting development bringing theory into practice:

The first laser was built in 1960 by Theodore H. Maiman at Hughes Research Laboratories, based on theoretical work by Charles Hard Townes and Arthur Leonard Schawlow.

I was suddenly struck by thinking of the whole world sitting on a population inverted quantum state.

Here is a table of the possible decay modes: 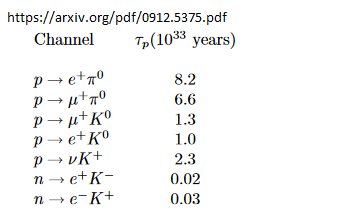 What if a single proton decay started the stimulated emission process? A charged meson lives long enough to meet other protons .

At the time, discussing with a theoretician, I was satisfied that the small value of the Heisenberg constant saves us from sitting on a bomb :). ( or being the proof that proton does not decay) .

Searching I found this article:

The feasibility of obtaining stimulated emission of both zero and finite mass particles from nuclei is considered, and the limitations imposed on the relevant nuclear parameters determined.

Note the date , 1974, close to the peak interest on the lasing process at the time. Unfortunately one needs a library or to pay for it in order to read the details.

Could it possibly work for composite bosons like mesons and He-4? Which elementary bosons other than photons could undergo stimulated emission?

"Undergo" is the wrong verb. "induce" is what you mean. It is the states with the inverted population that emit/undergo-stimulated-emission.

Not the answer you're looking for? Browse other questions tagged particle-physics laser or ask your own question.

6
How does a laser emit light in a coherent state?
1
Is there experimental evidence supporting the equivalence principle between different particles?
11
Can bosons have anti-particles?
10
Has a phonon, a formal quasi-particle, ever been observed as a point particle?
1
“Excitatonium” is made of electrons and the holes they leave — so how can they be bosons?