Why some materials pass light and others do not? [duplicate]

And what property is needed to own for this?

I can`t find this information

Absorption of Light by Material:

What is a Transparent object?

An object is said to be transparent when light passes through it without being dispersed, or scattered. Clear glass is transparent, and clean water is transparent. Although light travels through these materials, we know that they also block things like wind, sound waves and the movements of people and animals. For example, you can't walk through glass. So, how can a light wave pass through the glass without being changed at all? 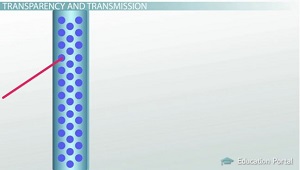 An object looks transparent because light waves pass through unchanged.

What really happens inside glass materials when a light wave passes through? We know that there aren't any tunnels connecting one side to the other. So, what's going on? When a light wave strikes the surface of the glass, it sets the electrons vibrating at a certain frequency. This frequency is not the resonant frequency of the glass. The vibrations pass from the surface atoms to the neighboring atoms and then on to more atoms through the bulk of the glass. The frequency doesn't change when the vibrations pass from one atom to another. Once this energy gets to the other side of the glass, it is re-emitted from the opposite surface. The light wave effectively passes through the glass unchanged. As a result, we can see straight through the glass, almost as though it isn't even there. So, now you know: transparency occurs because of the transmission of light waves through the bulk of an object.

When a light wave is neither absorbed nor transmitted by an object, then it is reflected.

Reflection - another cause for opacity:

Reflection is a change in the direction of a wave when it strikes a surface. Reflection can be specular (as in glossy or smooth-surfaced objects) or it can be diffuse (as in objects with rough surfaces). In either case, reflection occurs because the vibrations of the surface electrons do not pass their energy down through the material. Instead, they vibrate a little bit and then re-emit the energy back, away from the material. When this happens, the object appears to us as opaque. Opaque materials do not allow transmission of light waves. In other words, we can't see through an opaque object. We can only see the surface because the light waves are re-emitted from the surface back to our eyes. Opacity occurs because of the reflection of light waves off the surface of an object. 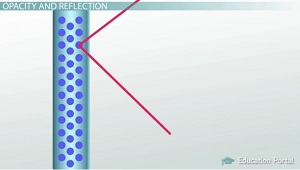 When light waves are reflected, an object appears opaque.

So, now you know that opacity occurs because of:

106
Why is glass transparent?

12
Why do some materials reflect (metals) and other materials reflect and refract (glass) from the quantum perspective?
2
Why does snow seem to reflect red light best?
15
What common materials absorb most infrared light?
3
Why do two beams of light pass through one another without interacting?
0
Are some wavelengths 'longer' than others spatially, and as such explain things such as longitudinal modes?
0
Why do different materials reflect different light?
5
Why can't light pass certain materials but Magnetic and Electric fields can