Getting an intuition of a “Vector Field” in General relativity

In GR the way we define a vector field is :

The a in the superscript is the abstract index notation.

I understand this attachment of a vector field if there is function at every point to act upon or along a curve.

Many times in GR there is a vector field attached to the space time without the specification of any functions or curve. What does it mean by this intuitively?

An example: For a time orientable spacetime (M,$g_{ab})$ we always have a timelike vector field.
- Okay I get the part that we have a vector field which is timelike. But what are these vectors at each point, rather what is the physical dimension of these vectors ?
- I am not sure if this is a right thinking or not but I am having trouble understanding the idea of a vector field when we talk about vectors as directional derivatives attached to every point.

How can this vector field be understood intuitively. For example when we talk about Vector fields in Classical field theory we attach a vector to every point in the space like an electric field vector (Having a physical dimension [Newtons/Coulomb] ) for a Electric vector field.

Edit: What is the r vector here in the example? I got everything else! 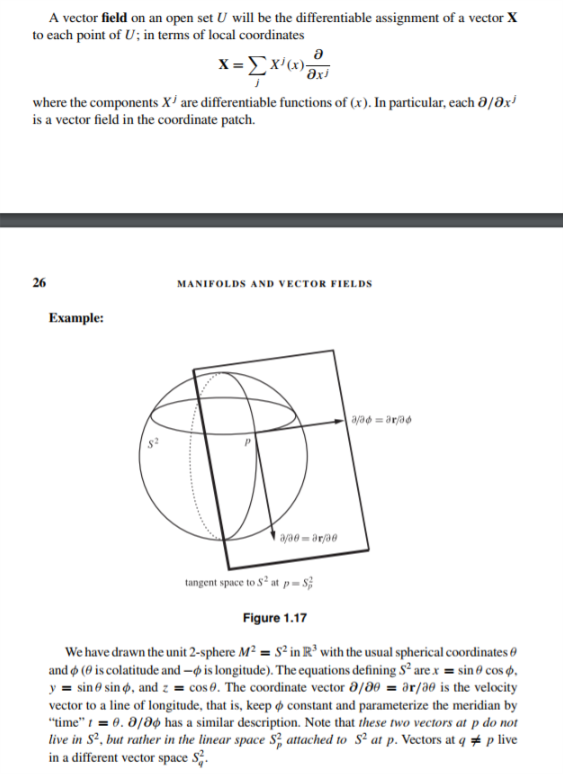 It turns out that given any choice of vector, there exists a curve such that the action of the vector on a function can be regarded as the directional derivative of the function along that curve. I expand on this more later in my answer.

In terms of raw intuition, the picture that you have in your head is not actually a bad one. Given some manifold $M$ (a sphere, say), at each point $p\in M$ you attach a tangent plane $T_p M$. Each tangent plane is simply a copy of $\mathbb{R}^d$, where $d$ is the topological dimension of $M$ (for a sphere, $d=2$), and vectors can be thought of as the familiar "arrows" which live in $\mathbb{R}^d$.

Picture that in your mind. What you are imagining is called an embedding of the sphere into a 3D space. The notion of gluing a plane to a point on a sphere makes real sense only if you're picturing the sphere as a subset of a larger space.

We would like to avoid this. In particular, if $M$ is supposed to represent the entire universe, it's a bit odd to try to model dynamics on it by appealing to a "top down" view from outside $M$. Instead, we would much prefer to take an intrinsic approach - to define vectors in a space without leaving the space.

Imagine that you're walking through your house, and you're measuring the temperature at each point. Let $p$ be a point in your house (notice that I haven't defined the point by some coordinate system or anything - $p$ genuinely represents a point, not a pair of numbers). The function

maps points in your house to the temperature at that point.

This is the central idea. If $f$ is a function on the manifold (i.e. your house), then the rate of change of $f$ at a particular point $p$ contains information about the direction at which you move through $p$, as well as the rate at which you walk - which amount to "direction" and "magnitude".

Our job now is to make this notion mathematically precise.

We should pause here to appreciate what this means. Up until now, we've typically defined a point by its coordinates, which means we have been implicitly choosing particular charts. Now, we recognize that a point exists as a point rather than as a list of numbers, and that the coordinates of a point completely depend on what labels we decide to apply to it.

We define a curve $\gamma:\mathbb{R} \rightarrow M$ to be a map which takes a real number and maps it to a point in the manifold $M$. If you'd like, the real number might represent time, but we aren't talking about physics yet, so for now it's just a parameter.

Derivatives along a Curve

This function takes a real number $t$ and maps it to the value of $f$ at the point in the manifold given by $\gamma(t)$. In other words, it is the value of the function along the curve $\gamma$.

Such a thing deserves a new notation - we will call it $V_{\gamma,p}$.

It also deserves a name - we say that $V_{\gamma,p}$ is the tangent vector to the curve $\gamma$ at the point $p$. The space of all such objects defined at a point $p$ is denoted $T_pM$, and called the tangent space to $M$ at $p$.

Having defined one tangent vector, we might now embark on a quest for others. Given some curve $\gamma$, is it possible to find another curve $\sigma$ such that $$ V_{\sigma,p}f = c V_{\gamma,p}f $$ for any choice of smooth function $f$ and any real number $c$? The answer is yes - therefore, we can multiply these tangent vectors by real numbers to get new tangent vectors.

Can we add them? That is, given two curves $\gamma$ and $\sigma$, does there always exist a third curve $\delta$ such that

for any smooth function $f$? The answer again is yes. I won't prove these two facts (the first is very simple, the latter requires a bit of though) - you can think about them yourself, or simply look them up.

In any case, this implies that $T_pM$ is indeed a vector space - we can add vectors and multiply them by real numbers.

This is the meat and potatoes of your question. Up to this point, hopefully things have been reasonable - but they have been very abstract. It's time to drop to the level of a chart and to see what these things look like when we define a coordinate system.

We can regard this as the composition of two maps:

When we differentiate, we do so using the chain rule:

Note: The symbol $\partial_a$ applies to functions $g:\mathbb{R}^d\rightarrow \mathbb{R}$, and means "the partial derivative of $g$ with respect to the $a^{th}$ slot."

Here's the idea: The symbol $\partial_a$ is used to differentiate functions on $\mathbb{R}^d$, which take $d$ real numbers as inputs. However, $f$ is a function on the manifold. Its only input is a point $p$, so how do we differentiate it?

The answer is as follows: We take a point $p$, we map it to its coordinates by choosing a chart $x$. We then differentiate the function $f \circ x^{-1}$ (which we know how to do) and evaluate at $x(p)$.

to be the components of $V$ in the chart.

That's most of the major technical machinery. In the old days, our definition of a vector was the list of numbers $(V^1,V^2,\ldots,V^d)$. Through the lens of differential geometry, these are just a particular choice of label for a more abstract object which exists independent of any particular choice of coordinate system.

You can also calculate what must happen to the components of a vector under a change of chart - this is a useful exercise, so not one that I will reproduce here.

Not the answer you're looking for? Browse other questions tagged general-relativity differential-geometry vector-fields or ask your own question.

12
Must every isometry have an associated Killing vector?
2
Killing vector contractions along isometric curves
1
Understanding the covariant derivative and its relation to parallel transport
13
How can a set of components fail to make up a vector?
4
Difference between a vector field and a force field
1
The necessity of using tangent space as the vectors in general relativity
1
Coordinate vector fields associated to normal coordinates
1
Why do we define acceleration as $\nabla_{v_X}v_X$?