By a simple dynamical model one can derive the equilibrium distribution of $N = n_1 + n_2$ identical two-level particles which are subject to Boltzmann-like thermal fluctuations. 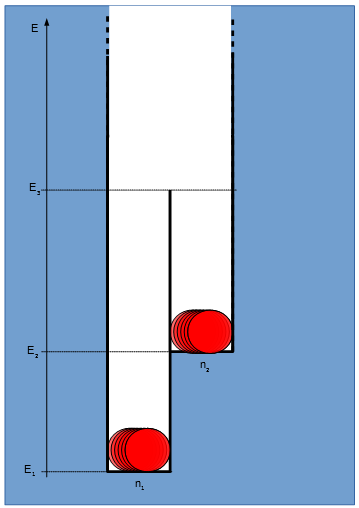 If $\Delta E$ is large enough to lift the particle over the energy barrier $E_3$ it may fall back with equal probability $0.5$ to state $E_1$ or $E_2$. Otherwise it will remain in its state.

We have (by definition)

With $p_1$ as above (Boltzmann distribution) we have

This (correct) result looks both like an insight (with a rather elaborate derivation) and like a sleight (which seems to help to understand the Boltzmann factor – but heavily relies on the Boltzmann distribution itself).

So what can be learned from this model?

Added (2): The Wikipedia article on the Boltzmann distribution confirms this asssumption. (Compare also @Pieter's comment that "it may be a proof that the distribution must be a negative exponential".)

This argument looks a bit circular and is not immediately convincing, but it may be a proof that the distribution must be a negative exponential. However, it does not really give a link to temperature.

In an earlier answer, I wrote about temperature, how one can show that the fractional change of the multiplicity with energy is the same when there is thermal equilibrium: $\frac{1}{\Omega}\frac{{\rm d}\Omega}{{\rm d}E} = \beta = \frac{1}{kT}$. Now consider a small system in contact with a large reservoir. The small system could be a single oscillator with equally spaced energies. These energies are so small that they would not affect the temperature of the large reservoir. Now, for each small amount of energy $E$ transferred to the oscillator, the multiplicity of the large system goes down with the same fractional amount. And that multiplicity is also proportional to the probability of the combined system. So the probability of finding the oscillator in a state with energy $E$ is proportional to $e^{-\beta E}$.

0
Why do objects stop cooling down / losing heat?
2
Another way to calculate the time constant of a system approaching thermal equilibrium