Why the rule of filling orbital is increasing $n+\ell$ where in the Hydrogen atom only $n$ gives the energy?

I figured out that to be able to determine the electronic structure of atoms, we have to fill by increasing values of $n+\ell$.

Thus, the greater $n$ is, the higher the energy is.

So why in the periodic table, everything is filled up by $n+\ell$ increasing and not $n$ increasing?

Is it because we can't use anymore the hydrogen atom as an example? 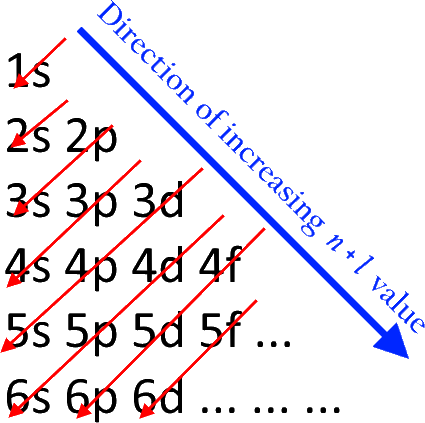 The electron configurations of atoms are dominantly governed by the electrostatic interaction: between the electrons and the nucleus, as in the hydrogen atom, but also between the electrons themselves. If you want to do this in full it is a crazy-complicated problem (broadly classed as electron-electron correlation) but the greatest contribution, as mentioned above, is shielding:

(For more details, see my answer to Why are the higher angular momentum states of a hydrogen atom closer to the nucleus?, particularly the second-to-last paragraph.)

Also, it's important to note that the Aufbau principle is not universally accurate: it is a good guide, but it does fail in cases where the complexities of many-electron atoms overwhelm it. (As one rough example, the ground-state configuration of copper is $[\mathrm{Ar}]3d^{10}4s^1$ rather than $[\mathrm{Ar}]3d^{9}4s^2$ due to the benefits of having a full $d$ shell.) And similarly, if you're going down the Aufbau-principle path, it's important to mention Hund's rules as important principles in determining atomic structure.

Thus far for multi-electron atoms. However, even in hydrogen, the assignment of energies as $E_{n,\ell}=-\frac{1}{n^2}|E_1|$ with complete degeneracy in $\ell$ is only an approximation: it is a good approximation, but the degeneracy is lifted by the fine structure contributions, which are essentially relativistic corrections (both via kinetic-energy modifications and via magnetic effects, including spin-orbit interactions), which are about $\alpha^2\approx 5\times 10^{-5}$ times smaller than the electrostatic dynamics (where $\alpha=⟨v⟩/c$ is the fine-structure constant, for $⟨v⟩$ the mean velocity in hydrogen eigenstates).

Since it's been mentioned in the other answer, there is also an additional hyperfine structure, which results from the interaction of the electron's orbital and spin magnetic dipole moments with the intrinsic magnetic dipole moment of the nucleus. For hydrogen in the ground state, this is responsible for the 21cm line at about 5.9 µeV (as compared to the fine-structure contributions at about 0.5 meV, a hundred times larger). Hyperfine structure, as the name indicates, is essentially irrelevant unless you're actively looking for it; as an example, any temperatures above 60 millikelvins will completely overwhelm this splitting.

Not the answer you're looking for? Browse other questions tagged electrons atomic-physics pauli-exclusion-principle orbitals or ask your own question.

28
Could the Periodic Table have been done using group theory?
13
Why are the higher angular momentum states of a hydrogen atom closer to the nucleus?
10
Is Palladium an exception?
2
Aufbau principle in modern quantum theory

2
How is the energy of an electron-shell related to the speed of electrons in that shell?
27
Why do non-hydrogen atomic orbitals have the same degeneracy structure as hydrogen orbitals?
1
How are Quantum Mechanical energy levels related to atom shells?
3
In chemical compounds, where does the “magic” come from in atomic “magic numbers”?
2
Origin of $\ell \leq n-1$ orbital rule