I mainly use black gel pens for writing. Every year in winter, I notice an awkward incident - almost every black gel pen refill that I have, start leaking! And it leaks regardless of the position in which I keep the pen - upright, slanting, horizontally on a table or upside down. For example, I unpack a new refill, and put it in the pen. After about 20 minutes, the cap is full of ink leaking out of the refill.

The interesting fact is that, this is not happening with refills of only one company. Till date, I've tried five different companies, and black refills from each of them are leaking in the same manner. It's leaking so much that I have had to throw the full refill most of the time.

However, none of the blue pens are leaking. They are kept under the same physical conditions as the black refills, but they're not leaking at all.

This makes me think that there is some physical phenomena associated with it. I've seen pens leaking at high altitudes. But I'm living in Kolkata, India, which is on the plains, and the altitude is barely 9m from the sea level.

This started mainly from last winter. Nothing like this happened in summer, and it has again started this year. The minimum temperature this year has dropped to 11°C in Kolkata.

The pictures are here: 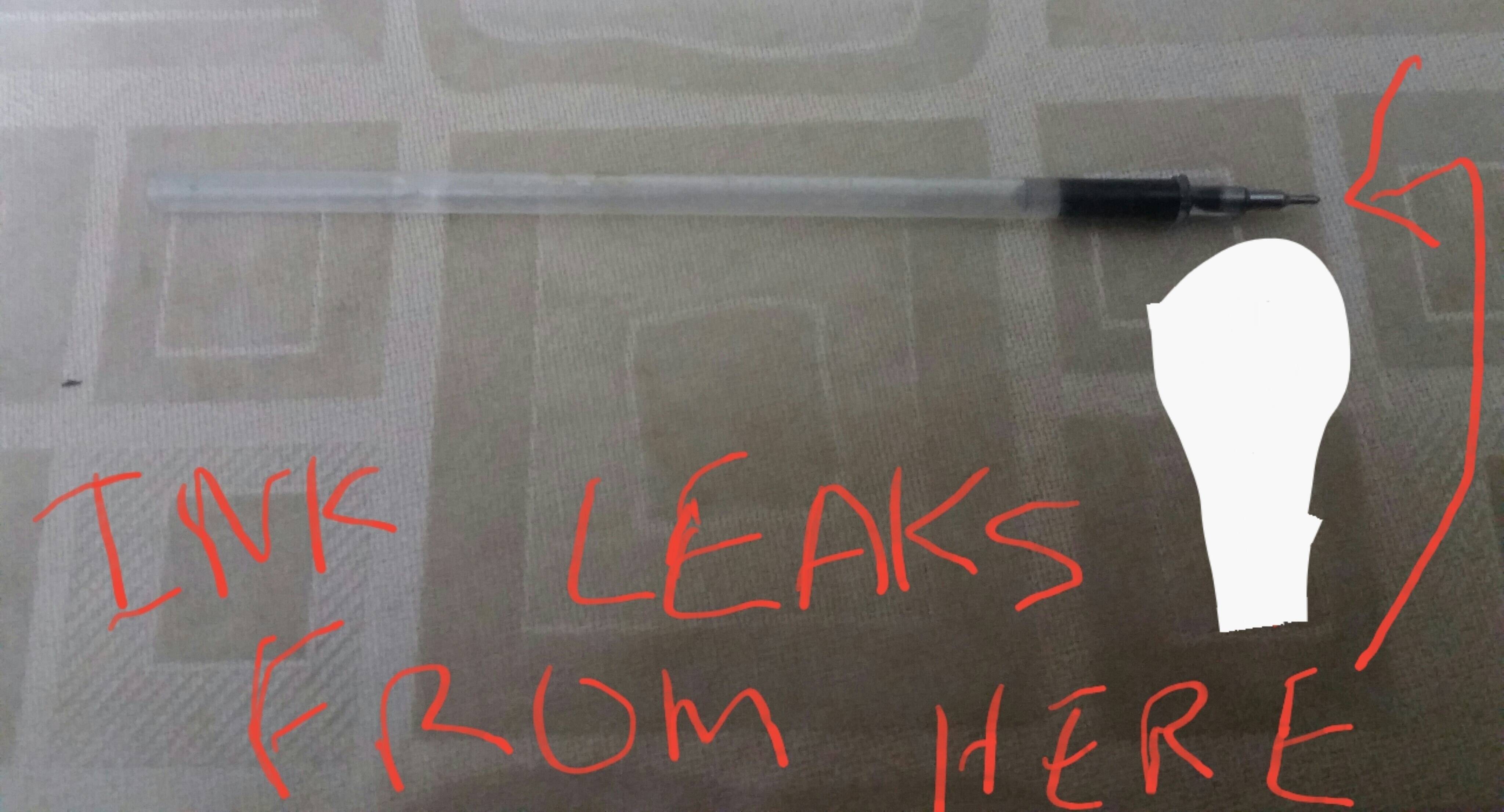 The ink is leaking from the tip of the nib and not the joint. 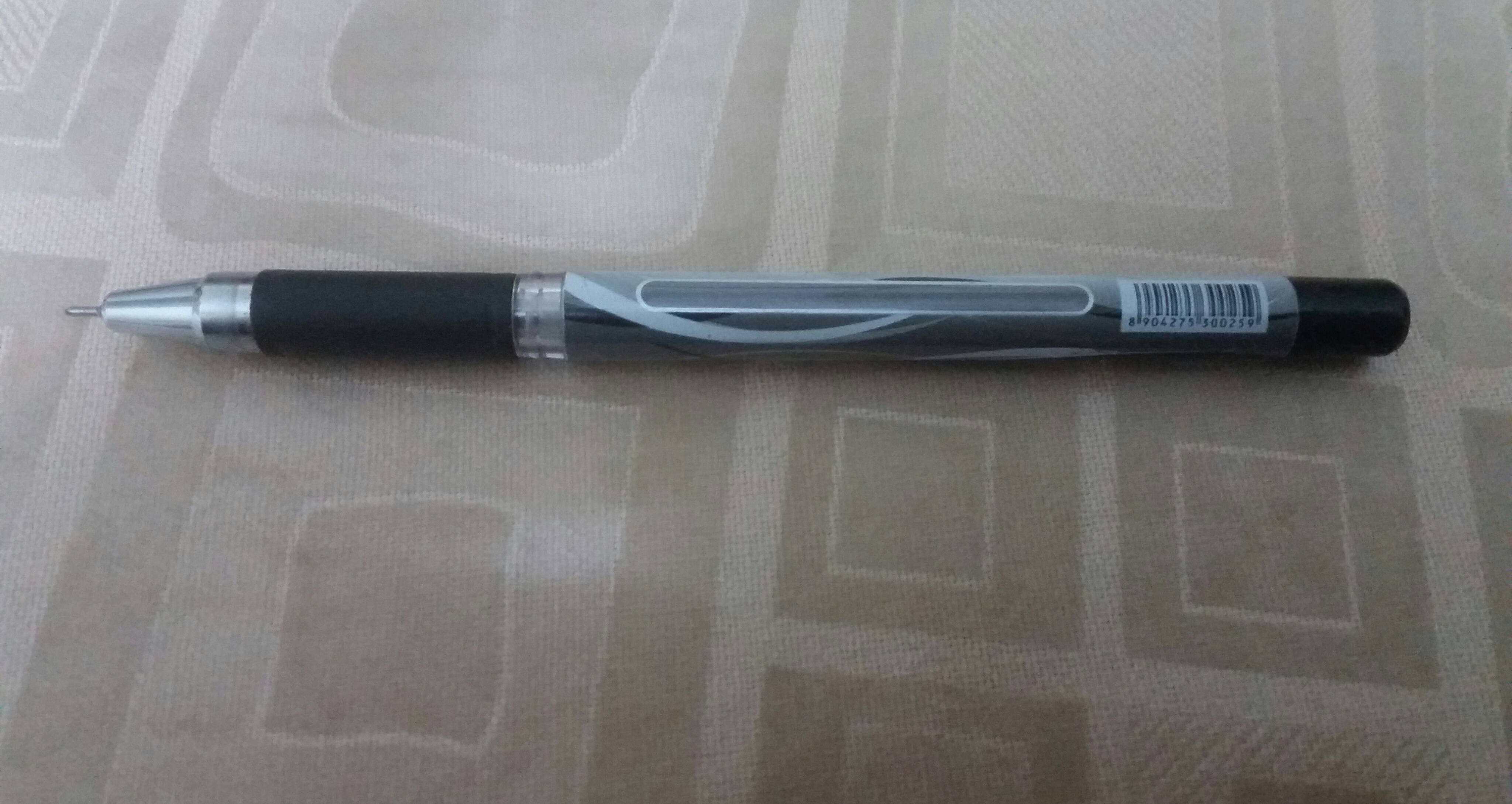 Can anyone account for this? And is there any way by which I can prevent it?

thermodynamics everyday-life
Share
Improve this question
edited May 27 '20 at 2:34

I think that temperature can be ruled out. Leaks due to temperature are more likely during hot weather, or after the ink freezes. Your circumstances do not fit either of these cases.

Increased temperature reduces the viscosity of the ink, so that by capillary action it is sucked into and through the narrow gaps between the plastic tube and the nib section or between the ball and its housing. Ink is mostly water so it expands when it freezes. Expansion can rupture the plastic tube, or permanently deform it so that it no longer fits tight against the nib section. When the ink thaws again, it seeps out of cracks in the tube or the larger gap where it connects to the nib.

The most likely cause which I can think of is a mechanical or design fault relating only to the black pen into which the refills are inserted. This would explain why changing the brand of refill makes no difference - although it is possible that different brand refills are in fact obtained from the same manufacturer - seePrivate Label. You could test this theory by inserting blue refills into black pens, and vice versa.

A post on Quora, Why does the Reynolds Trimax refill always leak? attributes the leak to the cap :

I figured out that the cap on the refills pushes air into it, effective breaking the seal and making the ink come out. I've even verified it. I took two refills and made a hole in the cap of one of them. Then I removed the caps from both of them multiple times. I found that the refill with the hole in its cap didn't leak no matter how much I uncapped it, but the refill without it leaked in 15–20 removals of the cap.

Gel pens dry out quickly, so it is necessary to store them with the cap on. A blog by supplier pens2order explains :

Like all writing instruments, gel pens do have their quirks. If the cap is left off for too long, the ink will dry up in a relatively short amount of time, something which rarely if ever happens with ballpoints. The cap of gel pens contains a tiny silicone ball, which when placed on the pen, forms an airtight seal which prevents the ink from drying out.

When a cap is pressed onto a pen this traps and compresses a volume of air between the cap and the pen. Increased air pressure forces back the ball of the pen, as when you write with it. This allows ink to flow out. I presume that the silicone ball mechanism allows most of this excess pressure to be released, allowing an airtight seal to be made while minimising air pressure inside the cap. It is possible that there is a manufacturing fault in the caps of the black pens which you use, but not in the caps of the blue pens, so that the silicone ball mechanism is not working as it should in the black pen caps.

However, it is difficult to see how this explanation would fit with your observation that the pens leak in winter. Silicone rubber expands more than polypropylene from which the cap is made; the coefficients are about 340 and 90 ppm per degree C. So the seal made by the silicon ball should be tighter in summer and looser in winter, suggesting greater likelihood of leaks in summer - contrary to your observation.

It is also difficult to see why the blue cap would not contain the same fault. Presumably both are made by the same process, and any colour distinction is added afterwards. Perhaps there is a difference in the colour of the silicone ball?

The Japanese company Sakura invented the gel pen in the 1980s and has this to say about Gelly Roll pen care :

It is very important to put the correct cap on the pen between uses ... In our Gelly Roll ink system there is a tiny silicone ball inside the cap that touches the tip and helps prevent any air from drying out the gel in the ball chamber when the cap is on.

This explains that the ball provides a seal at the pen tip, and does not act as a kind of valve regulating air pressure in the cap, as described above.

Another Sakura FAQ explains why its Pigma Micron pen is prone to leaks because of an air vent collar.

This is a theory which may be wrong but could be tested.

I looked on weatherspark.com (I have no idea if that is a reputable source) for the average daily temperature variation in Kolkata in June and January. They think that, in Jun the range is in the region of 5.5 to 8.3 degrees, while in January the range is between 11.1 and 12.2 degrees (Kelvin).

So my guess is that, because the daily swing is much higher in the winter the ink is getting pumped out of the pen by thermal expansion and contraction over the course of a day.

This theory should be fairly easy to test: find or create an environment with a lower temperature swing (either thermostatically or by insulation) and see if the pens stop leaking. To rule out pressure effects make sure that the environment is not too isolated from the surroundings (don't seal the pens into some container in other words).

Not the answer you're looking for? Browse other questions tagged thermodynamics everyday-life or ask your own question.

79
What causes ballpoint pens to write intermittently?
13
Is "dark clothes for winter, light for summer" relevant?
5
Reason for Debye cutoff frequency?
39
What is the reason for this pattern of noise in electric kettles?
1
Why doesn't a new ball-point pen write as smoothly as one being written for a little?
0
Why does a fountain pen soak ink automatically at times?
0
Which force is responsible for attraction of very finely ground non sticky material around the nib of pen?
3
What is the real reason for evaporative cooling?
0
Pressure activated gel cooling pads for dogs: what are the physics behind them?