How is quantum entanglement consistent with the relativity of time?

Suppose we have 2 quantum entangled particles separated by a large distance, but with one of them being near a massive black hole. We know that time slows down near massive bodies, so that if we try to describe this system with quantum mechanics (in which time is treated just as a parameter) we run into a problem: which clock's time should we use?

That is kind of the point of QFT and all the theories beyond that. You can find plenty of discussions on this topic on the site, see for example Is there a time operator in QM? and links therein. At the end of the day the search for a unified theory of QM and GR is one of the big open questions in physics, so the ultimate answer is: no one really knows how to do it.

This can, at least partially, be answered, even lacking a full framework of quantum gravity. The answer is that the simultaneity doesn't really matter.

To understand what I mean consider a case scenario with two particles/parties Alice (A) and Bob (B). Alice and Bob are spatially separated and they are entangled (or they share an entangled resource, or however you want to say it). The crucial point to understand is that, as long as A and B do not somehow interact or share information, their being entangled is completely irrelevant. To all effects, as long as A does not somehow interact/share information with B, her state is a classical mixture. Nothing A can do to her state can exploit the fact that there is an entangled party somewhere else in the universe, and same for B with his state.

So what about the fact that the operations performed by A on her state will "instantaneously" affect the state of B? Well you can simply say that from Alice's point of view, Bob's state is instantaneously affected by her action, in her time reference frame. This means that as soon as A and B will somehow use their shared entangled resource (which, remember, cannot happen faster than light), Alice will see that Bob's state was affected by her actions, and vice versa for Bob. There is no contradiction in this because the order in which Alice and Bob perform their operations on their part of the state will never matter. This means that any protocol involving Alice performing operation $U_1$, followed by Bob performing operation $V_1$, then Alice performing $U_2$ and Bob $V_2$, can be equivalently stated as Alice performing $U_1$ and $U_2$, and then Bob performing $V_1$ and $V_2$, or any other time ordering of the operations.

In yet other words, to use the entanglement the two parties have to be connected by a spacetime line following the usual rules of GR (in particular, no going faster then light). Before this happens, there is some deep sense in which it is not really meaningful to say that they are entangled at all.

Your question is located between quantum mechanics and special relativity, but luckily it seems that there can be given an answer in this case which is fitting with both theories.

The time parameter in quantum mechanics is the laboratory clock which is ideally not subject to any effects of gravity. This seems to be also the coherent solution within general relativity, see the following diagram of Kruskal coordinates. 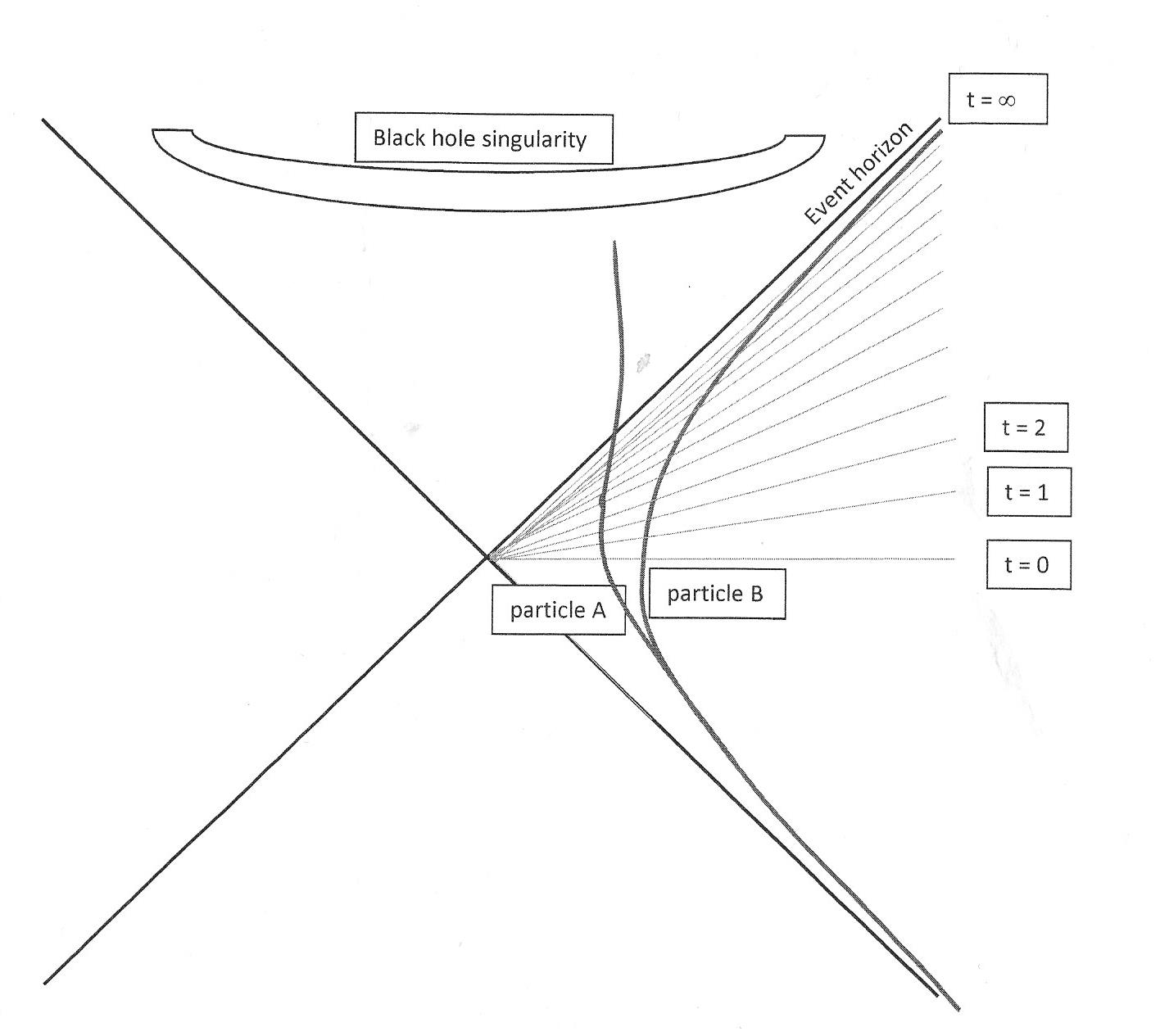 In this diagram you see the extreme case of particle A reaching the event horizon while particle B remains outside.

One remaining question is: Why choosing the clock of the far-away observer, why not choose arbitrarily any other clock? The answer: This is the only solution providing a coherent result which can be applied symmetrically to any particle of the universe. But there is no proof, which could only be provided by a theory of quantum gravity.

Not the answer you're looking for? Browse other questions tagged quantum-mechanics general-relativity time quantum-entanglement time-dilation or ask your own question.

3
What is Timelike Quantum Entanglement?
2
What's the relationship between quantum entanglement and the relativity of time?
2
How is strong time dilation consistent with weak tidal forces?
4
Does a clock oscillating in a friction-free hole through the center of a planet run slower than a stationary clock on the surface?
5
Does mass compress space-time?
3
Is Time emergent from quantum entanglement?
2
Can a system's orientation relative to direction of motion create additional relativistic effects?