Which force act at pivot and How the maximum value of the normal component of the force at the pivot is 850 N? [closed]

Ask Question
Asked 2 years, 9 months ago
Active 21 days ago
Viewed 548 times
1
$\begingroup$
Closed. This question is off-topic. It is not currently accepting answers.

A horizontal bar has mass 5 kg, length 0.30 m and has a mass M at one end as shown in the accompanying schematic sketch. A cable is attached at point A, 0.05 m from the pivot point (fulcrum) P and its other end makes a negligible angle with the a rod joined to the pivot P. The top end of the rod is fixed to the roof. The maximum tension the cable can withstand is 1050 N. Then which force act at pivot and How is: The maximum value of the normal component of the force at the pivot is 850 N and what will be the the maximum value of the horizontal component of the force at the pivot?

First i have calculated the maximum mass of object M which came out to be 15 kg. Taking Tcos∅= T.( ∅ is the angle between rod and cable). But i don't know the angle cable is making and am confused how to proceed solving this question. I don't have a clear idea how which acting will have components at pivot? If Tcos∅ = T then normal component will also be equal to 1050 N but in answer it says its not. Confused what will be the normal component of force at pivot?? 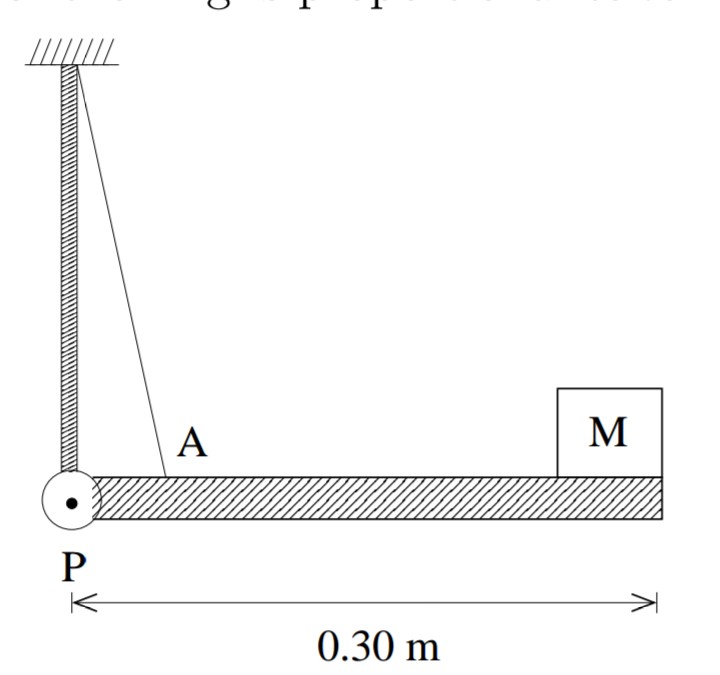 Just assume a force upwards/downwards(as its a rod) from the pivot and equate upwards forces to downward forces. You should get the pivot force with sign convention.

Not the answer you're looking for? Browse other questions tagged homework-and-exercises newtonian-mechanics rotational-kinematics rotation or ask your own question.

4
Why does a rod rotate?
3
Does a pivot exert an additional force, normal to the centripetal force, on an object rotating about it?
1
How to calculate the normal force exerted by a fulcrum off-center?
1
How does a rigid body constiting of two particles rotate?