I'm an undergraduate intern at a government lab specializing in plasma energy and fusion research. I've been assigned an interesting technical project that involves gathering spectrometer data (line emissions, specifically) from an on-site plasma generator. It's basically a large tube with a Helmholtz coil surrounding it. Under certain conditions (magnetic, voltage, pressure, and electrode distance), plasma can be formed. See image below for reference.

We have a spectrometer here that has a fiber optic probe which intakes the light from a source, and shows the data on a computer software program. The issue I'm running into is that the plasma from the experiment isn't very intense, so the probe isn't picking up on it too much at all. I wanted to know if there are any optics "techniques" or concepts I could use to get a stronger reading. I was thinking of having a series of reflective surfaces nearby that can focus the light into the fixed probe. I've got some other ideas to test out, but came here for a bit of inspiration. Any advice would be greatly appreciated! 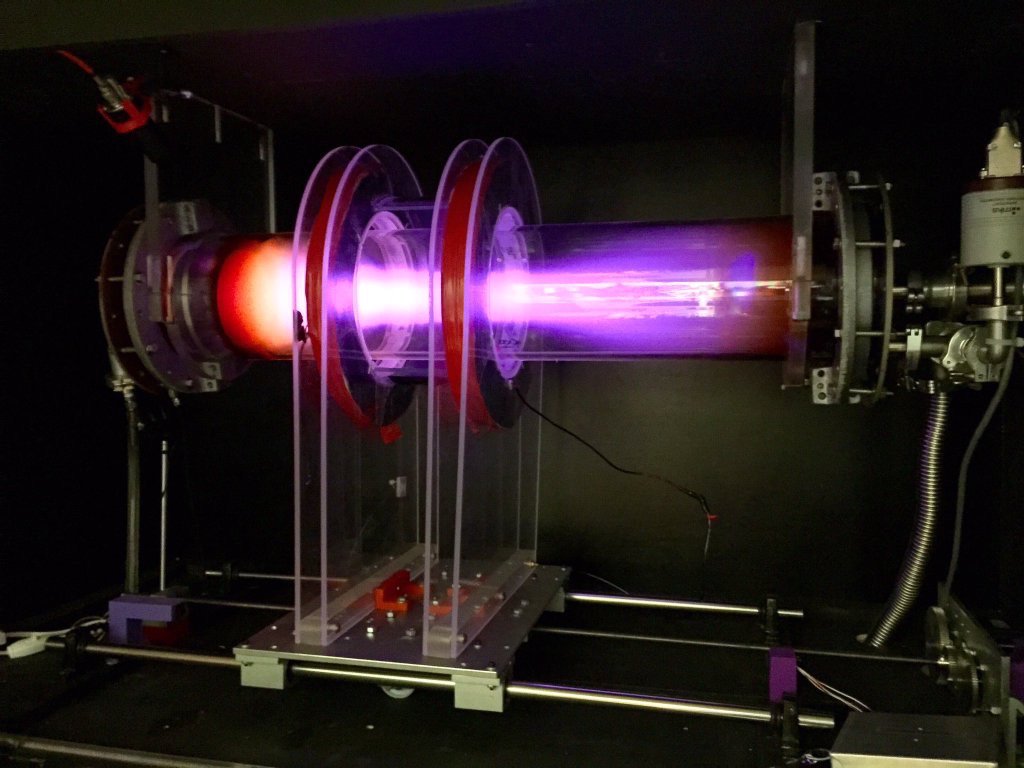 EDIT: After Floris' detailed answer, I'm going to take that advice and make a similar set up involving a lens. My initial set up involved an acrylic mirror slightly bent to converge the light at a point on the fiber optic cable. (See the picture below)

After contacting the company who made the spectrometer which I'm using, they suggested that since the incoming light is greatly divergent (as opposed to coming from one single source, like a ray, which.. the picture below depicts), that I should just order another fiber optic cable with a larger core aperture diameter. As it stands now, mine is 10um- he suggested to buy one that is around 200-400um. He stated that the set up I had wouldn't produce a significant result.

Left side shows the mirror set up, while the right shows (an ideal) lens set up.

My mentor gave me the O.K. to just purchase the equipment. If you guys want to test out the experiment, it can be remotely accessed from any browser in the world. Google "RGDX IPPEX" and follow the instructions! Thank you again, Floris!

Another edit: Just wanted to cite the site that I used to get that image https://ricktu288.github.io/ray-optics/simulator/

The first thing to do would be to use a lens. The light from your plasma presents a certain number of photons per unit area; if your collecting fiber has a small area, not many photons can enter. But if you put the fiber at the focal point of a large lens focused on the plasma, you should be able to collect more photons and get a stronger signal.

They key to this being successful include:

This diagram explains a little bit what I mean: 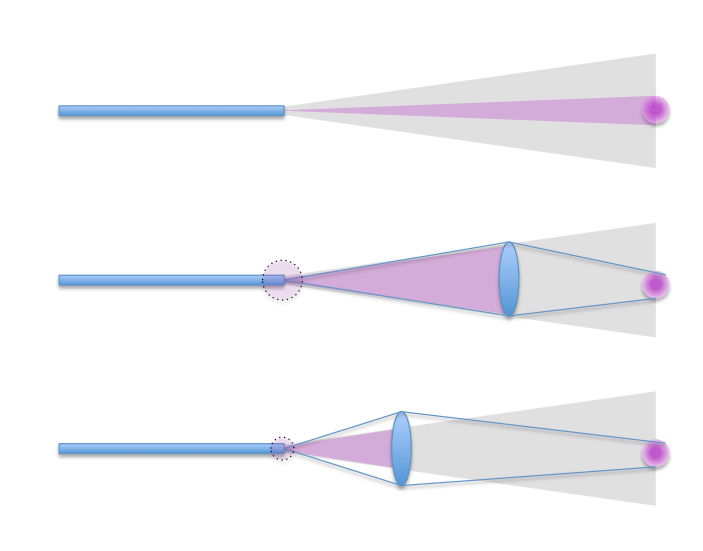 The top picture shows the current setup (as I understand it) - the fiber presents a small aperture to the photons emitted. The grey triangle represents the numerical aperture - light from anywhere in the triangle would be admitted by the fiber.

The second diagram shows an "almost optimal" lens placement: this lens is quite close to the source and collects photons over a larger solid angle; it then focuses them onto the fiber aperture. All light from the lens can enter the fiber because the lens fits inside the "cone of numerical aperture".

I say "almost optimal" because with an extended source (I drew it quite large) there is the problem that if you focus one part onto the fiber, another part will be imaged in a different place. I show this with the dotted "image" which is larger than the source. Photons are collected by the lens, but don't reach the fiber.

The third row shows that as you move the lens further from the source, it will provide less magnification - so more of the source ends up imaged onto the fiber. But you collect fewer photons... only the photons that land on the part of the lens in the grey cone will make it to the fiber.

Bottom line: the best you can hope to do is create an imaging system that "fills the aperture of the fiber with photons. If I am not mistaken, while imaging systems can help here because the allow a fiber to be "far from a small source", the extended nature of the source limits the amount of light you can collect to the same amount that you would get if your fiber were close enough that the source fills the numerical aperture (grey triangle) completely.

These are just some first suggestions; let me know if that's practical, given your setup, and maybe we will iterate.

6
Accuracy of various optical instruments
5
Efficiencies of Coupling Light into a Fiber
2
Characteristic quantities in Fiber optics
0
Using fiber optics to focus quartz tungsten halogen light
3
Does a lens with a given numerical aperture (NA) increase etendue, even if it follows a source (e.g. fiber) with lower NA?
4
Obtaining photoelectron counts from known radiance
0
Is laserlight coupled into an optical cable visible at the other end of an st connector?