Why is the top of the aurora red?

When the solar wind is strong enough, the top part of the aurora appears. It is often red: https://commons.wikimedia.org/w/index.php?title=File%3AAurora_Australis.ogv.

The aurora is the product of the following steps:

The two most common aurora colours, green and red are emitted by atomic [non-molecular] oxygen (wavelengths 558 and 630 nm, respectively). Importantly, the decay which emits green light occurs more rapidly than the red one.

At medium altitudes, atomic oxygen is quite abundant. Atom-atom collisions (step 3b) are quite common, so the slow emission of red light is suppressed. The aurora appears green.

At higher altitudes, atomic oxygen is rare. Atom-atom collisions are rare, so red light can also be emitted. This is the standard explanation for why the top of the aurora is red.

However, this explanation does not seem complete. There is no reason why green light should not be emitted at high altitudes (in addition to red light). So why is the top of the aurora red (with no trace of green)?

It's because there's more nitrogen at lower heights:

The green color of the aurora below 150 km height stems from the 558 nm line of Oxygen. It is not seen at larger heights since the 1S-state is not reached from the 3P ground state in collisions with electrons or protons. It is assumed that this state is produced in collisions of O(3P) with excited nitrogen molecules which give off their energy and take over angular momentum: $N_2^* + O(^3P) → N_2 + O(^1S)$

Oxygen becomes more common than nitrogen at heights above ~150 km (see figure below), where the help from nitrogen then becomes less likely to take place: 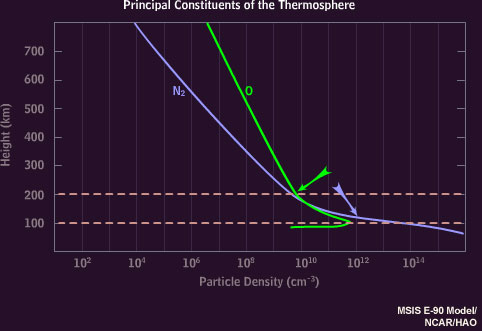 The aurora are caused by energetic electrons and protons impacting the atmosphere and exciting the atoms which then re-emit light. I have more background info in the following answer: https://physics.stackexchange.com/a/335325/59023 .

There is no reason why green light should not be emitted at high altitudes (in addition to red light). So why is the top of the aurora red (with no trace of green)?

Diatomic nitrogen is much heavier than monatomic oxygen, i.e., ~28 amu vs. ~16. Thus, if the gas is in thermal equilibrium – all constituents share the same temperature but heat fluxes can exist – then the monatomic oxygen will have a higher thermal speed than the N2. Thus, the oxygen atoms can migrate to higher altitudes more easily than the N2 molecules1.

Further, monatomic oxygen is more easily ionized than monatomic nitrogen with ionization energies of ~1313.9 kJ mol-1 and ~1402.3 kJ mol-1 (or ~13.62 eV and ~14.53 eV), respectively (there is a full list at https://en.wikipedia.org/wiki/Ionization_energies_of_the_elements_(data_page)). That is assuming that the diatomic nitrogen dissociated into two monatomic nitrogen atoms.

So why is the top of the aurora red (with no trace of green)?

Be careful here because the bottom of the aurora has red-to-magenta-to-violet colors as well, but much more faint. So we often do not see them with our eyes unless it's a very strong geomagnetic storm, in which case most of the emission is red, not green3.

Not the answer you're looking for? Browse other questions tagged optics atomic-physics plasma-physics geomagnetism or ask your own question.

6
How would the Aurora light on Earth look like if there wasn't a magnetic field?
6
What causes the vertical bands of light in an aurora?
4
Creating Aurora-like phenomenon in a laboratory
0
How does the aurora brightness depend on the distance from the poles?
1
Aurora Borealis
0
Green Aurora Light: Experimental Replication?
1
Why is the color of aurora borealis the way it is?

84
What really causes light/photons to appear slower in media?
1
How to distinguish between the spectrum of an atom in motion and the one of a scaled atom?
0
Does this photograph portray double muon impact with nanogold atoms?
66
Why is the sky never green? It can be blue or orange, and green is in between!
6
How would the Aurora light on Earth look like if there wasn't a magnetic field?
4
Colors of the Aurora
6
What causes the vertical bands of light in an aurora?
0
How does the aurora brightness depend on the distance from the poles?
1
Aurora Borealis