Reflection of radio waves at an obstacle with size half wavelength

I'm following a course about communication technology and the professor said the following multiple times:

"A radio/EW-wave is reflected at an obstacle which is higher/larger than than half of the wave length."

However, this statement confuses me, as I can not find any similar statement anywhere else in literature.

I know that a wave with a lower frequency - longer wavelength will tend to diffract more strongly at an obstacle. A wave with a higher frequency won't diffract that much, creating a larger shadow region behind the obstacle.

Does the above statement relate to the fact that the shadow region is larger? This would be in relation with HF waves being "better" in mountaneous regions than VHF waves, since their wavelength is higher. But isn't the wavelength of an HF wave at max. 100m, whereas a mountain is obviously a lot higher?

Where does this dependency on the half-wavelength come from?

Your instructor is right, but what really matters is being of order similar to the wavelength's ($\lambda$), rather than exactly $\lambda/2$. In any case, the 1/2 factor in your question almost surely comes from basic considerations in antenna theory, since typical antennas are modelled after the Hertizian dipole, which has a $\lambda/2$ size, and its size is universally taken as a quick rule of thumb for most efficient radiators (or reflectors). It stems from the fact that a pair of wires in the shape of dipole radiate with highest gain/efficiency when they capture (or radiate) a full half wave (bulge between two nodes), which is $\lambda/2$ (see texts on antenna theory, such as Balanis, chapter 1). In radio wave propagation contexts, obstacles of size roughly equal to the wavelength could cause more than simple reflection, as explained below.

The second part of your question (if I understand you correctly), related to diffraction, is more fundamental. First, I shall try to describe it in loose (but intuitive) terms, and then a bit more rigorously.

Generally speaking, it s a good rule of thumb to always look at any obstacles from the "perspective" of the wavelength: an obstacle looks big or small in comparison to $\lambda$. You can develop your intuition by imagining: a small wavelength as "seeing" more of the world's particles in its path and spending more energy to overcomes them (think of a child of short legs trying to pass though a ball pit, versus a man with tall legs doing the same; or a mobile signal trying to penetrate walls and seeing more details as $\lambda$ is smaller, and less details as $\lambda$ is larger). A large $\lambda$ will only have trouble when faced with mountains or forests, rather than individual buildings, say. Indeed, such observations are confirmed by technology: TV signals (which relatively have larger $\lambda$) travel further to reach rural areas, whereas mobile signals (a few GHz) can get attenuated quicker in walls and buildings, and require regular re-boosting. In fact, as mobile generations (1G, 2G, 3G, 4G, 5G) get higher, they tend to shift to higher frequencies to get more bandwidth for the users, but they struggle with increased attenuation (thus they keep pushing for building better receivers with higher sensistivity to capture smaller signals, or harvest it from multiple path reflections using clever signal processing techniques, etc). That is why 3G/4G phones can lose more of their battery charge relative to than 2G phones (everything else being equal) when trying to overcome low signal reception, say in a basement with poor coverage, by boosting their power levels, for example. Similarly, a chronic issue in the expected/upcoming 5G technology, is that by unlocking higher frequencies, the loss will become so large in walls and buildings that we need lots of nano/pico cells near the users to provide line-of-sight links (with complex MIMO antenna adpativity) most of the time to have viable communication. The smaller the wavelength, therefore, the closer we get to the optical (geometrical) limit of ray tracing (point to point clear path/visibility), whereas the larger the wavelength, the closer we get to Rayleigh's scattering limit. Between the two limits, Mie's scattering comes to effect. Generally, in the optical limit propagation is typically dominated by scattering/reflection losses; in Rayleigh's limit it is typically dominated by absorption/attenuation losses (but less scattering); and in Mie's scattering we must also add to them losses that occur due to resonance (when $\lambda$ is same order as the obstacle's size). For example, in satellite links, rain can be a big problem, because $\lambda$ may be proportional to the raindrop size, causing all sorts of losses (including de-polarization) to the signal. Scattering, therefore, is seen more when the wavelegth is comparable to the object size.

Now, more rigorously speaking, there are many ways to explain why larger $\lambda$ epxerience less obstacle loss than smaller $\lambda$. One explanation that is straightfoward to me is Fresnel zones and knife-edge diffraction (Fresnel parameters) (e.g. see Saunder's book, chapter 3): if you have two antennas forming a communication link, then you have two ways for the signal to make it, either as line of sight (LOS) or by reflecting off nearby obstacles and objects (e.g. hills, other buildings, cars, etc). In practice you may have both types, and plenty of such "multipaths" will meet at the receiving antenna to interfere constuctively or destructively. A Fresnel zone of order $n$ is defined as the 3D locus within which the following relation holds (figure below is modified from drawing originally in wiki page): 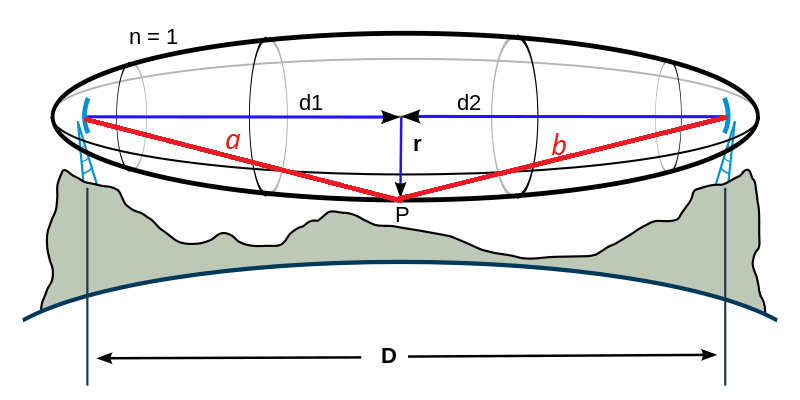 where $a+b$ is the indirect path distance travelled and $d_{1}+d_{2}$ is the LOS's distance travelled. The 1st Fresnel zone ($n=1$) looks like an ellipsoid, and is the most important zone for viable communication becase it includes the strongest signal (LOS) and constructive interferences of the two paths. The second zone follows, as larger ellispoid, and so on (the zones enclose each other like onion rings).

Thus, a communication link is not only captured by the LOS, but by an entire ellipsoid around it, with a radius equal to (for the $n$-th zone, and assuming radius << distances $d_{1,2}$):

As objects obstuct part of this ellipsoid, such as a tree or a building protruding within it, losses will occure to the signal received (typically the 60% core of the first Fresnel zone is forbidden to obstruction, if clear signal is required). Thus, the radiowave's LOS is not exactly the sharp optical/ray line one may expect, but rather the radio/wave zone seen as the ellipsoid between transmitter and receiver, with its width depending on $\lambda$, the smaller it is the slimmer the ellispoid and the closer to optical rays. We can see clearly now that if we are operating at small wavelength, the radius of the zone is small and an object of moderate size can block/reflect it completely, whereas at larger wavelength, the object may block part, but not all, of the signal, leaving enough signal to diffract over.

Diffraction also becomes geometrically sharp for smaller $\lambda$ (higher frequency), because wave-like behaviour is reduced and we have ray-like propagation. Particularly, knife-edge diffraction for a sharp edge that protrudes by height $h$ above LOS is defined by the Fresnel parameter $v$ (where $v<0$ means clearance, $v>0$ means shadowing):

which is seen to be driven to deeper shadows by having smaller wavelengths. You can convert $v$ to loss values using the appropriate curves/equations (e.g. see Saunder's book). This agrees with our experiences of wave propagation at lower frequencies (e.g. TV signals) compared to higher frequenies, as noted earlier.

Additionally, when the waves bounce off surfaces, the surface roughness controls how angularly-spread their reflection will be; rough surfaces scatter the signal not only in one angle according to Snell's law, but rather with standard deviation around it. Smoother surfaces give more 'specular' (optical/ray) reflections similar to perfect mirrors, that are closer to Snell's law. Rayleigh's criterion for considering a surface to be smooth requires having roughness less than $\lambda/(8\cos\theta_{i})$, where $\theta_{i}$ is the angle of incidence upon the surface.

I assume that your instructor intends this not as a precise statement but rather as a rule of thumb. If we let $\lambda$ be the wavelength and $d$ the diameter of a spherical obstacle, and assume the obstacle acts like a dielectric, then the limit $\lambda \gg d$ is Rayleigh scattering, $\lambda \ll d$ is ray optics (a geometrical shadow), and the intermediate case is Mie scattering, which I don't know much about. Your question is specifically about the intermediate case, but just for the sake of a crude estimate, let's pretend that the equation for the Rayleigh scattering cross section holds,

Total reflection would be the case where the cross-section is basically the same as the geometrical cross-section $\pi(d/2)^2$. Neglecting all factors of order unity and setting the Rayleigh cross-section equal to this, we get $d\sim\lambda$, which is essentially what your instructor is claiming. Of course this order-of-magnitude estimate is much too crude to allow me to make any statements about your instructor's factor of two, but it seems reasonable.

Because the exponent of $d$ is 6, the intensity of scattering depends extremely strongly on $d$. Although this exact proportionality won't hold when we aren't in the appropriate limit for Rayleigh scattering, I would still expect an extremely strong dependence on $d$. Therefore it makes sense to imagine that there is a very sharp cut-off in terms of the size of the obstacle, as described by your instructor.

I think the basic physical insight is that this is dipole scattering, in which the incident wave induces an oscillating dipole moment in the dielectric, which reradiates. When $d\ll \lambda$, radiation is an inefficient process; at any point in space, there is only a small difference in path length between the positive and negative portions of the dipole, so there tends to be strong cancellation of their contributions, which were emitted with opposite phases. But once $d$ becomes comparable to $\lambda$, the efficiency of radiation becomes greater.

Not the answer you're looking for? Browse other questions tagged waves electromagnetic-radiation reflection diffraction radio-frequency or ask your own question.

29
Radio antennas that are much shorter than the wavelength
0
Sequence of E and B field in radio waves and in single photons
0
Directionality of sound depending on emitter size and wavelength
0
Knowing more about electromagnetic waves
2
Why don't radio waves ruin electronics?
0
Radio wave behaviour in reflection, Refraction and Diffraction
22
What is the scientific explanation for radio waves bending around the Earth?
1
Radio Waves / Light: Atmospheric Refraction