I am using the three rules of Feynman for calculating probabilities (as outlined in http://www.feynmanlectures.caltech.edu/III_03.html)

(1) Probability of reaching a state is the square of an amplitude for reaching that state.

(2) When a particle may reach a state via two different routes, the amplitude for the process is the sum of the amplitudes of the two routes.

(3) When a particle follows a first part and then a second part of a route, the amplitude of the entire route is the product of the amplitudes of the two routes. 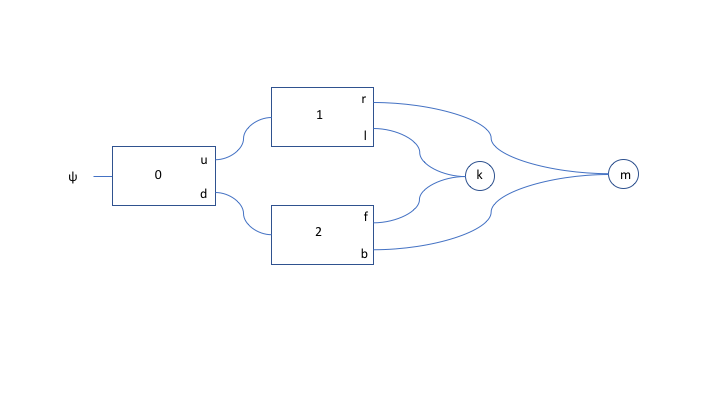 I consider a two-state spin 1/2 system and three devices (0, 1 and 2). Each device splits an incoming stream of particles according to its spin property with respect to a unitary base. Think Stern-Gerlach.

For device 0 the unitary base is (u,d), for device 1 it is (r,l) for device 2 it is (f,b). We may think of up, down; right, left; forward, backward and in 3-space of the z, x and y directions. The devices are wired as in the drawing. Two outputs each of the two devices 1, 2 in the second stage are combined and connected to particle counters k and m. The entire setup is protected against external influences. Measurements are made only in the detectors k and m.

Now my problem: The probabilities do not always add up to 1. As example let us take u=r=f=z+ and d=l=b=z- and as initial state x+. Then we calculate an amplitude of $1/\sqrt{2}$ for arriving at detector m via the path through u and r and the same amplitude for the path via d and b. The amplitudes add up to $\sqrt{2}$ and the probability is 2.

I realize that I have a misunderstanding of the above rules here. What exactly is wrong in my mental model?

(2) When a particle may reach a state via two different routes and there is no possibility to find out, which route had been taken, the amplitude for the process is the sum of the amplitudes of the two routes.

The situation is clear in case $<r|b>=0$ and $<l|f>=0$. In these situations the particles have an additional marking which could be measured in principle and which destroys interference.

However, this is not always the case. As example I shall use $u=z+$, $d=z-$, $r=x+$, $l=x-$, $f=y+$ and $b=y-$. Here detector $m$ cannot reliably or cannot always distinguish the path u-r from the path d-b. There is no spin measurement which can always distinguish an $x+$ from a $y-$ spin situation. Moreover, if I now rotate the y-axis into the x-axis I thereby can modify the possibility of distinguishing the paths.

I realize this is what http://www.feynmanlectures.caltech.edu/III_03.html describes in 3-2. Although the text illustrates a quantitative treatment of the situation, it does not give complete formulae but uses values $a$ and $b$, to capture the effects of the frequency of the light used for the attempted distinction of the two paths.

In my situation it should be clear that the probability for $m$ to distinguish the paths has a dependency on $r$ and $b$. There may be better or worse possibilities for $m$, but the optimal distinguishability will depend on $r$ and $b$. I am not sure, how this enters the picture. In the general case I am somewhat in between the two situations whether to (1) add amplitudes or (2) add probabilities.

So, how do I apply the rule (2), now that the I cannot clearly say "yes" or "no" to the question whether the paths can be distinguished. I am looking for a simple formula for my toy case, not a generic capturing in parameters as in the Feynman text. (Which, in his scenario, would probably need full-blown QED, so it is not done in that text.)

The rules you've talked about above apply only to particles which have no properties besides their position; you need to be more careful when dealing with particles with spin.

Feynman anticipated this back in Lecture 1, where the postulate is stated as

If an experiment is performed which is capable of determining whether one or another alternative is actually taken, the probability of the event is the sum of the probabilities for each alternative. The interference is lost.

Your second question touches on a different issue. For concreteness, let's consider a sharper situation: keep everything aligned along $z$, but right before the spin down particle gets to point $k$, we put it through a magnetic field that swaps spin up and spin down by precession. Then everything that gets to $k$ is spin up, so we can't tell how it got there at all.

The problem here is that the implied time evolution is not unitary: two distinct physical states (a spin up particle on one path, a spin down particle on another) both evolve to the exact same final state. If you run that in reverse, you've broken determinism! Such evolution is forbidden in quantum mechanics. It's not in Feynman's axioms because it's a statement about the dynamics, while his axioms are just for getting predictions out once you know the dynamics.

To see why this can't happen in another way, note that the splitting and refocusing of beams by Stern-Gerlach apparatuses depends crucially on the fact that spin up and spin down particles feel different forces. If you have two beams of spin up particles, you can't merge them; they feel the exact same force. You might think you can do it with some trick, but this rule runs deep; it's even baked into classical mechanics as Liouville's theorem.

Your more general case with partial distinguishability is similar. The more distinguishable you make the paths, the better you can combine the beams. You can probably get a quantitative unitarity bound with some work, but I would imagine it gets kind of complicated; this is why Feynman does his best to avoid talking about it.

Not the answer you're looking for? Browse other questions tagged quantum-mechanics quantum-spin interference or ask your own question.

6
Why is time evolution unitary?

2
What is the relationship between distinguishability and probability in Quantum mechanics?
0
Problems in understanding Feynman's concept “Probability of bullets hitting on the backstop”
0
Transition Probabilities and Amplitudes of atomic levels
0
How to calculate probabilities of eigenvalue of observable with multiple eigenvectors (degeneracy)
2
Understanding the Double Slit Experiment without Path Integrals