Is it possible for a car to pull down a helicopter?

https://youtu.be/jzUFCQ-P1Zg?t=426 from this great BMW ad, I was curious if the helicopter being pulled by a car is even remotely possible?

Yes, in this instance it can

So the question here is: can the tractive force from the car overcome the lifting capacity of the helicopter?

The comments say the car is a BMW 540i, clearly it is a sedan model and it seems to be an automatic. The weight of that car is — according to BMW USA — 3847 lbs.

What tractive force can that achieve? On a dry surface, you can achieve a friction coefficient of up to 0.9 with car tires.

So the tractive force a BMW 540i can achieve should be around 1500 kg under ideal conditions. 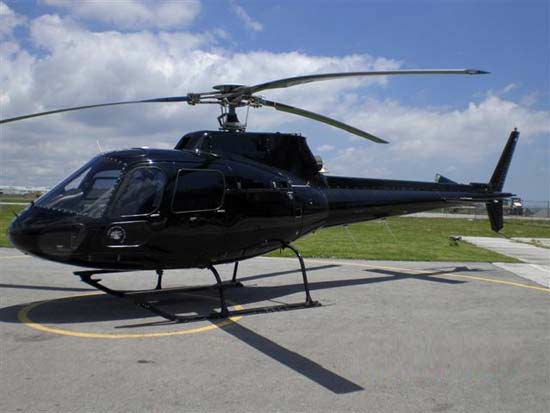 This means that it is possible for the BMW to be overpowering the helicopter by several hundred kilograms. Add to that the confusion and chaos of the situation, along with the turbulence of being so close to the ground, and it is more than likely that suddenly gaining a 1.5 ton load on the helicopter will drag it down before the pilot can take approriate action, like detaching the sling assembly (if that is even possible).

What I want to know though is how the edge of the sun-roof survived pulling over a tonne — focused on that little hook — without buckling. ;-D

Why they would want to hook the car to the helicopter is a mystery to me because that helicopter cannot lift that car. The helicopter's lifting capacity is short by about 1500 lbs / 675 kg.

Now assume that they have gotten to a standoff. The helicopter is hovering at full power. The car is standing still directly under it. The weight on the wheels is 675 kg, and with a friction coefficient of slightly less than 0.5, this still means a possible traction force of 300 kg / 3000 N.

At this point the driver steps on the gas. If the helicopter intends to remain stationary, it must start tilting to counter the sideways force that the car is exerting on the wire. But that means the lifting force is diminished. This relieves the car of lift and more weight is put on the wheels. This means the car can exert an even larger sideways force. The helicopter must tilt more. Less lift is put on the car... and so forth.

The helicopter has entered into a version of a dynamic rollover.

So unless the pilot intends to crash really quickly, they must follow the car obediently. The car is now driving around with a helicopter, like a balloon on a string!

So in short: this scene makes no sense because — unless the helicopter can lift the car in its entirety — a car can always either drag it down or, force it to follow.

If the car weighs more than the helicopter can lift then, obviously yes. Whether that's true depends on the car and the helicopter. For instance the Bell 505 Jet Ranger X has a maximum payload of well under a tonne: if you were willing to push it beyond what is safe and you were very light it might be able to lift a light sportscar (for instance Lotus Sevens can weigh half a tonne). But it's not going to lift a big SUV, anywhere near. On the other hand Chinooks have (depending on model) maximum payloads of over ten tonnes: perhaps there are cars which they can't lift, but they are probably armoured cars.

Not the answer you're looking for? Browse other questions tagged newtonian-mechanics forces aerodynamics estimation or ask your own question.

8
Number of blades in a helicopter rotor
4
What determines the speed required to pull a table cloth?
1
Can a helicopter trapped in a bubble generate lift?
0
How can I calculate the force a giant knife applies to a car if it cuts straight through?
0
Torque and force on a tire iron
0
Why does the center of mass of car- Earth system changes with the car moving while no external forces acting?
1
Why does a corner slow a car down?
4
Why it cost toy helicopter more energy to stay at higher place?