Illuminance at a given distance from a diffuse emitting light box

Therapeutic light boxes purport to deliver 10,000 lux to a user, typically sitting ~24" from a box. I was wondering how many lumens are necessary to achieve this illuminance, e.g. what lamps would be necessary to build such a box.

Suppose the light box has a flat, square diffuser, where the square has a total area $A$. The box emits a total of $l$ lumens. Given the distance $d$ to the light source, can we have a formula for the illuminance received by a viewer centered in front of the light box, facing it directly? 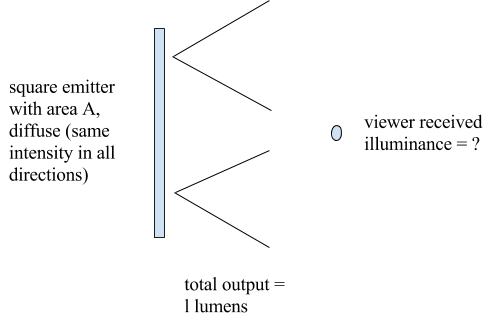 Here's my thinking so far, by referring to Photometric quantities and this handbook. It doesn't quite seem to work.

But wait -- the units seem wrong now. I should have gotten lm/m^2 (lux), not lumens. A single point only receives an infinitesimal amount of lumens. Where did this go wrong?

(1) In reality, the corners of the boxes are farther, so it appears a smaller area. I wonder how much effect this has.

Imagine that the light box is instead an isotropic light source. Then at distance $d$ the $l$ lumens would be spread out over an area of $4 \pi d^2$, and the illuminance would therefore be $l/4 \pi d^2$. But it only shines into half the hemisphere, and the total light emitted in any direction goes like $cos(\theta)$ so as you say, you need to multiply by 4 if the observer's position is more or less directly in front of the box. So you get $l/\pi d^2$ lux. The area of the box doesn't matter--a bigger box will cover more of the observer's field of view, but won't look as bright.

There is an inconsistency in your last step. You have calculated the luminous intensity for light leaving the entire box (lm/sr). You then multiplied by the solid angle subtended by the box relative to the viewer. This tells you the total lumens incident on an area the size of the box at the location of the viewer (if the viewer had the same area as the box, it's the total amount of light to hit the viewer). If you want the illuminance, you need to divide by this area.

Not the answer you're looking for? Browse other questions tagged optics visible-light luminosity photometry or ask your own question.

6
Relationship between measures of light (candela and lux)

1
How do I calculate the apparent brightness of a mirror reflecting the sun at a given distance?
2
How do I convert lux to lumens
1
Best way for calculating Lux from candela vs from lumen?
12
Light's inverse square law: Does it require a minimum distance from the source?
2
Why do we need to define both luminous intensity and illuminance?
0
Is my illuminance calculation correct?
0
What could be the meaning of "illuminance" in this home device?
0
Photometry and seemingly two different definitions for foot-lamberts, why?