Is there any material insulating in one direction?

Is it possible for a material to be insulating in z direction but conducting in x and y direction? If so want would be the DOS diagram looks like? Will there be a band gap or not?

It depends, it depends. Its difficult to answer your question compeltely because there are so many possible definitions for "materials", and what do you mean by direction? I'm not trying to be pernickety, but are you talking about individual molecules, crystals, or macroscopic electronic devices? All will have different answers. Do you mean direction on the molecular scale, or on a device?

But, what you might find interesting to consider is conjugated polymers.

These are long, thin conducting plastics. The simplest is called polyacetylene. It looks like this

We can make it as long as we want. It conducts because of the double carbon bondss. One valence electron on each double carbon atom resides in an orbital pointing upwards, which is orthogonal to the other three sigma-bonds.

All the upwards pointing orbitals combine with each other, to form a molecule wide delocalised set of orbitals. Through some oxidation reaction, some of these electrons will be lost.

Now you have a one-dimension electronic band, and the electrons within this band become mobile when it is partially emptied. If you want a mathematical rigour this can be described in the tight-binding model. The DOS looks like 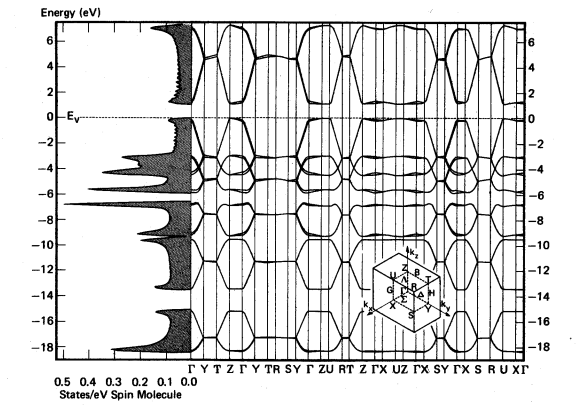 Where $E_{v}$ corresponds to the top of the valence band.

These polymers will have good conductivity in one direction. Conductivity in the perpendicular direction depends on how well you can align your molecules and how close they are together. You could extend this to be two dimensional by attaching strips on the ends of the polymers.

We can adapt this molecule to be a good semiconductor by adding some more fancy molecules onto the backbone. A particular one of research interest at the moment is pentacene:

These have HOMO and LUMO levels, analogous in many ways to the valence band and the conduction band, and are organic semiconductors. According to Sigma - its HOMO and LUMO energies are HOMO $5eV$, LUMO $3eV$ (with respect to the vacuum level). - Thats a band gap of $2eV$

Is it possible for a material to be insulating in z direction but conducting in x and y direction? - Yes - molecules which only have one dimension.

If so want would be the DOS diagram looks like? - Depends on the orbital geometry.

Will there be a band gap or not? - Depends on the material (but generally yes, but you have to think of the orbitals - its quite different from metals, but thats a story for another day).

In an effective manner, we try to describe a system with anisotropic mass which for a z-direction diverge. this system has a metallic character in XY plane but insulation in the z-direction.

Not the answer you're looking for? Browse other questions tagged condensed-matter solid-state-physics electronic-band-theory or ask your own question.

6
Are electronic wavefunctions in band gap insulators localized? is a single-particle picture sufficient in this case?
2
Dopant concentration and changes in band gap energy
4
Valence band and conduction band, trying to get a clear picture!
0
Understanding Wikipedia's “Semiconductor Band Structure” diagram where the bandgap appears to increase with increasing density of states
2
Is a gapless system always conducting and a gapped system insulating?
1
What can we learn from a band structure diagram?
1
Is there an upper limit on the band-gap of insulators?
2
Destruction of Mott phase by a external magnetic field
4
What is topological material?