why is the photopeak at a higher energy than the compton edge?

Why does the photoeffect deposit more energy than interactions via Compton scattering? Or the other way around: Why is the photopeak right (at a higher energy) than the Compton edge? 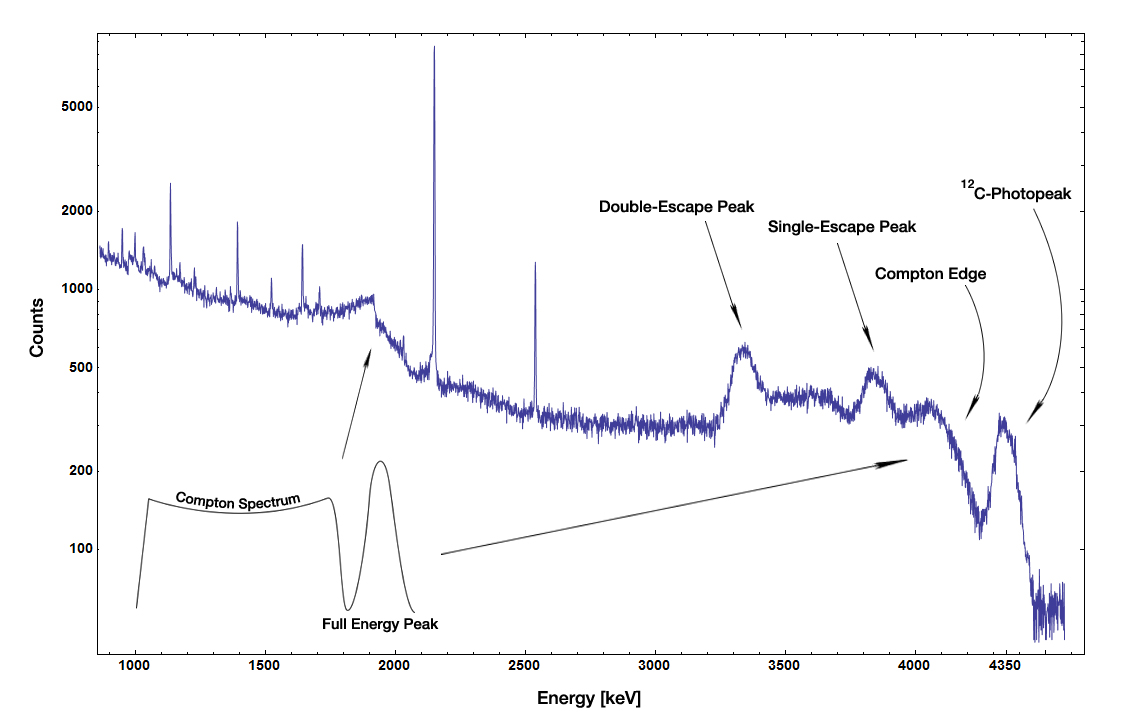 I know that the interactions vary with the incident photon energy (from photoelectric effect to Compton effect to pair production). Therefore, I thought that Compton and pair production deposits more energy?!

In short, the photopeak is formed in the case of complete absorption of the gamma ray's energy in the scintillator or detector, while the Compton edge is the maximum amount of energy absorbed by the scintillator in the process of Compton scattering, where there is an incomplete absorption of the gamma ray's energy as it scatters off of the detector.

A scintillator crystal (and photomultiplier tube) are designed to take a single high-energy gamma ray and turn it into a current pulse proportional to the photon's energy. On a microscopic level, this happens via a multi-step process:

If everything goes perfectly, we get what's called the "photopeak" in the gamma-ray spectrum.

However, sometimes this process fails to capture all of the energy of the incoming gamma ray. This can happen in one of two main ways:

In both cases, the energy deposited in the scintillator crystal is less than the energy of the original particle, since one or more particles have escaped the crystal, taking some energy with them.

[A technical aside: the interactions $e^- + \gamma \to e^-$ and $\gamma \to e^- + e^+ + \gamma$ have to occur in the presence of another particle to make the books balance out for momentum conservation. Usually this other particle is a nucleus, and it's not too hard to show that since a nucleus is much heavier than either an electron or photon, it only ends up with a small fraction of the energy of the original photon.]

I know that the interactions vary with the incident photon energy (from photoelectric effect to Compton effect to pair production).

Between 500 keV and 1100 keV, Compton scattering dominates the interaction probability with a material dependence of $Z$. There are a few other effects such as Raleigh scattering, electron resonance and Thomson scattering, but these are fairly minor in the the overall detector process.

As the excellent answers by Michael Seifert and Jared Popowski state, a single Compton event will always deposit less energy in the detector than the incident photon has. So, while PE does dominate at low energies, it is possible for a Compton event to occur, and this will produce a small Compton-edge in the spectrum even for low energy photons. Photons with $E>500$ keV are expected to have substantial Compton-edges, again associated with a full-energy peak, but lower than $E$.

Occasionally, the secondary photon will interact in the crystal by a subsequent photoelectric event within the time resolution of the detector system and the full energy $E$ might be "counted," but this isn't certain. So for mid-range gamma-energy photons, the Compton events will always show up at a lower energy than the associated full-energy peak.

OTOH, the probability of a large Compton edge increases with $E$, so the Peak:Compton ratio usually decreases with increasing $E$, as illustrated in the graphic you posted.

When $E>2m_e c^2$, the probability of pair production increases and probability of Compton scattering will decrease. Pair production has a broad maximum between 10-30 MeV. And as pointed out by the other answers, a single escape or double-escape maximum could occur due to the escape of the annihilation photons which follow pair-production.

Not the answer you're looking for? Browse other questions tagged photons photoelectric-effect interactions or ask your own question.

3
(What causes) the *other* Compton edge?

4
Photoelectric effect absorption coefficient decreases with energy, why?
0
In compton effect is photon absorbed and then another photon of lesser energy emitted?
0
Can all light-matter interactions be reduced to the photoelectric effect, the Compton scattering, and pair production?
3
Photoelectric Effect and Acceleration