Why does this lightbulb glow faintly when I thouch it with my hand though it's not connected to the AC-source?

Take a look at these three pictures I made of one of our lightbulbs: 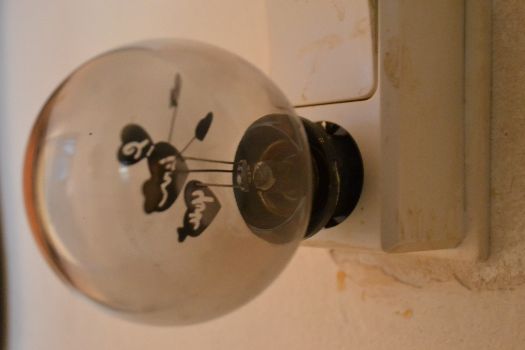 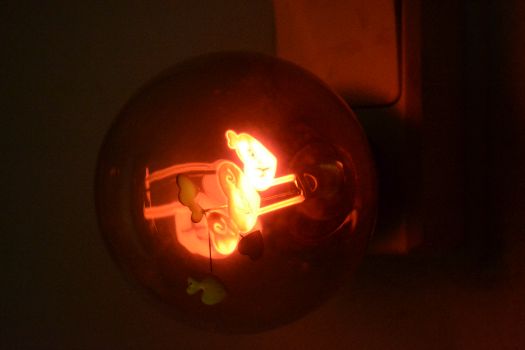 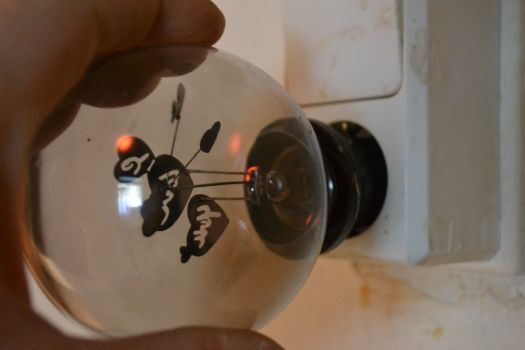 The lightbulb is placed in a fitting which can be put directly in the power socket. In the first picture the bulb is turned loose, so no light comes out. In the second one, you can see the lightbulb shine in its full glory.

It's the third picture that makes me wonder. While the lightbulb isn't connected to the power socket (though the socket itself is connected), you can see a faint glow when I touch the bulb (which is in the same condition as in the first picture: turned out as far as possible out of the socket to let the effect occur). Why does it glow faintly? It seems pretty sure that it has to do with the vicinity of the power socket (with which it is, as I said not connected). Has it something to do with the fact that the AC sends out e.m. radiation? Or what? By the way, I was standing on plastic shoes. It makes me think about these spheres in which you see an ever-changing pattern of "little flashes of lightning", or electric discharges (a Plasma Globe), which tend to go in your hand's direction if you put it on it.

On closer inspection of the bulb, it has two condensator-like plates connected to the AC power supply, but not connected to each other, though I think both of these brightly shining parts are connected to the $220(V)$ part of the AC power supply, and the non-shining part not (or it's connection with the power supply is broke). So it certainly not an incandescent light bulb. You can see also that (while the bulb is giving maximum light) a periodic flickering, of which I'm not surprised if this has the same frequency as the AC frequency of $50(Hz)$. The bulb isn't earthed. Just one more thing. If I put one finger on the bulb the effect is less pronounced than if I put two fingers on opposite sides.

More precise I can't ask the question. I can understand that the two plates (or the two together) are brightly lighted; if you look closely at the first picture you can see three straight pieces of metal entering the bulb. The "big" plates are illuminated, the little ones not. In the second picture, you can see two electric red/orange glowing pieces of straight metal (connected to the two "big" plates, which, like I said are not connected to each other outside but maybe inside) entering the bulb. So you can say that there are capacitor plates loaded with electrons, which causes a glow for the same reason an incandescent bulb produces light (the red/orange color indicates that the AC in the bulb isn't that high). But I can't understand the effect I described. Somehow electricity has to "jump" over the "bridge" where the bulb is disconnected with the AC-source if I put my hand or fingers on it.

I found this article, which shows it's indeed a neon lamp.

Based on the limited information you are giving, it seems that you have a gas discharge light or neon glow lamp (not an incandescent light bulb). The light is produced by electrons accelerated in an applied electric field ionizing the gas atoms/molecules and causing electron transitions which emit light. When one of the electrodes of the lamp is connected to the not grounded terminal of the ac power outlet, the gas discharge can also be initiated when you touch the glass with your hand. The hand is on ground potential so that the ac voltage produces an alternating potential difference between the ungrounded lamp electrode and your hand. This suffices to produce the high electric field at the electrode to produce the gas discharge and the glow light. The low ac current circuit is closed capacitively over your hand, arm and body to the ground. A similar effect using a glow lamp is often used in voltage testers built into screw drivers.

Not the answer you're looking for? Browse other questions tagged electromagnetism electricity capacitance voltage or ask your own question.

0
Current without voltage?
0
Electrons moving in a simple circuit with a battery and a light bulb
2
Light bulbs flashing on when disconnected
2
Are the Earth wire and the Neutral wire the same?
7
Is Light intangible to other Light? And how does all the intersecting light exist in space?
0
Why does a 60W bulb glow brighter than a 100W bulb in a series?
1
How to determine which bulb will be the brightest in the series and parallel connection?