Is nuclear power desireable in the long term, given the fact that it's an unnatural heat input to our planet? [closed]

I've been reflecting on whether we want nuclear at all in the long term (compared to renewables like wind, solar, and hydro). There's a certain amount of heat (energy) entering our planet and leaving it. Greenhouse gases reduce the amount leaving, causing the planet to warm up. Nuclear power increases the input because it's energy that would not be released here without us. But the question to ask is what's the significance of the energy input from nuclear power. Say for example that future society becomes fully powered on fusion reactors, the energy input from these reactors would be roughly $10^{22}$ joules/year (approx 20 times 2013 world energy consumption). We can compare to the total energy input from the sun, which is $10^{25}$ joules/year. From these numbers, the input from nuclear would be about 0.1% the total solar input. Is that enough to cause disturbance to the energy balance of our planet and to worsen any global warming symptoms?

There is a balance between heat input and radiation lost to space. To maintain this balance, if you increase the input by 0.1%, you must do the same to the output. Approximating the earth as a blackbody, the energy it radiates is proportional to the fourth power of the temperature. So the temperature would need to increase by 0.025%. That's less than a tenth of a degree, which doesn't seem very significant.

The answer is "No", and here is the qualitative explanation. The Greenhouse Effect is not about extra energy input at the Earth's surface, nor is it about reducing the thermal output. It is about upwelling.

In the static, ocean-free black body model: consider and sensor in deep space looking back at Earth black-body radiating in the infrared: it does not see the surface, it sees 1-optical depth depth down into the atmosphere, and it is that chunk of atmosphere that is at the correct blackbody temperature to balance the energy input. As you penetrate more optical depths into the atmosphere, it gets hotter, down to the surface, where it's hottest.

So the surface is hottest, radiating isotropically, with energy transfer to cooler regions above, which do the same, and so on. The processes are refer to as upwelling and radiative transfer.

The addition of greenhouse gases increase the optical of the atmosphere, thereby raising the surface temperature without changing the energy input or output.

According to this source, the total solar irradiance of Earth varies-- rather conveniently-- by about 0.1% over decade long solar cycles. Since the climate is very difficult to predict accurately, unfortunately I can't find any widespread consensus on how much this affects climate (although I'm no climate scientist so there may very well be one that a quick search isn't producing). However, it seems likely that these solar cycles have been around much longer than man-made climate change has been an issue. So, at a first glance, I would say that a 0.1% increase of heat input to Earth wouldn't be too big an issue.

EDIT: To address the OP's concern that the cycles involved in the solar cycle are too short lived to make a valid prediction, I went down a rabbit hole of climate science and learned about Milankovitch cycles. Essentially, the obliquity of earth's axis, it's precession, and the eccentricity of Earth's orbit around the sun all vary in long (tens of kYr) cycles. However, only eccentricity actually changes the total yearly insolation of Earth-- according to this source, by about 0.167%.

So, now we have a very long-lived cycle of insolation that we can compare with and get (hopefully) more accurate results. That same pdf helpfully compares a short-time Fourier transform of average global temperature to STFT's of other data-- namely obliquity, eccentricity, precession, and insolation at 65 N in July.

In the pdf, they show that the STFT of eccentricity does in fact coincide with that of temperature for certain frequencies. So, one might be tempted to conclude that the 0.167% change in total insolation caused by eccentricity was responsible for the $12^\circ$C fluctuations in average temperature over 800 kYr, which is certainly a worrying amount! However, there are many other factors at play, as obliquity also shows a strong correlation to temperature even though it doesn't affect global insolation, as does insolation at 65N in July. Of course, this all stems from the fact that the Earth's climate is very chaotic and interconnected. For instance, lower insolation at 65N is more likely to produce ice than at lower latitudes, which leads to higher albedo and a whole bunch of other cascading effects.

The takeaway from this is that it's pretty difficult to know conclusively what would happen if humans dumped an additional 0.1% of total heat into the environment without actually doing it. However, there are natural processes that change heat dumped to the environment by comparable amounts, so it's not completely unprecedented (although the time scales involved are obviously very different). I think it's also important to point out that 20 times the energy usage in 2013 is a very extreme estimate, so the real life effects would probably be significantly milder than this post makes them appear.

Nuclear amounts to =0,005 W/m2, most of it is not thermal, it's light, fridges and mechanical drives.

Greenhouse effect is 1000 - 2000 times more warming for the planet than nuclear. The thermal efficiency of a conventional nuclear power station is around 33%, gas turbine ones are at 60%. Decay efficiency of the waste is nearly zero.

In environmental sciences, they measure Global Economic Systems of energy and chemistry: 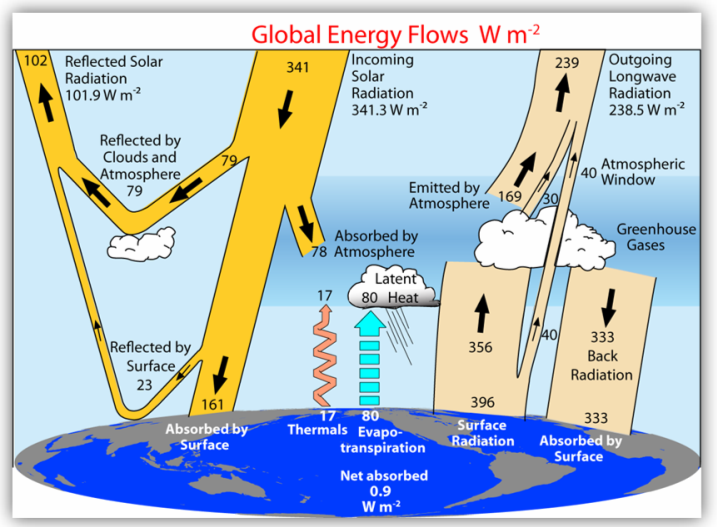 the sun gives us 10,000 times more than all the energy we make, and our energy is used mostly for used for machine drives, TV, communications and lighting.

The others gave the most relevant factor of the equation, which is greenhouse gases. 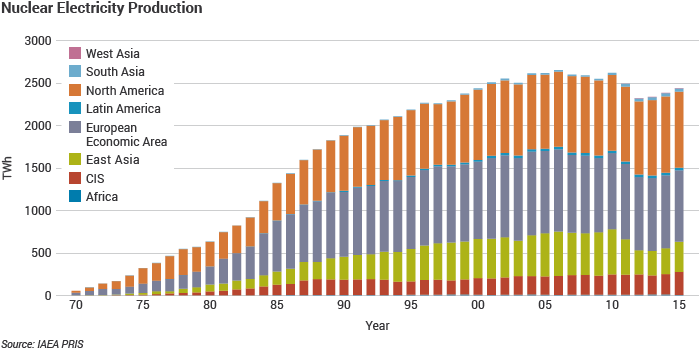 Why would the nuclear energy of unstable elements not turn into heat without us chain reacting it and using it for electricity first?

The radioactive isotopes also give off heat spontaneously as they decay to more stable elements naturally.

It would be interesting to see an estimate of how much energy is generated by spontaneous radioactive decay by all elements in the whole earth as a system. I would be very surprised if our nuclear output would be anywhere near the total amount of energy of all decaying atoms in earths crust and cores, (but I don't have any source for that.)

All known other energy sources including solar and wind energy produce extra waste heat into the planet that would otherwise be lost. All human energy needs are adding extra tiny amounts of energy- nuclear is not special.

Not the answer you're looking for? Browse other questions tagged thermodynamics energy earth renewable-energy climate-science or ask your own question.

0
The effects of nuclear warhead detonations on the Earth's environment and global warming
2
How to combat the black-body temperature of an object?
63
Why don't solar panels contribute to global warming?
17
Theoretical physics for better batteries?
12
Does the second law of thermodynamics imply that renewable energy also leads to global warming/climate change?
0
Solving global warming by moving Earth closer to Mars
3
Is a photovoltaic powered air conditioner neutral to global warming?