Given some coordinates $(x_1,\dots, x_N)$ and $h$ holonomic constraints, it should always be possible to reduce the coordinates to $n=N-h$ generalized coordinates $(q_1,\dots, q_n)$. This is guaranteed by the implicit function theorem (its application of reducing coordinates is briefly mentioned here).

For a constraint $F(x, y) = 0$ concerning only two coordinates, the implicit function theorem states that a function $g$ wherefore $y = g(x)$ exists in a neighbourhood of a point $(x_0, y_0)$ satisfying the constraint only if

However, this is not always the case.

Of course the problem in the example above is easily solved by choosing other initial coordinates, namely polar coordinates $(r, \theta)$. The constraint becomes $F(r, \theta) = r - 1 = 0$, which satisfies both conditions.

Imagine two pendulums hanging from a fixed ceiling tied together by a rigid string:

Choosing $\alpha_1$ and $\alpha_2$ as initial coordinates, there is only one constraint: the $d$-string, the $l$-strings and the ceiling should always form a quadrilateral with given lengths for all sides. 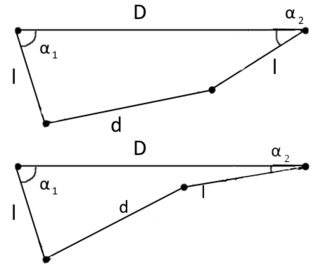 In the previous example this could be solved by choosing different initial coordinates, but I don't know whether this can be done here. This brings me to my questions.

Generally speaking, given a set of coordinates $x_1,\ldots,x_N$ under a set of $h=N-n$ holonomic constraints of the form $F_j(x_1,\ldots,x_N)=0$, you won't be able to find a subset $x_1,\ldots,x_n$ of your original coordinates that will function globally as generalized coordinates: the implicit-function theorem tells you that locally you are guaranteed such a subset, but in general that subset won't work everywhere.

This is kind of the main reason why we work with generalized coordinates $q_1,\ldots,q_n$, because they allow us to re-parametrize the available configuration space in a way that requires fewer coordinate charts. However, even those are not a full solution, because generally speaking the constraints will define the available coordinate space as a manifold which might require two or more charts in its minimal atlas, i.e. you are never guaranteed the existence of a set of coordinates which will work globally. Some examples:

This is why analytical mechanics, when done right (such as e.g. in the style of V.I. Arnol'd) works abstractly with the configuration space as a manifold and acknowledges that coordinate patches can only ever be local - and that that's OK. This means that wherever your configuration space is a regular manifold, you can always find a chart that works, and you can solve the dynamics in an explicit coordinate-dependent fashion there; if the solution wanders off the edge of the chart, then you can always use a separate chart where things are just fine. 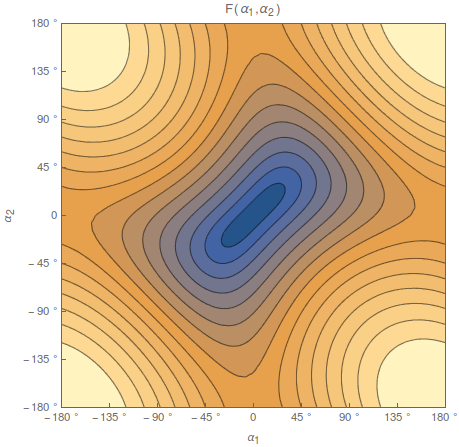 Depending on what $d$ is, your system is confined to one of the contour lines in the plot, and for the most part, these are topological circles of the boringest, most vanilla kind. This means that you can find a single angle-type generalized coordinate that parametrizes the entirety of the configuration-space manifold modulo the same periodicity problems that you get for a particle confined to the unit circle.

This isn't to say that finding that coordinate will be easy, and indeed (i) its analytical form is likely to be quite messy and (ii) this messiness will be reflected and amplified in the Euler-Lagrange equations of motion. In this specific instance I don't think there's anything to be gained by trying to find such a coordinate (as opposed to just using $\alpha_1$ and $\alpha_2$ as independent variables on the charts where they work, obtaining and solving the Euler-Lagrange EOMs on that parametrization, and just being aware of when one might need to switch charts) but ultimately it's a personal choice.

Now, that said, there are some (very specific) situations where the coordinate space might fail to be a manifold, essentially because $F(\alpha_1,\alpha_2)$ fails to have a nonzero gradient. For your problem, this occurs e.g. at the $d=0.9D$ contour line when $l=0.95D$, which looks like this,

i.e. it has a crossing at $\alpha_1=\alpha_2=0$, where the two arms are 'crossed', and you can get out of the configuration by pulling either arm away and making the other one follow, i.e. via two distinct routes. This type of configuration is the worst you'll encounter on the systems you've mentioned ─ but, really, you almost certainly never encounter it, which is why it's generally OK to dismiss the possibility as a pathological corner case for the mathematicians to worry about.

If you do insist on handling it, then what will generally happen from a physicist's perspective is that the system will tend to have some inertia, and that will tend to carry it on the same 'branch' it's going. (Or, in other words, you parametrize the figure-of-eight curve in a regular way, with a self-crossing which you then ignore.) This will work for all cases except those where the system is at the crossing with zero velocity, in which case it will stay there or only arrive asymptotically (but, if you really push things, yes: the lagrangian mechanics are undefined after you reach that kind of a pathological point).

Or, put another way, this kind of problem isn't really a problem.

1
Degrees of freedom in a mechanical system

7
Is there a systematic way to derive constraint equations?
19
Determine if Theory is Unitary from Lagrangian
3
Are the generalized coordinates in Lagrangian mechanics really independent?
2
Generalized coordinates
3
$SU(2)$ symmetry of $\mathcal{L}=\partial_{\mu}\Phi^{\dagger}\partial^{\mu}\Phi - \Phi^{\dagger}M\Phi$
2
Conversion of non-holonomic constraints to holonomic
5
Why is this a non-holonomic constraint?
6
Why do we insert the Lagrangian with some Lagrange multipliers into the Euler-Lagrange-equation?