Direction of spin of a particle after parity transformation

I want to get a basic idea of some symmetries in nature and one that I have across is parity. I have read on the internet that parity transformation can be thought of as a mirror transformation.

However I have stumbled across two different sources which directly contradict one another and so has me confused. If anyone could explain to me which one is correct that would be helpful. 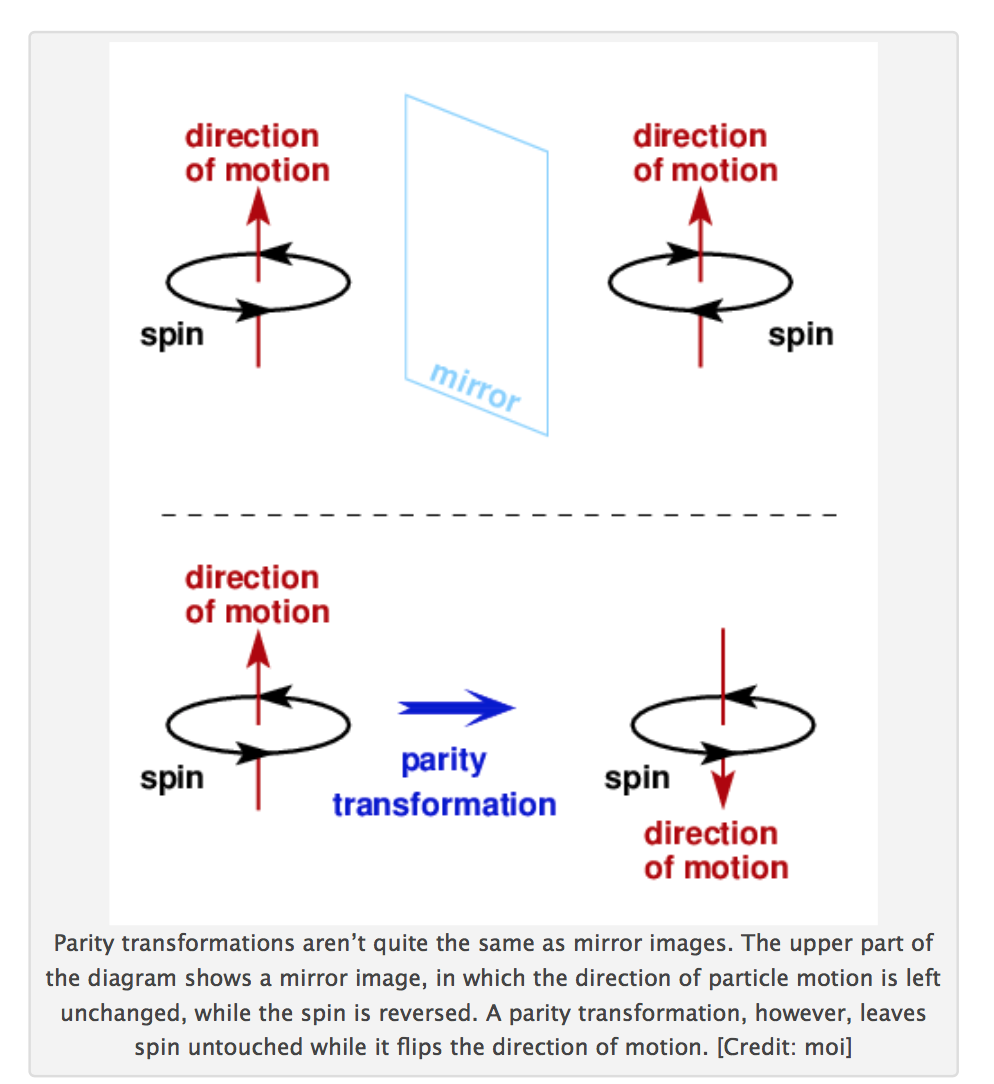 The second source essentially says its not really a micror transformation.

A mirror reflection flips just one of the three components of the
position vector ($x, y, z$).

A parity transformation flips all three components of the position vector:

Now suppose the velocity has only one component. Then the parity operator becomes equal to a mirror reflection. In this case, the parity operation becomes equal to the mirror reflection, after which the handedness for the particle is reversed. The same holds for the parity transformation, which is a combined reversal of all three position components, so also, in this case, the handedness changes.

This is clearly visible in the last picture: turn the velocity of the right particle upside-down, and you have a particle with an opposite handedness from the original particle (just as in the picture where "they" perform a mirror reflection). So the statement that the spin remains untouched (with respect to the velocity of the particle) is not true. In other words, the handedness is reversed.

In the last picture, the spin does remain untouched, but the velocity is reversed, so also the handedness is reversed.

I want to get a basic idea of some symmetries in nature and one that I have across is parity.

You have to distinct between symmetries in (2D-)geometry and in (3D-)nature. Drawing on a transparent sheet a triangle and flipping the sheet you get a mirrored triangle - from the point of view in the 2D-geometry. Going around the sheet - beeing in the 3D-world - you will notice that it is still the same sheet with the same triangle. So our imagination in 2D sometimes prevents us from seeing obvious things.

A better example is a business card. Flip the card and you will see in 2D the back of the card. Now flip it around another axis and you will see that the front of the card is again visible, but the card is rotated. You can do the flip over different diagonals of the card, the result is always the same - after two flips the front is again the front AND you can read the text again. For a business card with mirrored text (a “wrong” card) it isn’t possible to manipulate this card in a way to make it the right card. You’ve got a symmetry braking.

Important is to realize that the spin of the electron and the positron by itself can point in any direction. Only under the influence of an external magnetic field and the motion of these particles the behavior of the spin emanates. Under this circumstances it gets obvious that the spin of these two particles has the parity of -1 (by convention).

The parity of -1 name the fact of some mirror behavior of two particles in 3D. In the upper sketch are shown a lefthanded and a righthanded object in relation to the direction of their motion. These could be two footballs with opposite spin. And really under the influence of the air they will be deflected to the right and to the left. The air is the third component. Not having this spatial basis an observer, moving in the same direction with greater velocity than the footballs, would name the spinning footballs different from the names of a stationary observer. Only seeing the deflection from the air, both observers could agree to the same naming.

Not the answer you're looking for? Browse other questions tagged particle-physics quantum-spin symmetry parity or ask your own question.