Phase diagram. When will I have a phase transition? 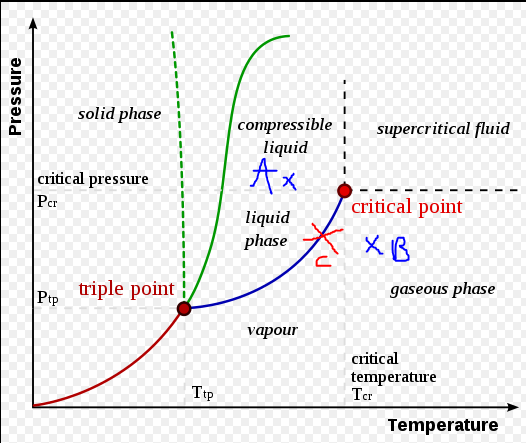 But what I want to know is : which phase do I have at point C.

I know that this is precisely where the phase transition occurs, but imagine I put the pressure and temperature at $(P_c,T_c)$. Will my system have a liquid phase with the "first molecule of gas close to appear", or will it be a gas will the "first molecule of liquid close to appear" ? (I puted quotes because I don't know what is the exact word in english for this). How can I know ?

Does it in fact depend of where I was previously ?

Like if I start from A, go to C then on C it will still be a liquid. But if I started at B and changed temperature and pressure to go to C I would have a gas on C ?

[Edit because of the comment] : To be more accurate in my question, I know from here https://www.uam.es/personal_pdi/ciencias/evelasco/master/tema_III.pdf that two phases coexisting are not stable thermodynamically.

Here is the curve they have : 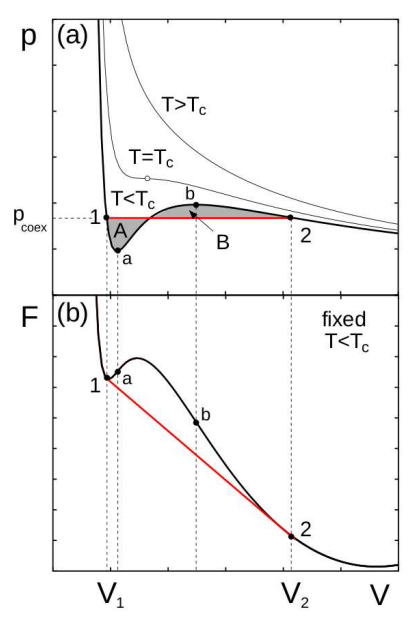 And what they say :

Inside the spinodal line the fluid is unstable, since $\kappa_T^{-1}<0$ , which implies $\frac{\partial P}{\partial V} > 0$, which is not possible for a stable material. If we disregard these unstable states (between ‘a’ and ‘b’), predicted by the theory, we are left with the gas and liquid branches, from small volumes up to ‘a’, and from large volumes up to ‘b’ (i.e. the regions where $\kappa_T^{-1}>0$).

So in the context of thermodynamic we are looking for stability. Thus between between $V_1$ and $a$, $b$ and $V_2$, we have metastability and between a and b we have unstability.

So in conclusion we don't have thermodynamic equilibrium (because we are looking for stable states) when we have two phases (liq+gas).

Thus how can we have a mixture at thermodynamic equilibrium with this explanation, I don't get...

As I said, you have both states along the coexistence line.

Outside the line, the main minimum in Gibbs potential pulls the system to the corresponding state (liquid upside, vapor below, and so on), however, tehre's still another secondary minimun in general, when you are near the line. The secondary minimum is the metastable state, and you can have liquid in the gas region if you're near the line, but this is much less stable than the main state.

The quantities are those who equate the chemical potential $\mu$. That's like the "equation of the lineas", if you're on the lines, the system is forced to satisfy that equality, so the components will react and change phase until both potentials are the same.

Not the answer you're looking for? Browse other questions tagged thermodynamics phase-transition phase-diagram or ask your own question.