Does the bullet cluster prove that dark matter must consist of particles?

Some time ago the remnants of a collision between two galaxy clusters were (accidentally) discovered. These remnants are called the bullet cluster.

There are some theories around to explain the nature of dark matter. They can roughly be divided into two groups:

Theories of a modified gravity make the prediction that dark matter is tied to normal matter. Now in pictures of the bullet cluster, it seems like matter and dark matter are clearly separated. Does this prove that dark matter has to consist out of particles? 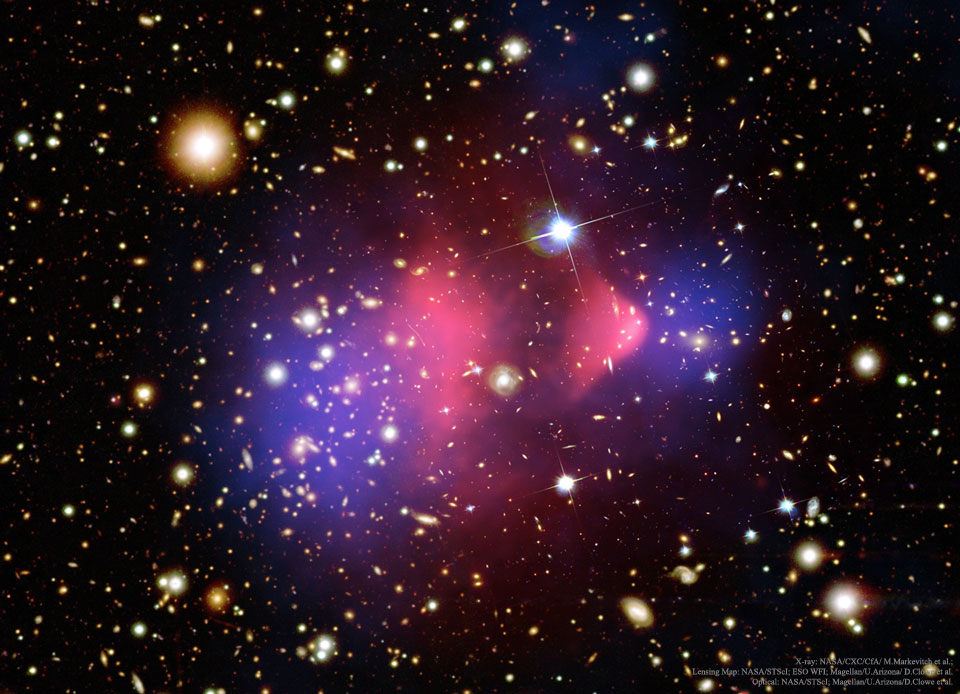 Systems in which dark matter seems separable from normal matter are indeed suggestive that a particle picture is more appropriate. The bullet cluster is one good example; another is on galaxy scales where some models suggest that the central dark matter content could be re-distributed by a rapidly changing gravitational potential (e.g. sourced by violent gas motions driven by exploding stars). I've heard one proponent of such models, Prof. Read, put it as something like "if you can kick it around, it must be real" which I think is a nice summary in colloquial terms.

On the other hand, there are systems where the dark matter effect seems intimately coupled to the distribution of luminous matter. One recent and well-known argument in this direction can be found in this article, though there are many others. A modification of the gravitational force law might seem more natural to explain these systems.

Which picture seems most appropriate depends on which systems you prefer to look at. There are pros and cons to both interpretations (I recommend that article as I think it gives a nice overview and I think is reasonably accessible to non-experts). In the absence of an actual detection of a particle, either directly (e.g. particle collider or nuclear recoil) or indirectly (unambiguous annihilation or decay radiation signal), it is going to be very difficult to argue that anything is proven, though I think a sufficiently compelling demonstration that "it can be kicked" might be enough to convince many.

Finally, here is an excellent caption from the people at NASA:APOD to the iconic bullet cluster image, highlighting the different possible interpretations (the version at their website is linked to references):

What's the matter with the Bullet Cluster? This massive cluster of galaxies (1E 0657-558) creates gravitational lens distortions of background galaxies in a way that has been interpreted as strong evidence for the leading theory: that dark matter exists within. Different recent analyses, though, indicate that a less popular alternative - modifying gravity - could explain cluster dynamics without dark matter, and provide a more likely progenitor scenario as well. Currently, the two scientific hypotheses are competing to explain the observations: it's invisible matter versus amended gravity. The duel is dramatic as a clear Bullet-proof example of dark matter would shatter the simplicity of modified gravity theories. For the near future, the battle over the Bullet cluster is likely to continue as new observations, computer simulations, and analyses are completed. The featured image is a Hubble/Chandra/Magellan composite with red depicting the X-rays emitted by hot gas, and blue depicting the suggested separated dark matter distribution.

Not the answer you're looking for? Browse other questions tagged gravity astrophysics dark-matter galaxies or ask your own question.

50
Are modified theories of gravity credible?
6
Does conformal gravity explain the Bullet cluster lensing effects?
9
Can curvature waves in f(R) theories explain gravitational lensing in cluster collisions?
3
What effects would a finding of Gravitational Repulsion Between Matter and Anti-Matter in the ALPHA Experiment have on Mainstream Theory?
2
How can there be regions in space with only dark matter in it, if dark matter derives from entropic gravity?
7
Emergent Gravity theory by Verlinde
2
What's the definition of repulsive gravity?
1
Do the Bullet Cluster remnants prove that dark matter consists out of particles?
0
Does gravity affect dark matter?