Do the distances and velocities observed from galaxies other than Milky way really show that every point in the universe is the center?

Hubble's observation from redshift shows a pattern that the speed of the galaxies is proportional to their distance, by using those informations we can map the position of the galaxies.

But these observations were made just from Earth. So what I am asking is, do the observed distances between other galaxies other than Milky way (ie. distances between galaxyA , galaxyB and galaxyC) show that their velocities also follow Hubble’s pattern?

Are we certain that if we live in another galaxy, we will see other galaxies moving away from us following Hubble’s pattern? Or is it an assumption made just from observations on Earth that every point in the universe is the center?

So that I can rule out the idea that we see other galaxies moving away from us in that pattern because Milky Way is near to the center of the universe.

the data showing the Hubble expansion, where the farther from us a galaxy is the faster it is receding from us, can be used to demonstrate that no matter where you make that observation, you will always see the same thing going on. To avoid math, try the following experiment: take a wide rubber band and make a series of closely but evenly-spaced dots on it with a ball point pen. now stretch the rubber band so the points move apart from each other. as you do this, imagine yourself situated at one dot or another on the band and ask yourself what you would see from that vantage point. No matter which dot you pick, you will always experience the dots on either side of you moving away from you.

Well, we can first think about this in terms of simple likeliness;

Of course it would be quite difficult (maybe impossible) to gather enough evidence to prove the former conjecture (isotropic and homogeneous expansion of space) over the latter (radial expansion of space centered on the milky way). The latter seems to be a much bolder claim than the former, though. The assumption at work is mainly a statistical one- if the expansion of space is centered on one local area, and the universe is presumably infinite (at least inconceivably large), then it is overwhelmingly unlikely that life, and specifically you, would arise in that local area.

So, we find ourselves in a universe where all galaxies are receding from us. Two possible conclusions are those stated above. One of them (that we are at the center of the universe) is overwhelmingly unlikely, so there is hardly any reason not to discard it.

Perhaps more (or less) compelling is the argument from relativity. Assuming that the expansion is centered anywhere at all breaks isotropy and homogeneity (conveniences that maybe we can do without) and more generally the principle of relativity (which we really cannot do without). That is, that the laws of physics have the same form in all admissible frames of reference. Without the principle of relativity, GR completely breaks, as does $\Lambda$CDM or almost any similar cosmologies. Now, it's fine for those things to break, as long as you have an alternative that describes nature equally as well or better. And people have tried that for a long time. But, no dice. The assumption of relativity has never once been broken, and GR has withstood impressive foes.

Short answer: Us being located at the center of the universe is pretty unlikely. More importantly, our current assumptions about the way the universe works, which so far have proven to be robust, suggest a uniform expansion.

The former is true. The universe isn't expanding from a point, but rather it's expanding uniformly, and every observer sees every other observer as receding. As a result there is no "center of the universe". See this page. I quote: "In 1929 Edwin Hubble announced that he had measured the speed of galaxies at different distances from us, and had discovered that the farther they were, the faster they were receding. This might suggest that we are at the centre of the expanding universe, but in fact if the universe is expanding uniformly according to Hubble's law, then it will appear to do so from any vantage point" (emphasis mine). For more details, see the rest of the discussion on the page.

This is what observations tell us:

To fit the expansion and many other observations, the current standard model of cosmology is the Big Bang model. The word "model" means we have found a mathematical representation which, with the fewest possible postulates( equivalent to axioms in mathematics) describes within errors a large number of observations. 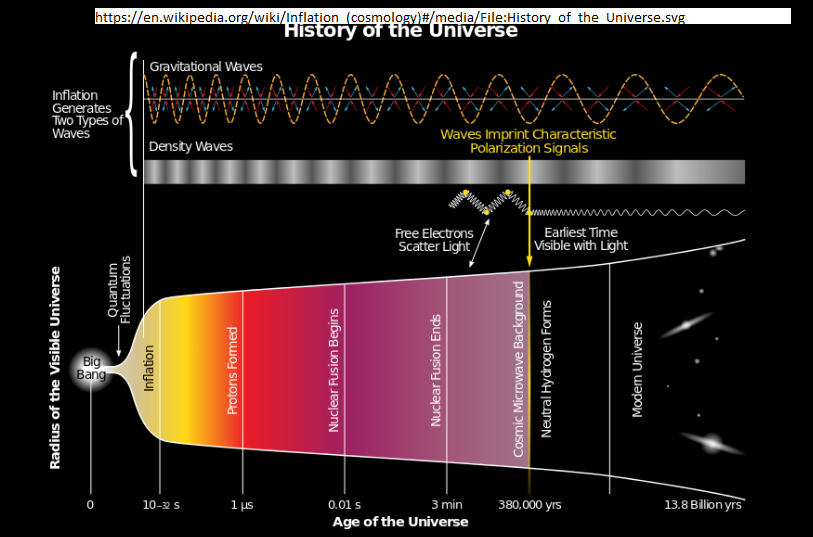 History of the universe

In this plot, the balloon surface is an analogue of a transverse slice of the history, at a given time.

The Big Bang model has been evolving through the years, but the basic ingredients of special and general relativity are a backbone in the postulates, which is not changing.

The first naive model assumed that all matter/energy in the universe was at a singularity at the origin at (0,0,0,t=0), a four vector assigned to the point. New observations and development of theories, plus the necessity of consistency of gravitation with quantum mechanics, have modified this original "point" to a fuzzy quantum mechanical region, but still , all matter in the universe started from that region and is distancing itself as time goes on.

This is a model which fits observations and data, it is predictive, and the best we have up to now. It is at the frontier of research, but the rough lines will not change, because General Relativity is well validated, and also special relativity, i.e. the four dimensional form of space time will stay as is.

The model would not fit the data and observations ,if the center of the universe were only where we are. From gravitational lensing to spectroscopy from distanced sources to the cosmic microwave background radiation (why would it be uniform all through the skies if it is traveling away from us? there should be directionality) the current model fits data and observations .

Not the answer you're looking for? Browse other questions tagged cosmology universe space-expansion galaxies redshift or ask your own question.